Benin is a poor country, though not the worst affected in West Africa. Living conditions for residents have improved during the 2000s and 2010s, thanks to measures taken to combat poverty.

At least a quarter of the population does not have access to clean drinking water and sanitation conditions are poor. Child mortality has decreased sharply, but malnutrition is still a major problem among Beninese children and maternal mortality remains high.

Health care has major shortcomings. The shortage of doctors is very large. Malaria is the most prevalent disease and still harbors the most victims, while one percent of the population is estimated to live with HIV/AIDS. The situation is generally worse in the countryside than in the cities. 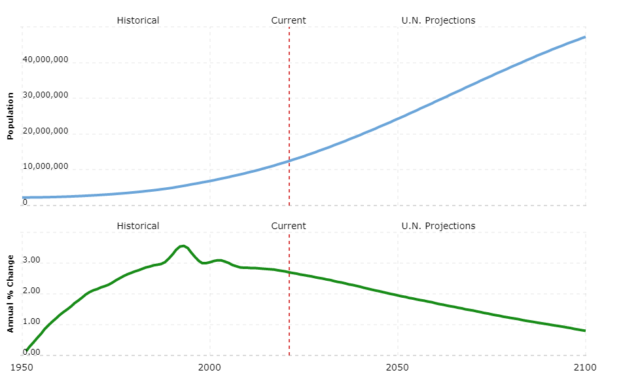 There is hardly any general social safety net to speak of. Instead, people rely on independent organizations (NGOs) and the family/clan if they need help.

Although gender equality is enshrined in the constitution, women in Benin are discriminated against, especially in rural areas where traditional legislation exists (see Political system). Among other things, they are often denied the right to inherit property or own land. Around eighth women are estimated to have been subjected to genital mutilation, although prohibited by law, but awareness campaigns help to reduce the number of interventions.

Benin has been identified as something of a regional hub for trafficking children for plantations, mines and households or for prostitution. The government has tried to fight human trafficking through, for example, legislation, media campaigns and increased police efforts. Benin and several other West African countries have signed an agreement to fight child trafficking jointly.

Child labor is also common in Benin, although it is forbidden for children under 14 to work. Above all, it is girls who are forced to work instead of going to school. A widespread tradition among poor families in rural areas is to send children to relatives or wealthy families in the cities who need help in the household. Often the children are forced to live under difficult conditions and sexual exploitation occurs.

Homosexuality is not illegal but hardly socially accepted.

Proportion of population with access to clean water: 67.0 percent (2015)

Proportion of the population having access to toilets: 16.5 percent (2017)

Proportion of women in parliament: 7 percent (2018)

Three people are arrested on suspicion of trying to poison President Yayi. The arrested are a sibling of Yayi, a former minister and Yayi’s personal doctor. A businessman who has been close to the president but has fallen into disbelief is suspected to be behind the attempted murder.