In Egypt, there are huge differences between rich and poor. The proportion of poor people in the population decreased over several years, but the trend has reversed. Nearly one-third of Egyptians live below the poverty line, according to official statistics published in the summer of 2019.

The global financial crisis 2008-2009 and the unrest following the 2011 revolution have contributed to increased food insecurity and increased malnutrition. At least every fifth child is believed to suffer from inhibited growth.

Poverty is particularly widespread in rural areas and not least in the southern, southern parts of the country. There, over half the population is counted as poor. But slum and inadequate community service characterize Cairo and Alexandria, which are overpopulated by rural immigration and high birth rates. However, childbirth has decreased significantly. 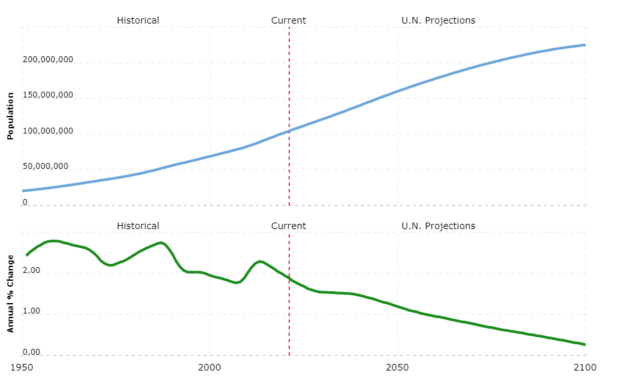 Public health is adversely affected by the fact that large groups suffer from a lack of good quality food and live under unhygienic conditions. Health care is relatively well developed in the cities, but it is unevenly distributed with major shortcomings in southern Egypt and in the slums of big cities. Private organizations, mainly Islamic, account for much of the basic health care.

The social insurance system for employees includes sickness, occupational injury and life insurance as well as unemployment benefits, maternity allowance and old-age pension. However, the increase in population and budget savings have eroded social services. Large population groups are outside the formal economy and are not covered by the insurance system, but a new health insurance system is being prepared (see Calendar).

Three-fifths of adults are overweight, according to WHO. Egypt is one of ten countries in the world where diabetes is most common, according to a study presented in 2015. It is also one of the countries that has been severely affected by bird flu.

In the cities, in principle, everyone has access to running water, and in the countryside it is stated that 93 percent of the residents. But interruptions are common and the water quality is often poor.

About two-thirds of rural women are illiterate. Child labor is common, especially in rural areas.

Egyptian society is hierarchical and the background of the family is more important than absolute wealth. Education is highly valued and those who can afford invest a lot in their children’s education, including low-income earners. People also get respect through age. The younger ones are expected to adhere to the older ones and the oldest man in this context is expected to make decisions that benefit the family.

The genus plays a major role in all social relationships. The ideal family is the extended family, but most Egyptians, especially in the cities, now live in nuclear families.

The family survives through inheritance from father to son. A son is generally valued higher than a daughter, although they often receive as much love and attention in their early years. The man manages the family’s income and assets. The woman is expected to respect her husband and has primary responsibility for children and households.

In a comparative study published in 2013 on respect for women’s rights in 22 Arab countries, Egypt came in last place.

An important decision, however, is to influence women: who she will marry (although both her family and so-called marriage mediators are involved in the negotiations). The trend, especially in the urban middle class, is towards the spouses being more equal in age and education. Sex before marriage is not accepted and almost all couples get married.

Marriage between cousins ​​is common. Polygamy is not prohibited but is becoming less common, around five percent of Muslim men have more than one wife. Divorce totals are high. In the Coptic Christian minority neither polygamy nor divorce is allowed.

Although the law advocates equality between women and men, there are some discriminatory statutes for women, not least with regard to her personal status (marriage, divorce, custody, inheritance law). Under Islamic law, sons are to inherit twice as much as daughters and often the daughters’ portion of the inheritance is negotiated away. After divorce, the woman is allowed to retain custody of the children while they are young, then the children accrue to the man. In all social strata of Egypt, having children is considered to be the greatest gift of all. Not being able to have children is in many ways the worst thing that can affect a woman.

Women’s trafficking is not prohibited by law, the same goes for rape in marriage. But campaigns against the violence have been carried out and the discussion about criminalizing domestic abuse has reached Parliament. A central concept is honor. A person’s honor depends on the reputation and honor of each member of the family. For female family members, the concept of honor is primarily linked to their sexuality, which is therefore carefully controlled. Honor-related violence against women is widespread. Traditionally, a woman is not allowed to be seen with men outside her family. However, this does not apply as strictly in major cities. However, men and women are still often separated in daily life, for example by different train carriages or separate queues.

Another crime against women is genital mutilation, which occurs both among Christians and among Muslims. The interventions are common in Egypt and down in the Horn of Africa, however, not in the Arab world at large. The majority of all Egyptian girls are sexually assaulted when they reach puberty – despite the fact that hospitals are not allowed to perform the procedure and even though it is prohibited by Egyptian law. A change for the better is that the issue is now also being discussed more openly. The first convictions in a case involving genital mutilation came in 2015, when a doctor received two years in prison and the father of a 13-year-old girl who died after the procedure was given three months conditional. A survey conducted by the UN Children’s Fund in 2016 showed that 87 percent of women aged 15-49 were sexually abused, which meant a reduction compared to previous surveys. But it is difficult to get reliable results. An experience like genital mutilation does not want many to discuss with unknown interviewers, and most procedures are not done at clinics where medical records are kept.

In the labor market, women often have lower wages. Women are strongly under-represented in the formal labor market, in political life and in the justice system. In parts of the state administration, however, a relatively large number of women are in high standing.

Egypt was one of the first countries to ratify the UN Convention on the Rights of the Child and has since taken several steps to implement it. In 1996, a children’s law was adopted and in 1998 a national council for children’s issues was established. But despite political intentions, there is a great need for improvement. Poverty still represents the greatest threat to children’s lives and health. No one knows how many street children there are in Egypt, but the number is said to have increased in recent years. The Children’s Act gives the police the opportunity to arrest children who are begging, being homeless or schooling. Children are sometimes held captive with adults at risk of being abused.

Although there is a ban on child labor, many children are forced to leave school to begin work and contribute to the family’s livelihood. It is especially common for girls to leave school early. Unemployment among young people is very high.

Discrimination due to sexual orientation occurs. Gay and bisexuality is not prohibited by law, but committing homosexual acts in public is a criminal offense. Homosexuals have been convicted of moral crimes and it is difficult to live openly as gay or bisexual.

Many disabled people are forced to live a secluded life without care, therapy or work even if they are entitled to positive discrimination according to law.

Proportion of population with access to clean water: 98.4 percent (2015)

Proportion of the population having access to toilets: 94.2 percent (2017)

Public expenditure on health care as a percentage of GDP: 4.2 percent (2015)