Ecuador is one of the countries with the most unequal distribution of income in the world, although differences have diminished in the 2000s. The proportion of poor people according to national standards has decreased from 64 percent at the turn of the millennium to 23 percent in 2018.

Not least, the redistribution policy carried out during Rafael Correa’s first year as president, from 2007, contributed to a narrowing of gaps. Social investments were made and at the same time, oil revenues were high, giving the state revenues. The collapse of the oil price from 2014 has helped the proportion of poor people to start to increase again.

The health sector has major shortcomings. In rural areas, healthcare is poorly developed, and in urban slums, there is a lack of clean water and hygienic conditions are poor. This, along with malnutrition, are common causes of illness, with almost every fourth child under five suffering from malnutrition. The upper and middle classes usually turn to private healthcare. A growing problem is that more and more Ecuadorians are suffering from Western welfare diseases such as obesity, diabetes and high blood pressure. 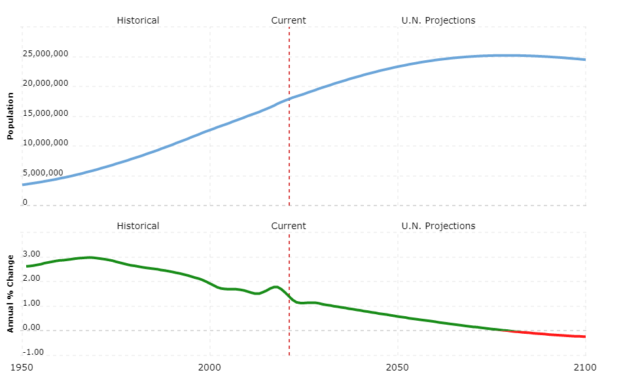 The then-new president Rafael Correa declared in March 2007 “state of emergency” in the health sector. He then channeled more money into health care. Thanks to the country’s oil income, he was also able to introduce a state monthly contribution to the very poorest and single mothers. Oil revenues also allowed some expansion of a social insurance system for those who have or have been employed. The system includes, among other things, old-age and sickness pensions, child allowances and free health care for children and the elderly. However, most Ecuadorians are still outside these safety nets.

Abortion is only allowed in serious threats to the life and health of a woman or, in some cases, after a rape. Nonetheless, abortions are common, but few of them are legal. Women who undergo abortions run the risk of being sentenced to between six months and two years in prison.

In Ecuador, human smuggling is a major problem. The victims are both women and children who are sold to prostitution or forced labor. Crime has increased as the Colombian drug mafia branches into the country.

At the top of the social hierarchy is the country’s small white Spanish upper class, consisting mainly of large property owners in the mountain areas, plantation owners on the coast as well as finance and industrial men.

The middle class is relatively small but growing. It is made up of, among others, businessmen, middle-class military, bureaucrats, middle managers in companies, as well as highly educated people such as doctors, teachers and lawyers. The middle class lives mainly in the cities and is usually a misery (see Population and languages).

At the bottom of the social ladder are the indigenous peoples and Africans. They are usually small farmers or landless farmers in the countryside, while they can be factory workers, street vendors or urban craftsmen.

The family is the most important social unit in society, in all social groups. A family usually consists of husband, wife, unmarried children and sometimes older relatives, who should be treated kindly and with respect. Old parents usually live with the youngest son and his wife. It is common for the youngest son with his wife to stay in the parents’ home and eventually take over the household, while the parents remain.

More than one in five girls are married before she turns 18, but that may change. Until 2015, girls could legally marry at the age of 12 and boys at 14. Now the age limit is 18 for both sexes.

The tradition of godparents (compadrazgo) is strong. The godparents are appointed by the child’s parents prior to the baptism and then have financial obligations to the godchild, among other things. They are also expected to provide advice and support to the child throughout life.

Ecuador is still male-dominated. Even though politics and legislation attach increasing importance to gender equality, the outlook in society is still often conservative. In general, it is the woman who takes responsibility for children and households, while the man works for employment. But at least in the cities, this distribution of roles is slowly loosening up, as both parents increasingly work professionally and share in the different chores of the home. However, it is still rare for women in positions of power in public life, although the number of women in higher positions in the state administration and academia is increasing.

In working life, women have on average significantly lower wages than men. Seven out of ten women have no income of their own.

Women have legal rights to their children and their property.

A serious problem is the widespread trafficking of human beings, which affects women severely. The victims risk being sold to prostitution and other forced labor. There is a special ombudsman for women as well as a state council for women.

The lives of children and young people

All Ecuadorian children should attend school from the age of 5 to 15. But because school uniforms are compulsory and expensive, poor families can rarely afford to send all their children to school at the same time without the siblings being allowed to turn around – those who do not attend school can help with the family’s livelihood.

In the mountain areas, the students have two months of summer leave, while the children on the coast are free during the rainy season between January and March. In leisure time, soccer and volleyball are the most popular among boys, while girls like to play tennis, basketball and volleyball. A common leisure pleasure is to camp in forests and land. Some go rock climbing in the Andes.

There is a special law for minors aimed at protecting the rights of children and young people. Political awareness of children’s rights has increased.

But there is still a high proportion of child laborers in Ecuador, not least on the coastal plantations. The widespread human trafficking also affects the children who fall victim to the smugglers. The children are sold both for forced labor and for sexual exploitation. It also happens that children are subjected to domestic violence and sexual abuse.

For young people it is common to hang out with both girls and guys. But a teenage girl must ask her parents for permission before going out alone with a guy. The nightlife is rather sparse in smaller cities and in the countryside, while there are plenty of bars and clubs in Quito and Guayaquil.

When the girls reach the age of 15, a so-called quinceañera (a celebration to celebrate the girl’s becoming an adult) is held. A quinceañera begins with a Catholic service and ends with a private party. The object of the party wears a pink dress. An important step is when the father gives the girl her first high-heeled shoes and dances a drum with her. After the quinceanera, it is common for girls to start dating.

University studies are unusual (about five percent of children in cities and one percent in rural areas), even though the country has around 400 higher education institutions.

The Constitution prohibits discrimination on grounds of sexual orientation and gender identity. Same-sex marriage was approved by a decision in the Constitutional Court in 2019. However, it does happen that the rights of LGBT people are violated according to human rights organizations in the country. Harassment and abuse occur, even from police officers who are rarely punished for the crimes.

Proportion of population with access to clean water: 92.6 percent (2015)

Proportion of the population having access to toilets: 88.0 percent (2017)

Public expenditure on health care as a percentage of GDP: 8.5 percent (2015)