The social insurance system includes, among other things, worker protection, unemployment benefits, maternity allowance and family allowances. The pension system has changed several times since the 1980s and continues to be a contentious political issue in Chile.

During the Pinochet regime, a private pension system was introduced, which served as a model for many countries much later. Instead of those who are at work paying for those who have retired, a system was created whereby workers save for their own pensions, in private funds. But the new system became a problem for a large proportion of the population who were unable to make adequate payments, even for a minimum pension.

Therefore, during Michele Bachelet’s first presidential term, 2006-2010, pension system reforms were initiated. On the recommendation of the World Bank, a tax-financed “solidarity pension system” was introduced, based on VAT income. It forms part of the social insurance system and is intended to guarantee a minimum pension for low-income earners. 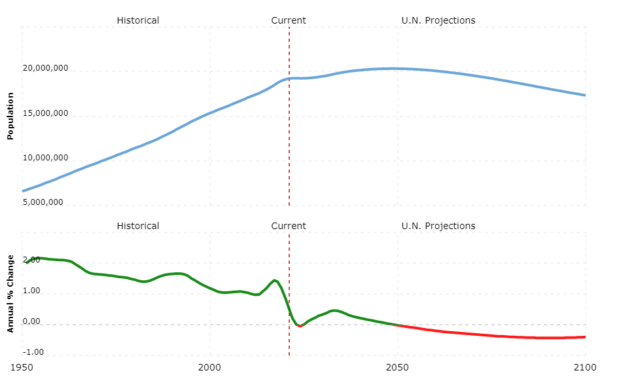 Chileans pay 10 percent of their salary to the pension funds (Administradores de Fondos de Pensiones, AFP). The administrators charge fees and then invest the money in the capital market, which has contributed to good growth in Chile. Today there are six AFP funds with a total value of around $ 200 billion.

Despite this, an average Chilean receives a significantly lower pension than the average OECD citizen. A study added in 2014 showed that the median pension was 34 percent of the last salary. With the aid of the “solidarity pension system” the figure rose to 45 percent.

Many Chileans are forced to continue working after retirement, which is 60 for women and 65 for men.

When the system was introduced in 1981, police and military were exempted from the change, which means that their pensions are based on the old system and therefore receive significantly higher pensions than others. Of course, it sticks in the eyes of many.

Dissatisfaction with the pension system has repeatedly gathered hundreds of thousands of citizens for extensive demonstrations over the years.

Sebastián Piñera, who returned as president in 2018, wants to get a new overhaul of the pension system (the president’s brother José Piñera, incidentally, was the architect of the privatized system introduced in the 1980s).

The standard of healthcare varies widely. Public care suffers from a lack of resources and long queues, while private care has a higher standard. The health insurance system was partially privatized in 1981 during the Pinochet regime. Previously, everyone had paid 4 percent of their salary to the state health insurance Fondo Nacional de Salud (Fonasa). From 1981 it became possible to join private sickness funds called the Instituciones de Salud Previsional (Isapres). In 1997, almost one in four Chileans had private health insurance. The escape from Fonasa led to financial problems for the state sickness fund, which caused the government to raise the monthly fee to 7 percent of salary. Fonasa’s increased resources diminished interest in the private alternatives, which today only comprise about 15 percent of the Chileans. Many who have paid for private health insurance for years have returned to Fonasa when they were charged higher fees to have age-related ailments treated. Private Isapres may also refuse to insure people with some already known medical problems.

In 2005, the government passed a law that forces all health insurance companies to pay the health care costs for 56 selected ailments.

40 percent of those who get their medical expenses covered by Fonasa are so poor that they have never been able to pay anything to the system. By law, they are still entitled to elementary free medical care.

However, the health situation has improved over the last 20 years, not least thanks to investments in preventive measures such as water treatment, better sewage and vaccination programs. Average life expectancy has increased from 62 in 1970 to 80 today. Child mortality has decreased sharply and maternal mortality is also low. However, Chile has an unusually high proportion of diabetics.

Chile is perhaps the richest country in Latin America and most Chileans have been doing better during the strong economic growth of the last 20 years. At the same time, Chile is one of the countries where the class divide is still the largest. Governments have been aware of the problem and have tried, and partially succeeded, to do something about it. A relatively well-ordered middle class has grown in recent decades and is increasing in size.

Today’s upper class largely has its roots in the old land-owning families of European origin who came to Chile early and created great wealth. The indigenous indigenous people often belong to the Chileans who have the worst. Yet ethnicity is not the main class marker, since such a large proportion of Chileans are of mixed European and foreign. It is instead such as where you live (the residential areas are often extremely segregated), what school you go / have gone to, how to speak (although Chile is so far there are almost no dialectal differences, all Chileans speak Spanish but the way of speaking reveals immediately which class you belong to) and also how to dress. It is possible to “work up” but it is not obvious that you are accepted as “upper class” because you have succeeded in reaching a high position or become rich.

The family is extremely important to the Chileans and most live in some form of family. Single-family homes are still unusual and most live at home with their parents until they get married. Socializing is often lively also with the larger family, who usually celebrate holidays and different holidays together. It is also common for older parents, especially if they have become widows, to stay at home with their adult children. Older people are generally regarded with respect.

Chileans marry early but no longer have as many children as before and birth rates are among the lowest in Latin America. Divorce is allowed since 2004 and 2015 a law on registered partnership for same-sex couples was passed. Abortions were totally banned from 1989 (with illegal abortions as a result and injuries that must be treated in connection with these) even when the woman’s life was at stake. The total ban introduced by the Pinochet regime, according to opinion polls, lacked public support, but proposals for legislative changes were halted a number of times in Congress, which partly reflects the strong position of the church. In 2015, President Bachelet again submitted a proposal to legalize abortion after a rape, when the mother’s life is in danger and if the fetus is so badly damaged that the child cannot survive.

Contraceptives are allowed. Although Chilean law states that men and women have equal rights, Chile is in many ways still a male-chauvinistic and unequal society, where the man is still seen as the “master of the house” and women are expected to take the main responsibility for home and children. But attitudes are slowly changing through legislation and because more and more women are gaining higher education and entering the labor market. Here Michelle Bachelet played an important role as role model during her first term as president during the second half of the 1990s. However, women’s liberation applies mainly to the younger generation in the upper and middle classes; it is viewed with suspicion by the Mapuche woman in the countryside who continues to live by old standards.

Public expenditure on health care as a percentage of GDP: 8.1 percent (2015)