Chad falls into the bottom tier when the UN agency UNDP lists the level of development in the countries of the world. When the list is created, aspects such as income, literacy, average life expectancy, child mortality and more are taken into account.

Poverty is widespread. According to the UNDP, over 60 percent of Chadians live in poverty; other sources talk about as many as 80 percent. Although Chad has been an oil-producing nation since 2003, the gap between rich and poor is said to have widened. Most of the poor live in the countryside.

Health care is crying insufficient, especially in rural areas. Many can only receive care at mobile clinics run by churches and charities. Malnutrition is common. Although child mortality declines and life expectancy increases, the figures are disappointing. 14 out of 100 children die before the age of 5 and an average Chadian may not experience his or her 55th birthday. 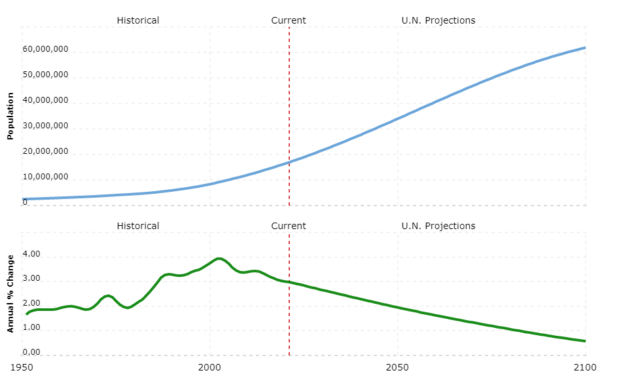 Only half of Chadians have access to clean water, and nine out of ten live in the absence of sewage. Gastrointestinal disorders are common such as polio, epidemic jaundice, malaria and tuberculosis. According to the UN, 2.5 percent of the adult population is HIV-infected.

Most Chadians lack social protection networks and rely on support from family and friends in the event of illness, unemployment and other problems. Anyone who has a formal employment in government, military, or governmental companies is entitled to some social benefits.

The rights of women are poorly protected in law and in everyday life. Genital mutilation of girls is a widespread phenomenon. Rape can lead to harsh punishment, but sexual harassment is not considered a crime and is reported to be common. Although the law prohibits violence against women, police rarely intervene in domestic violence. Children’s legal position is weak and girls can be married off already at 12 – 13 years of age.

Proportion of population with access to clean water: 42.5 percent (2015)

Proportion of the population having access to toilets: 8.3 percent (2017)

Public expenditure on health care as a percentage of GDP: 4.6 percent (2015)

Habré will be tried in Senegal

The Senegal government concludes an agreement with the African Union (AU) to set up a special court to investigate Chad’s President Hissène Habré (see Modern History).

The ICJ urges Senegal to act in the Habré case

The International Court of Justice (ICJ) in The Hague orders Senegal authorities to “without delay” either bring Chad’s former President Hissène Habré to trial or extradite him to Belgium. Belgium has asked Habré to be extradited by a law that allows Belgian courts to investigate human rights violations regardless of where the crime was committed.