Turkey is an unequal society in many ways. Income levels are far below those in Western Europe. The differences are also large within the country.

Nearly one million Kurdish villagers were expelled from their homes in the southeast during the civil war of 1984-1999. Even more have left southeast Turkey on their own initiative. In the autumn of 2012, the Council of Europe estimated that Turkey was the European country with the most internal refugees, about one million people. Most had been driven away by the fighting in the southeast. In addition, refugees from other parts of the Syrian civil war have reached 3.6 million people, according to official estimates from the end of 2018.

The social security system is financed by employers ‘and employees’ premiums and applies only to those who have a formal employment. The system includes pensions, compensation for work injuries, sickness pension, unemployment insurance (introduced in 1999) and maternity benefit. The average time for maternity leave from work in Turkish companies was stated at the beginning of 2010 to be 16 weeks. In 2016, new laws were passed on increased child allowance and the right to unpaid leave after ordinary maternity leave, as well as for both parents’ right to work part-time until the child starts compulsory pre-school. 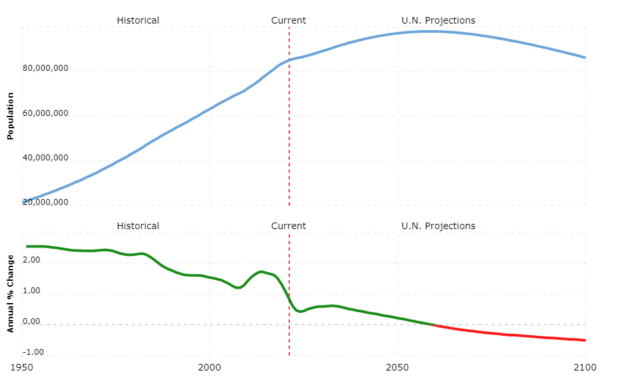 All employees are legally entitled to paid leave for between 14 and 26 days, depending on how long they have been employed.

The state is responsible for most of the health care, but in the countryside it is inadequate. In eastern Turkey, there is a shortage of doctors and hospitals.

A bill that would have practically made it impossible to have abortions was withdrawn by the government in 2012 following protests from women’s organizations. According to the proposal, abortions should have been banned after the sixth week of pregnancy, instead of the tenth week according to current law. As early as the sixth week, not all women are aware that they are pregnant. There are reports that state hospitals have refused to perform abortions despite the law. Authorities’ attitudes toward aborting pregnancies seem to have hardened, as President Erdoğan has increasingly described abortion as a murder and urged all women to give birth to at least three children.

The retirement age has been the subject of political strife since a populist government in 1991 radically lowered it. In 1999, Bülent Ecevit’s coalition government tried to raise the retirement age again, with stiff opposition from the unions, and in 2005 Erdoğan warned of growing underfunding of the social insurance system, which was also said to be complicated and ineffective. Yet in 2006, the average retirement age was only 47, which meant that most “pensioners” continued to work, with the pension as a tax-financed supplement to the salary. However, that year, with the support of the International Monetary Fund (IMF), a new social insurance law was adopted that established a gradual increase in retirement age until 2048. In 2014, the average retirement age was stated to vary between 58 and 65 years.

Polygamy is prohibited. However, men can circumvent the ban and marry a second wife with a purely religious marriage act, whereby marriage is not officially registered. A new family law in 2002 raised the lowest marriage age from 17 years for men and 15 for women to 18 years for both genders. However, with the permission of the parents, a person can get married at the age of 16. Civil law also allows a court to approve marriages even before the age of 16 in “extraordinary cases and for very special reasons,” which in most cases means that parents can force a young daughter to marry a man who raped her.

The Constitutional Court arose when it decided in 2016 to review a law on sexual abuse of children because it did not make a difference between whether an adult had sex with a 14-year-old or a 4-year-old. The court argued that if a 14-year-old girl voluntarily had sex with her 16-year-old boyfriend, it must be handled in a completely different way than if an adult abuses a small child. The decision was interpreted in many ways as allowing sex with children.

One expression of family cohesion in the Southeast is that they often marry within the family. In feudal villages, the chastity of women is seen as a measure of the “honor” of the family. With the relocation from the rural area in the south-east, so-called honor killings now also occur in major cities in western Turkey. There, girls from traditional families are exposed to special risks when they receive better schooling than their parents and more contact with modern life. Experts believe that hundreds of honor killings are committed annually, many of which are claimed to be accidents. In 2004, laws abolishing punitive relief for murder were abolished if the purpose was to protect the family’s honor. Subsequently, a sharp rise in the number of “suicides” was observed among young women in the Southeast.

In some parts of Turkey, mainly in the southeast, there is still blood revenge in connection with family feuds.

Homosexuality is not prohibited, unlike it is in some other countries in the Muslim world. The military, however, rejects homosexuals, but at the same time demands that recruits prove that they are “sick” to be exempt from military service. Same-sex marriage or partnership is not recognized.

In Istanbul there are then old gay bars, gay clubs and other meeting places for LGBTQ people. Gender change operations are allowed, and one of Turkey’s most popular entertainment artists, singer Bülent Ersoy, was, as the first name shows, from the beginning of male sex. Less well-known transgender people find it more difficult, excluded from the normal labor market and rarely end up in prostitution. Violence against homosexuals and LGBT people occurs.

Turkey is a host country for human trafficking, with many prostitutes from Russia, Ukraine and other countries of the former Soviet Union.

Through Turkey, the main routes for drug transport from Afghanistan, Iran and Southeast Asia go to Europe. Turkish customs and police are fighting drug trafficking in close cooperation with European and US authorities.

More serious houses are being razed in Istanbul’s 15-million-year-old city in recent years, testifying to overcrowding and black building, sometimes extensions on several floors that are not discovered or trampled by the authorities. The fact that the authorities in 2018 issued a temporary amnesty for, for example, extensions without building permits, which were subsequently approved by a “fast track”, has led to criticism from various directions.

Public expenditure on health care as a percentage of GDP: 4.1 percent (2015)

Dialogue with PKK is confirmed

A government spokesman confirms that the security service is having a dialogue with incarcerated PKK leader Abdullah Öcalan about getting the guerrillas to lay down their weapons.

NATO gives the go-ahead to deploy Patriot robots along Turkey’s border with Syria. The robots will protect Turkey from any Syrian regime attacks. NATO emphasizes that the deployment takes place solely for the purpose of defense.

The UN Human Rights Committee says that the anti-terror law of 1991 used by Turkey to arrest political activists, lawyers and journalists is so vague and unclear that it does not meet international law’s demands for legal security on several points.

Turkey receives harsh criticism in the EU’s annual report for major deficiencies in freedom of speech and assembly, long detention times and lengthy legal processes, as well as the continued absence of a political solution to the Kurdish issue.

Hundreds of soldiers are imprisoned

331 retired or active military men are sentenced to long prison sentences for involvement in “Operation Slaughter”, alleged plans to overthrow the government in 2003 by provoking a military coup (see January 2010). Three former generals are sentenced to 20 years in prison and several other high-ranking soldiers to 16-18 years. Most are sentenced to 13 years. Only 34 defendants are acquitted.

Army offensive against PKK in the southeast

According to the governor of the southeastern province of Hakkâri, the army has killed 75 members of the PKK during a week-long offensive in areas near the border with Iraq and Syria. Four army soldiers are said to have been killed.

Turkey is starting to import crude oil directly from the autonomous Kurdish region of northern Iraq. The Baghdad government describes trade as illegal and says it can damage relations between the countries.

In Istanbul, a lawsuit is launched against 205 people accused of membership in the Kurdistan Community Union (KCK), an umbrella organization that is considered to be banned from the PKK. Among the defendants is the well-known publicist Ragıp Zarakolu. The defendants risk long prison sentences for conspiring with terrorists.

The already tense relations with Syria are further deteriorated when a Turkish fighter plane is shot down by Syrian air defense. Turkey claims that the plane was in international airspace when it was shot down and receives strong diplomatic support from both NATO and the EU. Prime Minister Erdoğan describes the shootout as a hostile act and the Turkish army strengthens its surveillance of the border with Syria.

Kurdish politician Leyla Zana is sentenced to ten years in prison for expressing herself in a series of public speeches four years earlier in a way that the Diyarbakır court interpreted as failing to regard the PKK as a terrorist organization and recognizing the imprisoned PKK leader Abdullah Öcalan as Kurdish people’s leader. She had previously been convicted of the same statements, but that ruling was rejected by the Supreme Court of Appeal on the ground that she was not given sufficient opportunities to defend herself.

Try to speed up EU negotiations

In the middle of the month, Turkey and the EU make a formal attempt to revitalize Turkey’s accession to the Union. The negotiations have basically been down for a couple of years, but now Turkey and the European Commission will form eight working groups, each responsible for their specific chapter on the terms of entry. Through these groups, Turkey will receive active support for faster adaptation to the EU acquis. According to the EU, the working groups should be seen as a complement to the formal membership negotiations.

Attempts are made to write a new constitution

After six months of preparation, a parliamentary commission begins the concrete work of writing a new constitution, the first in the history of the Turkish republic which is not created by military directives. All four parties represented in Parliament participate in the process.

Former commander-in-chief General Ilker Başbuğ is facing trial for interference in an attempt to oust the AKP government.