The rapid urbanization in Zambia since independence in 1964 has created major problems in the cities in the form of unemployment, housing shortages and growing slums. At the same time, the countryside has lost important labor. In addition, the move to the cities has broken down the traditional social protection networks, which means that everyone in a family helps each other.

Although the World Bank classifies Zambia as a lower middle-income country, poverty is still widespread. More than half – 60 percent – of Zambians were considered poor, according to a 2010 census and according to the World Bank’s calculations in a report on poverty from 2015. The number of poor people has also increased as a result of population growth. In 2010, 7.9 million Zambians were considered poor, compared with 6 million in 1991.

Poverty is most widespread in rural areas, especially in households where women are responsible for their livelihoods. This is partly due to the fact that both modern and traditional legal rules discriminate against women. This applies mainly to legislation on marriage, divorce, maintenance and inheritance. 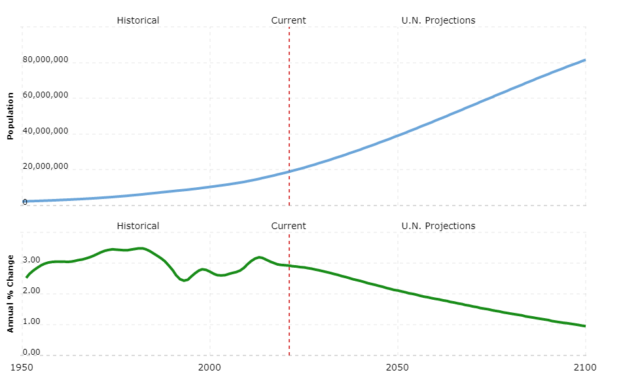 Access to food has increased in recent years, but it is still very uncertain as a result of recurring drought. More than half of the children under five are usually chronically malnourished.

More than half of the Zambian households have access to clean water at a reasonable distance.

The social protection networks, including pensions, include only the small group of Zambians who have a formal employment. Others are referring to the help their own family, relatives and friends can provide.

Zambia is severely affected by the HIV and AIDS epidemic. About one million residents were estimated to be HIV-infected in 2013, but the spread has slowed in recent years. Among Zambians aged 15 to 49, 13 percent were HIV-infected, according to the country’s Ministry of Health. The UN Children’s Fund Unicef ​​estimates that over 600,000 children lost one or both parents due to AIDS. HIV / AIDS-related illnesses are also a heavy expense for healthcare.

Malaria is also a common disease. A major effort to combat malaria was launched in 2006 and the campaign has been successful. Among other things, increased use of mosquito nets has reduced the number of deaths by half and the number of infected children by a quarter.

It is difficult for those who are ill to receive proper care. The country’s financial problems during the 1990s led to cuts in the already deficient healthcare sector. Clinics were closed and patient fees were introduced. Although the country’s improved economy in recent years has made it possible to build new hospitals and health centers, the lack of equipment, medicines and qualified personnel is still a major problem. The patient fees are reportedly now to be abolished for people in the countryside, but in practice, those who need care rarely get away without having to pay. For example, a patient may need to obtain the medical supplies needed to receive treatment.

It is becoming increasingly common for boys to be circumcised, partly because it is perceived as a hygienic measure and partly because it is assumed to reduce the risk of spreading HIV. Circumcision in connection with initiation rites for adulthood is traditionally done especially in the northwest. Circumcision also happens on a large scale at special clinics. About a fifth of the men were circumcised in 2013.

The position of women in society is generally weak. Women are discriminated against in terms of divorce, maintenance and inheritance. Traditionally, women do all the housework, take care of children and take care of many of the agricultural activities in the countryside. Violence against women is widespread. Child marriage is another problem.

As in many other African countries, homosexuality is prohibited by law. There are harsh outcomes against homosexuals from politicians, church leaders and local leaders. Same-sex couples have been persecuted.

Proportion of population with access to clean water: 61.2 percent (2015)

Proportion of the population having access to toilets: 26.4 percent (2017)

Chiluba is convicted of embezzlement from the Treasury

A British court finds President Chiluba and several other people guilty of having squandered a total of $ 46 million from Zambia’s Treasury to fund wasteful living. The case had been raised in court on the initiative of the Zambian Prosecutor who tried to trace large sums that the Zambian Ministry of Finance had sent to London. Chiluba and the other people are ordered to repay the money but the verdict is never obeyed.

A national campaign to demolish slums around the cities is set in motion but stopped when those who become homeless initiate legal proceedings against the state.

Several ministers may join because of corruption

President Mwanawasa dismisses several ministers, including his own son-in-law, for corruption.

President Mwanawasa continues the campaign against corruption that he initiated at his entry into power in 2002. Civil servants are warned and a police chief and two other persons are arrested for corruption.

Chinese President Hu Jintao visits the country and inaugurates a large mining investment zone. He refrained from a planned visit to the mining district in the north because of local protests against working conditions at a Chinese-owned mine.

The government is launching an economic plan aimed at encouraging foreign investment and improving the country’s health sector, school system and infrastructure.