Yemen is a strong patriarchal society. Women are usually regarded as inferior to men and referred to the home. Poverty and customer traditions play a big role in this, but Islamist politicians also work actively to uphold conservative values ​​and strict legislation. Several years of war have increased the number of child marriages.

The low status of women in society and within the family often causes them to be subjected to violence and sexual abuse, receive insufficient education and are prevented from moving freely. Many girls from poor families are given away in young years in exchange for money. In 1999, the age limit for when women can get married was abolished. Attempts to reintroduce an age limit ten years later were blocked by Islamists. Child marriage has attracted international criticism, since women’s organizations and the media reported that girls as young as eight are given away with men in their 50s and 60s. For many poor Yemeni households, marriage is a way to save the family’s finances by gifting the child into a richer family.

Multiple marriages are allowed for men, who can have up to four wives. Men may divorce without cause, but this right does not apply to women. In the event of a divorce, the husband also receives housing and custody of the children. 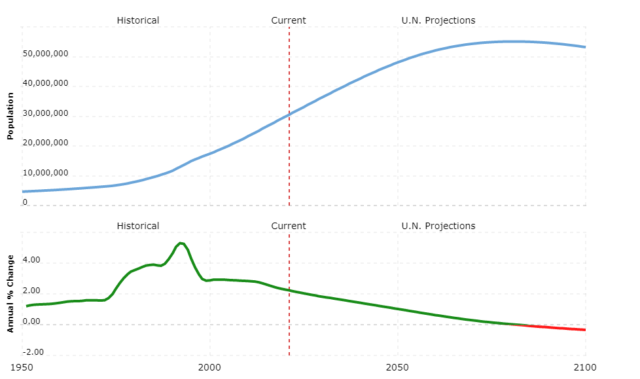 Women have the right to vote on the same terms as men, but in practice have limited political influence. In 2001, a woman was first elected as a minister, but in the 2003 elections only a single woman won a seat in parliament. When President Saleh was forced out of power in 2011, the UN made sure that women’s quota requirements came up for discussion. The result was that when Yemen inaugurated a so-called National Dialogue Conference in 2013, all participating political parties had accepted that 30 percent of their delegates would be women. The dialogue conference suggested, among other things, that genital mutilation should be banned and that 18 years should be the lowest permitted marriage age for both men and women. Instead, there was full war in Yemen, and this has led to the development going in the wrong direction. U.N:

The family size shrank for a couple of decades, as in the rest of the region. In 1990, according to the World Bank, every Yemeni woman gave birth between eight and nine children. Twenty years later, that figure had dropped to between four and five children. Data from the war years later are uncertain, especially since 2015.

Nutritional deficiencies and underweight in children were widespread problems even before the war. In 2009, there were three doctors per 10,000 residents. In the countryside, only one in four residents had access to health care. In principle, emergency care did not exist at all. Both maternal and child mortality had decreased by the end of the 1990s, but the numbers were still higher than in most countries. Malnutrition now exists on a very large scale, with a direct risk of starvation in many areas. In early 2019, the UN aid coordinator in the organization Ocha estimated that four-fifths of the country’s population needed relief. Nearly 15 million Yemenites were in urgent need of help (see Calendar).

Diarrhea and measles such as measles could be prevented with vaccine, but few Yemenis have care within reach and aid organizations have difficulty reaching out when war is raging (see Calendar). Households lack access to clean water. During the periods when it rains, and agriculture receives its much-needed rainfall, the spread of malaria is also extensive.

During the period 2007–2011, according to Unicef, more than 17 percent of the population lived on less than 1.25 US dollars a day. Already it was scarce and the situation has worsened dramatically by the war, partly because the price of food is being driven up in times of turmoil when food production is knocked out. The tradition of chewing qat has a direct link to malnutrition – the juice from the plant deafens hunger feelings – but qat in itself gives rise to health problems such as insomnia, constipation and apathy.

Proportion of population with access to clean water: 70.4 percent (2015)

Proportion of the population having access to toilets: 59.1 percent (2017)

Proportion of women in parliament: percent (2018)