The city of Williamsburg is located in the southeast of the US state Virginia, halfway between Richmond and Norfolk. From 1699 to 1776, Williamsburg was the capital of the oldest, richest and most populous North American colony in England. Named after William III, King of England, Williamsburg is one of the country’s oldest parishes. 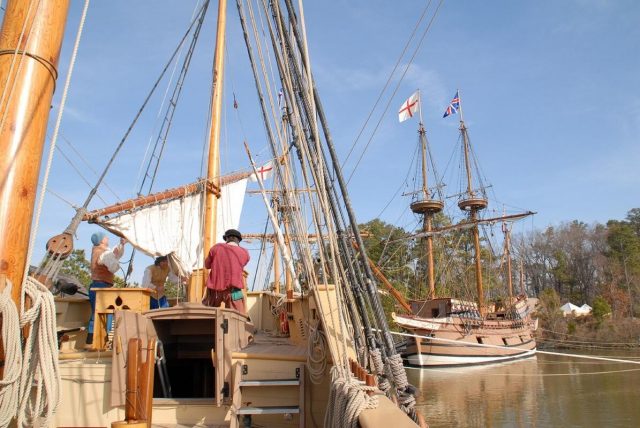 The story of the beginnings of the “New World”

The United States of America began in Jamestown when the first permanent English settlement was established there in 1607. The first legislative meeting in US history was held at Jamestown Church in 1619. The city remained the seat of government of the Royal British Colony of Virginia until it had to cede this function to the neighboring city of Williamsburg in 1699.

In 1776 Williamsburg became the capital of the new “Commonwealth of Virginia”, which was independent of the British Crown, as the US state is still officially called today, based on the British Empire. Twelve years later, in 1788, the seat of government changed again: Since then, the modern metropolis of Richmond has been Virginia’s capital.

Together with Yorktown, Jamestown and Williamsburg form the ” Historical Triangle “, which gives visitors an insight into the life of the settlers at the time with museums, original buildings and a huge open-air museum (“Colonial Williamsburg”). The best-known story from that time is certainly that of the Indian princess Pocahontas, who married the Englishman John Rolfe, a Jamestown settler, in 1614.

The “historic triangle” is a popular destination for excursions, especially with families. In addition to the historic sights, the region has a large theme park (Busch Gardens), outlet shopping opportunities such as the Williamsburg Premium Outlets, first-class golf courses and more. 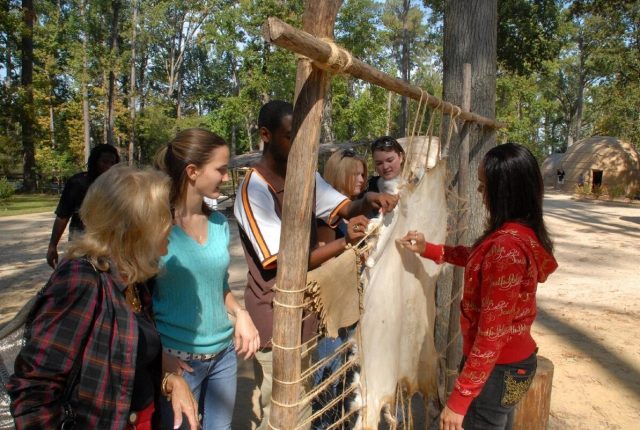 The “ Colonial Williamsburg ” open-air museum is also the historic city center of Williamsburg and is a listed building: the area measures around 120 hectares, includes hundreds of restored or reconstructed buildings from the 17th and 18th centuries and is closed to traffic. Taverns, goldsmiths and tool smiths, houses, printing shops and more can be visited and give insights into the life of an early colony at that time.

Interesting sights are the Governor’s Palace, the symbol of British authority in the colony, and the Capitol, seat of colonial power. It was here that on May 15, 1776, the independence of Virginia was voted.

It is one of the most famous and at the same time most tragic love stories in North America, the material for two Hollywood films and a Disney film adaptation: the story of the Indian princess Pocahontas . Chief Powhatan’s daughter really existed. She lived at the beginning of the 17th century when English settlers landed in what is now the US state of Virginia in 1607 and founded the first permanently settled English colony, Jamestown (initially: James Fort).

However, the love affair with John Smith, who ran the colony, is fictitious. Although Pocahontas often came to visit him and learn his language, she married the tobacco grower John Rolfe on April 5, 1614. Pocahontas is still a central figure in American history. On a guided tour of Historic Jamestowne you can learn about the details of the wedding with the English settler.

Historic Jamestowne is considered the original site of the James Fort American Heritage Site and is also known as the birthplace of the United States. It is located in what is now the city of Jamestown, where important artifacts from the settlers of the time have been found during excavations.

In the Nathalie P. and Alan M. Voorhees Archaearium , the museum of Historic Jamestowne, an exhibition shows the archaeological finds and details about the material world of the native people of Virginia and reveals their interaction with the English settlers.

Jamestown Settlement – history at your fingertips

In addition to the original location of the first permanent English colony in North America, visitors can experience the history of the Algonquin Indians and the white settlers in the Jamestown Settlement near the city: This complex consists of an interactive museum and an attached park with replicas of a Powhatan Indian village, the settlement and the three ships Susan Constant, Godspeed and Discovery, which brought the English across the James River to Jamestown.

Costumed museum employees vividly show what life was like at the beginning of the 17th century and how the culture and lifestyle of the local Indians differed from those of the white man. Jamestown Settlement is particularly popular with families, because both in the museum exhibition and on the outdoor area you can touch and try it yourself to your heart’s content.

In a recreated Indian village, visitors can also lend a hand and learn, for example, how skins were worked or canoes were made.

Jamestown is part of the Historical Triangle, which also includes Williamsburg, the capital of the British colony of Virginia from 1699 to 1776, and Yorktown, where the American-French army under George Washington decisively defeated the British in the American Revolutionary War in 1781.

All three locations are connected to each other via the approximately 40-kilometer Colonial Parkway holiday road . The Colonial Parkway connects the two parts of Jamestown and Yorktown of the Colonial National Historical Park with Colonial Williamsburg and offers a scenic drive through intact nature.

Williamsburg is also home to the two amusement parks, Busch Gardens® Williamsburg, with adventure and fun in a setting that is modeled on 17th century Europe, and Water Country USA® , a water park in the style of the 50s and 60s with water slides, pools, and play fun and live shows. 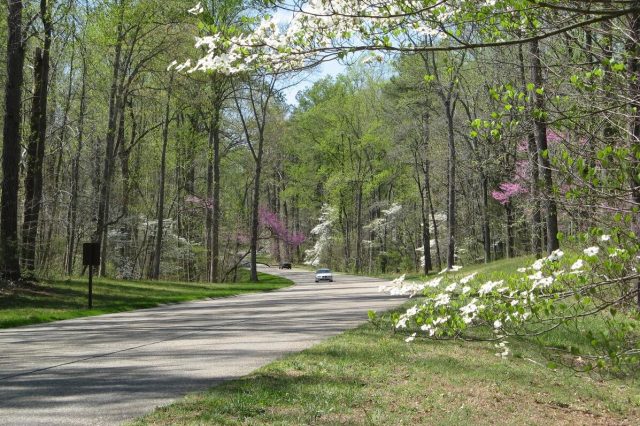