In terms of Gross Domestic Product (GDP) per inhabitant, United Arab citizens are among the richest in the Arab world, although not all seven emirates are equally rich. The income gaps are the largest in Abu Dhabi.

A citizen has access to a well-developed social protection network. There is also a social assistance system, including large cash grants, and thousands of families have received housing for free in Dubai and Abu Dhabi.

The country has a well-functioning healthcare system. However, the welfare has been criticized for being so generous that many young men neither take higher studies nor work seriously but primarily think of pleasure.

Women can hold high positions in the state administration and they make up a large proportion of university students. In practice, however, they still find it difficult to enter the labor market. 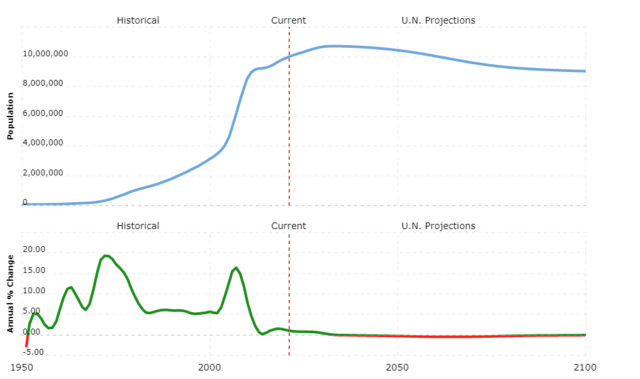 The emirate has received international criticism for the fact that children were used as riders in camel races and forced to live under slave-like conditions. Despite the ban on using children as a camel rider, it took until 2005 before the ban was banned. Many of the children came from Pakistan or Bangladesh and just over 1,100 children were returned to Bangladesh following the ban. In 2009, media reported that 879 children had received damages. Some of the children sustained permanent injuries.

Proportion of the population having access to toilets: 98.6 percent (2017)

Public expenditure on health care as a percentage of GDP: 3.5 percent (2015)

Leaders are absent from GCC summit

Hopes for a solution to the conflict within the GCC come to shame when everyone except the host country of Kuwait and Qatar is represented at a lower level at the regional cooperation organization summit in Kuwait. The meeting ends prematurely and is overshadowed by Saudi Arabia and the United Arab Emirates declaring that they intend to form a new organization to strengthen their military, political, economic, trade and cultural cooperation.

The London-based Arab Human Rights Organization (AOHR) calls on the International Criminal Court (ICC) to investigate allegations of war crimes in Yemen to which the United Arab Emirates is guilty. The AOHR states that banned cluster bombs have been used and that mercenaries are guilty of torture and extrajudicial executions. Neither Yemen nor the Arab Emirates are members of the ICC, but because mercenaries with other nationalities are involved, the court can open an investigation. According to AOHR, these are mercenaries from Colombia, Panama, El Salvador, South Africa and Australia. Human Rights Watch has previously accused the Arab Emirates of setting up at least two informal detention camps in Yemen and of transferring detainees to a base in Eritrea.

The Abu Dhabi Louvre is inaugurated

French President Emmanuel Macron is on site at the inauguration of the Louvre in Abu Dhabi, a subsidiary of the famous Paris Art Museum. The new museum has 600 of its own works and 300 that have been lent by France, for a great deal of compensation. The agreement was concluded in 2007 and the construction would have been completed in 2012, but was delayed. The building has cost a billion dollars.

The President appears in public

For the first time in just over three years, President Khalifa is publicly visible, in connection with the party at the end of the fixed month, id al-fitr. Khalifa suffered a stroke in January 2014.

Relations with Qatar are broken

As the United Arab Emirates, the United Arab Emirates makes Saudi Arabia and Bahrain, Egypt and Yemen, and breaks diplomatic relations with Qatar. Qatar is accused of supporting IS and al-Qaeda and in the background there is Saudi dissatisfaction with Qatar’s support for the Muslim Brotherhood, al-Jazira and Iran. All land relations with Qatar are closed, Qatari plan is banned in neighboring countries’ airspace, Qatari citizens are ordered out and neighboring citizens are ordered to leave Qatar.

Leading academic Nasser bin Ghaith is sentenced to ten years in prison for tweeting false information about the country’s leaders and their politics. The reason is that he wrote that he did not receive a fair trial as one of the UAE 5 (see April 2011). Amnesty International calls Nasser bin Ghaith a prisoner of conscience on the occasion of the new verdict.

Human rights activist Ahmed Mansoor is arrested on suspicion of inciting and disseminating “false information”. He is said to have been taken away since twelve people stormed and searched his home in the middle of the night. The arrest is criticized by the UN. Mansoor, who in 2015 was awarded the prestigious Martin Ennals Prize for his work for human rights, was one of the “UAE Five” – ​​the five in the United Arab Emirates – who were arrested in 2011 for insulting leading people in the country (see April 2011).