Everyday life in Uganda differs greatly between city and countryside. In the big cities, many live the same everyday life as in richer countries in terms of family structure, leisure and working life. In rural areas, family structures are more traditional with several generations living together.

Just under a fifth of Ugandans lived in 2012/2013 at less than $ 1.25 a day, compared with just over half 20 years earlier. Poverty is most prevalent in rural areas. Particularly significant changes have taken place in northern Uganda, where the calm of recent years after the LRA guerrillas (see Political system and Modern history) have been driven out of the country, together with increased aid efforts have led to increased agricultural production. There is a debate about whether the official statistics are correct, since a large part of the population still has difficulty getting the economy together.

Only about one in four Ugandans have a traditional bank account. From 2009, however, it has become more common for Ugandans to pay bills or transfer money via their mobile phones, often just by sending a text message. In 2014, almost half the population was estimated to own a mobile phone. Local agents for telecommunications operators are located throughout the country, even in rural villages. 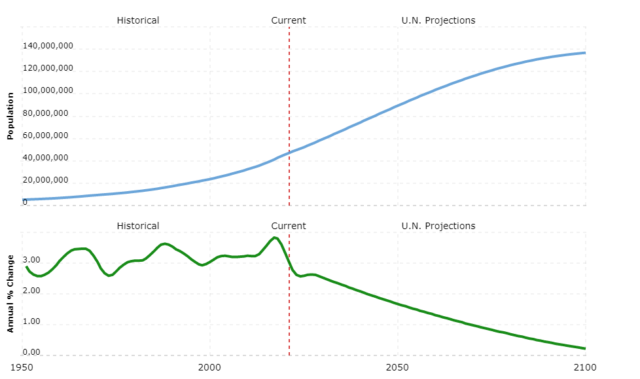 Women hold high positions in politics and administration and just under a third of MPs (mainly due to special reserved mandates) and an almost equal proportion of government members are women. In recent years, the proportion of girls attending school has increased. However, women earn less than men (the figures on how large the differences are between 30 and 60 percent). In more qualified professions, the pay gap is smaller.

To enter into marriage you have to be over 18, but many girls who get married are younger than that, especially in rural areas, where some may be as young as 12 years. Polygamy is allowed.

The position of women in society is better than in neighboring countries. Women hold high positions in politics and administration and just under a third of MPs (mainly due to special reserved mandates) and an almost equal proportion of government members are women.

In recent years, the proportion of girls attending school has increased. However, feminists in Uganda point out that women are far from having an influence that corresponds to their contribution to production, especially in agriculture. Women earn less than men (the figures on how big the differences are between 30 and 60 percent). In more qualified professions, the pay gap is smaller.

To enter into marriage you have to be over 18, but many girls who get married are younger than that, especially in rural areas, where some may be as young as 12 years. Polygamy is allowed.

However, according to a report on world equality in the World Economic Forum from autumn 2014, Uganda had slipped down 42 places in the ranking, from place 46 in 2013 to 88 in 2014. Important reasons for this were, among other things, that significantly fewer women than men can read and write and women, on average, earned 60 percent less than men.

Genital mutilation of women occurs only among a few people in the eastern part of the country. It was banned by law in 2010 and active educational work is ongoing for it to cease completely.

Although President Museveni, since taking power in 1986, has spoken of wanting to fight the disparate impact of the peoples ‘groups on the country, it still matters a lot to which peoples’ group they belong. Accusations that people with power favor their own group often occur.

Homosexuality is prohibited by law, and can provide imprisonment for up to 14 years. It attracted considerable attention, not least abroad, when a member of the ruling party in 2009 proposed that legislation be tightened so that sex with a person of the same sex would give life imprisonment or even the death penalty if sexual partners were disabled, children under 18 or if you are HIV positive. It would also be a criminal offense to plead for a “gay lifestyle”. This occurred even before arbitrary arrests of people who were also subjected to torture or ill treatment because of their sexual orientation, according to Amnesty International. In the fall of 2010, several people identified as gay were harassed by a new Ugandan newspaper, Rolling Stone. A judge eventually banned the newspaper from publishing names of gay Ugandans. Sexual Minorities Uganda (Smug) that had been on the newspaper’s list. In 2014, another tabloid magazine publishes a list of 200 Ugandans identified as gay.

The law that was finally adopted in 2013 contained harsh punishment against homosexuals, but now life imprisonment was the highest sentence that could be sentenced. However, the law was annulled by the Constitutional Court the following year (see Current policy).

The social protection network in Uganda is weak. As in many developing countries, the immediate family provides assistance to the sick or old.

Access to healthcare is poor in rural areas. Medical facilities are mainly found in the larger cities and the lack of doctors, dentists and nurses is great. Voluntary organizations account for a large part of the public health care in the country.

In the religiously conservative Uganda, few use contraceptives. About one fifth of women have access to modern contraceptives. It is particularly difficult to obtain information about family planning for those living in rural areas, where it is often far to health clinics. Maternal mortality is high, in 2013 438 women died per 100,000 births.

People with disabilities are discriminated against, both in the labor market and in education. However, five seats in the National Assembly are reserved for disabled Ugandans.

Uganda is one of the worst AIDS-afflicted countries in the world. But it was also the first country in Africa to successfully fight the epidemic. Since at least 20 percent of adults were estimated to be infected by the HIV virus in 1992, the proportion of infected adults was down below 6 percent in 2000. A large part of the success was due to information campaigns that changed sexual habits, and that brake medications became cheaper and thus more accessible. In recent years, according to the UN agency Unaids, the proportion of infected Ugandans has increased to just over 7 percent. According to Ugandan authorities, the share had fallen to 6 percent of all persons aged 15 to 49 in 2016.

In 2014, a law on mandatory HIV tests was passed by pregnant women and their partners, and it was also a crime to deliberately spread the disease.

Many of the victims of the conflict with the LRA have not received the help they need to enter society. This applies not only to former child soldiers, but also to women who were kidnapped and the children they gave birth in captivity, as well as children born after rape (which not only the LRA but also the government army and other armed groups committed). The programs to reintegrate people have been primarily focused on supporting former rebels, according to a report by the International Center for Transitional Justice (ICTJ).

Trafficking in human beings is a problem. Both men, women and children, some as young as seven years old, are used for forced labor in, among others, agriculture, the mining industry, in restaurants and in homes, but also prostitution. A large proportion of the victims come from Congo-Kinshasa, South Sudan and Rwanda. Ugandans are also used in similar ways in neighboring countries. The law prohibits Ugandans from traveling to the Gulf states and other parts of Asia to work as domestic servants, precisely because of the risk of being ill-treated and forced into prostitution, but the law is bypassed many times. The Ugandan state’s efforts to combat human trafficking are far from sufficient. Only two people were convicted of such crimes in 2013.

In 2016, smoking bans were introduced in public places. Anyone who violates the ban risks a fine of the equivalent of $ 60 or two months in prison.

Proportion of population with access to clean water: 38.9 percent (2015)

Proportion of the population having access to toilets: 18.5 percent (2017)

Public expenditure on health care as a percentage of GDP: 7.3 percent (2015)

The ICC does not intend to prosecute

In November, the ICC makes a clear indication that the court does not intend to lay charges against the LRA leaders, even if the guerrilla manages to reach a negotiated solution with the government.

One of the five prosecuted LRA leaders, Vincent Otti is executed, on direct order by Joseph Kony. Otti and Kony must have disagreed about the peace talks. Otti is considered to have driven to seek a negotiated solution.

The peace talks are partly clear

In July, the parties to the peace talks between the government and the LRA announced that three out of five parts of the Juba negotiations are ready.

The government’s plans to allow a sugar company, the Mehta Group, a partially Indian-owned company, to grow up a third of the Mabira forest reserve in Buganda on Lake Victoria provokes protests from environmental groups and others. A protest march in April leads to violence that requires at least three deaths. The Buganda king offers the company another forest land to save Mabira. Environmental groups claim that the forest is needed to prevent soil erosion and to preserve rare bird species. The government, which is divided on this issue, gives the 2010 Mehta group permission to start growing sugar cane for biofuel production. The conflicts fuel anti-Asian sentiment.