Togo is a poor country also measured by African dimensions. In terms of GDP per person, Togo belongs to the poorest quarter of Africa’s countries. More than half of Togolese live in poverty, according to the African Development Bank.

The vast majority of Togolese have only the social protection network provided by the traditional extended family and the village community. For workers in the official sector, there is a certain social protection, including accident, disability and maternity benefits.

Health care is suffering from a lack of equipment and medicines and the allocation that the state invests in healthcare is unevenly distributed. The shortage of trained staff is great. There is a doctor of 10,000 residents. 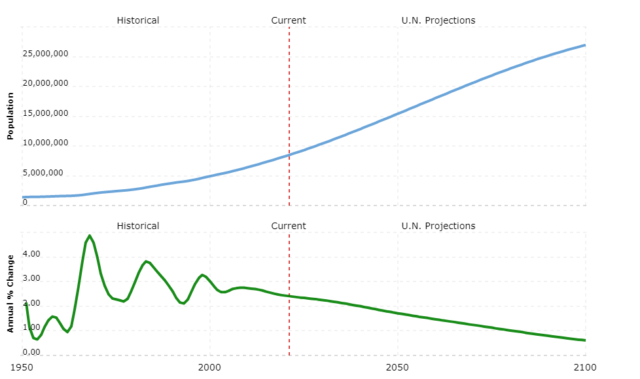 Common diseases that often lead to death in Togo are malaria, tuberculosis, measles, meningitis and amoeba infections. At the end of the 2010s, 73 children of 1,000 died before the age of five.

The hygienic conditions are bad in many places; just over one in three Togolese still lack access to clean water and fewer than a fifth of the population have sanitation facilities.

Violence against women is common in Togo, especially in the homes. Women are also discriminated against in various ways, even though the Constitution prohibits discrimination on grounds of gender. Among other things, under traditional laws, women have no inheritance right at the death of their spouse and no right to maintenance at divorce.

Women’s representation in the state sector, in parliament and in political parties is low. But after a constitutional change in 2013, the political parties’ lists of candidates for the elections must consist of an equal number of women and men.

The proportion of women who have been subjected to genital mutilation, which is prohibited by law since 1998, has decreased from 12 percent in 1996 to 2 percent at the end of the 2010s.

Crime is high. The trade in weapons, drugs and people is extensive, as is the laundering of black money. Togo is notorious for its extensive trade in children, also as a transit country to other countries. In the past, people dealing with children could avoid punishment, but since 2005 both those who organize the trade and those who exploit children can be sentenced to prison.

Proportion of population with access to clean water: 62.8 percent (2015)

Proportion of the population having access to toilets: 16.1 percent (2017)

Public expenditure on health care as a percentage of GDP: 6.6 percent (2015)

The death penalty is abolished

Parliament voted unanimously for a bill that would abolish the death penalty and convert existing death sentences into life imprisonment; The last execution in Togo was executed in 1978.

The president’s brother is arrested for coup attempt

On Easter Day, a fire erupts around a house where President Faure Gnassingbe’s half-brother Kpatcha lives. At least two soldiers are killed when security forces fight with soldiers loyal to the brother. He is an influential member of parliament and of the RPT party and he was Minister of Defense in 2005-2007. Kpatcha is accused of preparing a coup, which he denies. He is placed under house arrest but is arrested after unsuccessfully seeking asylum at the US embassy.