A lot has improved for the people of Tajikistan since the civil war of the 1990s in many respects brought the country to the same level as a developing country. Poverty has decreased significantly and significantly more people have access to clean water and functioning sewers. Yet the country is faced with major social problems, such as undeveloped health care and high crime rates.

In 1999, 82 percent of residents lived below the national poverty level; two decades later, this is just over 29 percent. Extreme poverty decreased from 54 percent in 1999 to 4.8 percent in 2015, according to the World Bank.

At the same time, many Tajiks still find it difficult to get food. According to the UN agency WFP, between 1 million and 1.8 million residents of a population of 8.9 million have insecure access to food. Portions of the population depend on food and supplies from UN agencies and other donors. 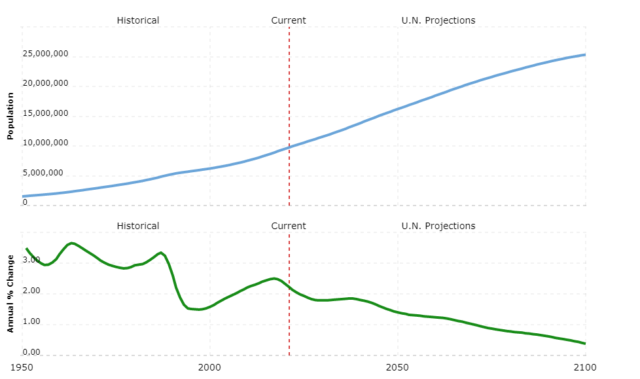 One in four residents lack access to clean water, while almost all now have access to proper toilets and drains according to official statistics.

Healthcare is deficient, especially in rural areas. Diseases such as tuberculosis, malaria, typhoid, cholera and diphtheria are common. Mortality among children under five is the second highest among the countries of the former Eastern bloc (the former Soviet Union and Eastern Europe). Together with the World Bank, the government is investing in vaccination programs for children under five, treatment of high blood pressure and special efforts for pregnant women and infants.

The crime is high, mainly because Tajikistan is a transit country for drug smuggling from Afghanistan. Drug abuse also occurs.

Trafficking in people, so-called trafficking, is a major problem where Tajikistan is both a transit country and a country of origin for prostitution. Child labor is common, especially in cotton cultivation.

Social insurance consists mainly of pension schemes and assistance programs that are not very effective in reducing poverty.

The Tajiks, like other historically settled peoples in Central Asia, are not divided into tribes, although the cohesion within the genus – or clan – is strong. People often identify with the region they live in rather than with the nation.

The big family is a basic social unit. A large family usually consists of a couple and their unmarried daughters as well as married sons and their wives and children. Such a family unit often has joint responsibility for houses, land and livestock. Previously, a well-off large family could consist of at least 50 people. Nowadays, families are usually smaller, but it is common for three generations to live together. The youngest son is expected to live with his parents even when he forms his own family.

Marriages are often arranged through agents, sometimes even when the intended spouses are infants. The man traditionally pays a high bride price at marriage. Above all, women are occasionally given away even in their younger teens, even though the law doesn’t really allow it. Polygamy is also officially banned but has become increasingly common in recent years. One reason for this is that religion has become increasingly important after the Soviet era (1920-1991), and according to Islam, one man has four wives. Another is the great shortage of men in Tajikistan, which is because many men leave abroad to look for work.

The woman’s situation is difficult. There are laws that guarantee women’s rights, but they are poorly followed. Women are subjected to discrimination and violence, and are particularly affected by poverty. In the cities there are women who have participated in all aspects of society since the Soviet era. In the countryside, on the other hand, it is common for the man not to allow the woman to study or work outside the home.

Some women are subjected to violence and abuse, not only by their spouse but also by their family. The man may be working abroad and the woman will stay with his family in a remote village, under tight conditions. It seems that women become so desperate that they set fire to themselves. According to some reports, several hundred women a year try to kill themselves in this way. The dark figure is assumed to be large. Often, burns are reported to have been caused by accidents when cooking over an open fire.

In many cases, her husband soon disappears to work abroad, and the wife becomes the closest servant of his family. In many parts of the countryside there are almost no men left. Many women, especially the young, in practice become widows. It is not uncommon for men to form a new family in another place.

Infants are considered susceptible to infections and do not show up until 40 days after birth, when celebrations can be held. Many children are raised in the home. Tradition does not attach much importance to formal education, the duty towards the family is more important.

Homosexuality is not prohibited by law, but socially it is not accepted.

Proportion of population with access to clean water: 74.1 percent (2015)

Proportion of the population having access to toilets: 97.0 percent (2017)

Opposition leader Mahmadruzi Iskandarov (see April 2005) is sentenced to 23 years in prison for terrorism and corruption.

Russian forces complete their retreat from the border with Afghanistan and Tajik forces take over.

Opposition leaders are kidnapped in Russia

Opposition leader Mahmadruzi Iskandarov is released in Moscow after a Tajik request for extradition was rejected. Iskandarov is later kidnapped and arrested in Tajikistan.

Criticism of the presidential grand victory

The People’s Democratic Party wins a new landslide victory in the parliamentary elections. According to international analysts, the election is not democratic.