The standard of living in Taiwan is comparable to that in Western countries. The population is one of the most prosperous in Asia. The health problems are also increasingly the same as in the West, such as obesity and cardiovascular disease.

The general state social insurance systems are poorly developed, but in 1995 a general health insurance scheme was introduced covering the entire population. The care is of a high standard. Both Western and traditional Chinese medicine are used.

In 2012, a special childcare grant was introduced to encourage increased childbirth (see Population and Languages). 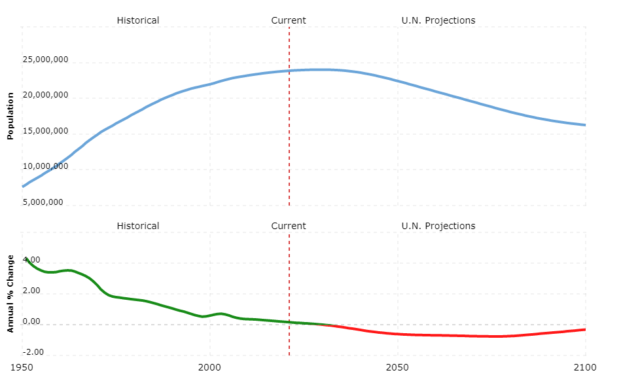 Traditionally, the family has taken care of the elderly; it was unthinkable to let old people live alone. Older people, in turn, often contributed with household chores and childcare. But with the entrance of modern society and increasingly smaller family units, more and more old people now live alone, without the help of the family.

Previously, there was a clear link between ethnic belonging and social class in Taiwan. Most of the residents are ethnic Chinese, but there were strong contradictions between groups that have long been in the country (Taiwanese) and new arrivals (mainland Chinese). The mainland Chinese dominated in politics and administration, and belonged to the higher strata of society. But the contradictions have diminished considerably through a general “Taiwanization” of society. In addition, the large economic promise means that an increasing proportion of the population belongs to a prosperous middle class.

Indigenous peoples are still over-represented among the least privileged, with greater poverty and other social difficulties. They largely live in villages and smaller communities in the mountainous eastern parts of Taiwan. In recent decades, the indigenous peoples have been strengthened in their identity and joined together, despite the fact that they are different, to fight for rights to areas such as land. Only in the 1990s did they get the right to use non-Chinese names in public documents.

Traditionally, Taiwanese society is strongly family oriented and patriarchal. Basically, there is a Confucian ethic that emphasizes the importance of honoring parents, ancestors and superiors. The sense of duty and loyalty are words of honor; great emphasis is placed on education and work. The collective is superior to the individual, a Taiwanese is expected to subordinate their own needs and feelings for the best of the group.

Both individuals and groups fall under the central concept of “face” – which is about reputation, dignity and prestige. With modern Swedish, you can call it avoidance as something that is “shameful”. For many Taiwanese, this is more important than something that can be bought for money. You want to avoid losing your face at all costs and, if necessary, have to act to save your face. If a counterparty is in some way embarrassed or humiliated in public, it is important to do what you can to remedy: apologize, take on the blame, divert attention, et cetera.

The most important collective is the family or the family. The family may also include ancestors. Together with gods and spirits, they are happy to have a cup of tea or wine served on the family altar. Family names tie together people. From the outset, it was not necessarily blood ties, but could include people from one and the same area.

The ideal family consists of several generations: parents, married sons and their families, unmarried children. Traditionally, the large family accounts for a large part of financial transactions and social services – you own land, have business and savings, take care of children, the elderly and the sick. It is still common for at least the oldest son and his family to live with their grandparents. However, the family’s role as a business unit has been eroded and households are becoming smaller. The nuclear family of the Western cut is no longer uncommon. Marriage is generally concluded by love and not as a business settlement between parents, although their blessing is still important.

Modern society has also brought with it that individuality is gaining an increasing role and social adaptation is not the only yardstick. The woman’s role has also been significantly strengthened – through education and high participation in working life, she has a different position than before when she almost became a property in the husband’s family at marriage. Since the 1990s, daughters also have the same inheritance rights as sons, although they often relinquish their right, especially in connection with marriage. This applies not least to land ownership. Formally, equal pay applies to equal work, but in reality women earn significantly less than men.

The woman also has the greatest responsibility for the home. The mother takes care of the young children, who can also be cared for by older siblings. Children are expected to be obedient, quiet, and helpful. Threats and bark occur, but rarely discipline. The press is hard on schoolchildren to do well; very many take extra lessons outside of school hours.

Homosexuality is not prohibited, but discrimination is also not prohibited by law and intolerance is great. In the traditional family ideal there is no place for homosexuals. In May 2017, the Constitutional Court ruled in a ruling that legislation giving same-sex couples the right to marry should be introduced and that this must be done within a two-year period. A year later, in the fall of 2018, referendums showed that there was little popular support for same-sex couples to have as much right to marry as heterosexual couples.

Triumph of the Democratic Progress Party

Chen Shui-bian and his wife are sentenced to life imprisonment. One son and one wife and several co-accused were given shorter sentences.

The Prime Minister is leaving after typhoon

The typhoon Morakot hits the country hard. At least 600 people die in connection with floods and landslides. Prime Minister Liu Chao-Shiuan resigns in September because of criticism of the government’s inadequate efforts in connection with the disaster. He is succeeded by Kuomintang’s Secretary-General and Vice President Wu Den-yih.

New cooperation agreements are signed with China. China announces that it no longer opposes Taiwan’s participation in World Health Organization (WHO) meetings. Taiwan opens up for investment from the mainland.

The trial of Shui-bian begins

The trial of former president Chen Shui-bian begins. Che Shui-bian, who began a hunger strike in prison in February of that year, is accused of, among other things, fraud and bribery.