The war-ravaged South Sudan is one of the world’s poorest countries, almost entirely in the absence of functioning infrastructure and community service. People may rely on cultivation and livestock care for their own use or on food aid for their survival. The worst is for the millions of people who are on the run from each other’s quarrels.

From the conclusion of a peace agreement between North and South Sudan in 2005 to mid-2009, 2.2 million South Sudanese returned to a homeland that had little or no opportunity to receive them. During the first three months the returnees received money for food from the UN. But the infrastructure in the form of schools, hospitals, roads and so on that would have been needed was missing.

Seven years later, in 2016, a brutal civil war between the government army and rebel forces had driven nearly four million people into flight, mainly within the country but also abroad. The people who remained in the country lived in extremely difficult conditions. Entire communities were devastated, agriculture had collapsed and food shortages were widespread. 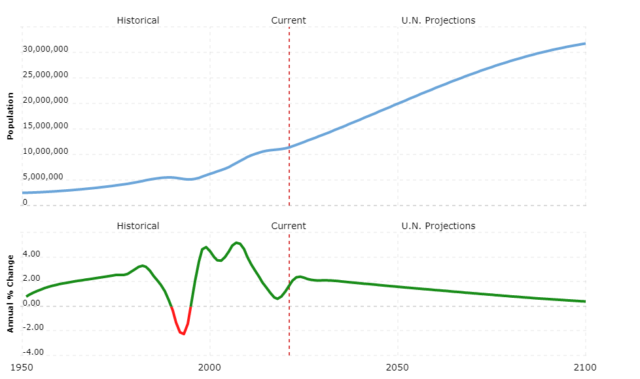 Every third resident on the run

Despite peace agreements in 2015 and 2018, sporadic fighting is still being fought between the government army and resistance groups that have chosen to stand outside the peace agreements. In addition to the violence, the farmers are also prevented by landmines from cultivating their land. The land mines are hidden under fields, pastures and roads. Already during the war against northern Sudan (1983–2005), mines were deployed both by government troops and by rebels. In addition, livestock feeds and other local petty wars have driven more people into flight in recent years.

Since the outbreak of the civil war in 2013, some 382,000 people have been killed in fighting or by starvation. Estimates state that there are nearly two million internal refugees in South Sudan and that around 2.3 million South Sudanese are on the run in other countries in the region. This means that about every third citizen lives as a refugee. Around seven million people have insecure access to food.

In the wake of the war a number of serious illnesses have followed, of which malaria, yellow fever, measles, river blindness, insomnia and polio are some. Gastrointestinal diseases such as cholera are spread when the hygienic and sanitary conditions are poor.

In the capital Juba, all water and wastewater pipes were destroyed already in the 1960s, during the first war against northern Sudan. Some of the city’s drinking water is now collected from the Nile and distributed in tankers. In the Nile, Juba’s residents also dispose of their waste. Almost half of the country’s residents have access to clean water and only a tenth have access to functioning sewers.

There is a screaming shortage of healthcare staff and hospital beds. The medical care that is available is mainly offered by foreign aid organizations.

The cases of HIV and AIDS were long in number, but after 2005 increased spread was reported. The end of the war meant that the soldiers in the South’s army were given leisure time and regular payment and thus opportunities to buy sex and alcohol. At the same time, prostitutes from Kenya and Uganda, where the disease is more prevalent, came to Juba. In 2018, 2.5 percent of the adult population had HIV / AIDS.

The situation of women and children

Arranged marriages are common, and many girls have children at a very young age. Most women are sexually abused. The most radical form, the pharaonic circumcision, is widespread. The proportion of women who die in any form of childbirth complications is among the highest in the world.

Rape is a widespread problem and few perpetrators are punished. Rape has also been used systematically as part of the war. Children are constantly at high risk of being forced into militias or subjected to sexual abuse. It seems that children prostitute themselves to get money for their survival.

An old phenomenon brought to life by the civil war between northern and southern Sudan was slavery. After Islamists in Khartoum in the late 1980s declared war in the south for jihad, holy war, Arab militiamen, Murahalin, began to bring home black prisoners of war. Most women and children were captured.

According to the constitution, women should be entitled to equal pay as men for the same kind of work. In government and public companies, at least 25 percent of the services should go to women. Likewise, at least every fourth minister in the government should be a woman.

The rights of LGBT people

Discrimination on the basis of sexual orientation or gender identity is common and there are reports of harassment and abuse of LGBTQ persons. There are cases where the security police have arrested and abused LGBTQ persons. The law does not explicitly prohibit same-sex sex, but “unnatural phenomena” are prohibited. “Sexual intercourse against the order of nature” can give ten years in prison if there is consent and 14 years in prison if done against someone’s will. There are no registered organizations working for the rights of LGBT people.

Proportion of population with access to clean water: 50.4 percent (2015)

Proportion of the population having access to toilets: 11.3 percent (2017)

Public expenditure on health care as a percentage of GDP: 2.5 percent (2015)

The South’s representatives end the boycott of the federal government in Khartoum.

The South Sudanese Party SPLM temporarily leaves Khartoum government cooperation on the grounds that the north side does not live up to the peace agreement.