According to the United Nations Development Agency, UNDP, 73 percent of residents lived on less than $ 1.25 a day in 2012. Rural conditions are particularly difficult. In Somaliland and Puntland, living conditions are considered to be somewhat better than in the rest of the country.

Almost all care is funded through voluntary organizations or Somalis living abroad. Many children die from diarrheal diseases, malaria and respiratory tract infections. Diseases such as measles, cholera and tuberculosis are also common.

In 2017, in collaboration with the World Health Organization WHO, vaccination campaigns against measles and cholera were initiated. About 15,000 suspected cases of measles were reported between January and August 2017. 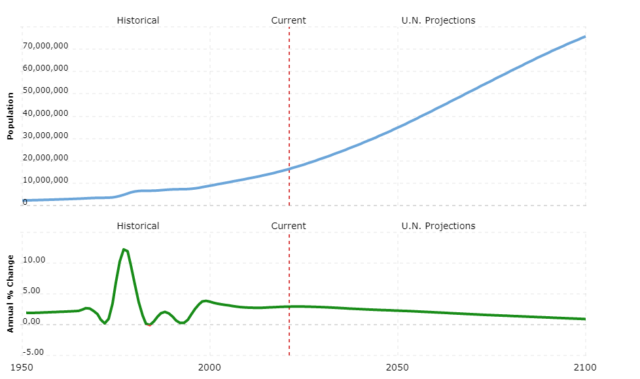 To be eligible for education and other community service, a child must be registered. Despite this, only a few percent of all births are recorded.

The starvation disaster 2010–2012 was evident in the statistics. In 2012, it was estimated that 147 children out of a thousand died before the age of five, compared with 109 three years earlier. Nearly one child in ten dies before the age of one.

As a result of the civil war in Somalia, perhaps three quarters of the population have left their settlements at least once (see also Population and Languages). Most have returned later, or at least found somewhere to settle down, but some have remained in collection camps. The camp refugees are often people who are outside the clan system (like somali bantu) or who belong to clans without strong militias. In 2018, the UN estimated that there were about 2.6 million internally displaced people in the country (see Population and Languages).

Women are discriminated against in a number of areas and have little political influence. According to the Provisional Constitution, 30 percent of the seats in Parliament are to go to women. In the indirect election held in 2016/2017, the share was 24 percent in both chambers of parliament, which was still 10 percent more than 2012.

Women are also discriminated against in inheritance laws, since daughters inherit only half as much as sons.

Trafficking in children and women is common. Girls are given away early, especially in rural areas, where some may be as young as twelve. In areas controlled by al-Shabaab, it appears that young girls are being forced to marry combatants.

Almost all women in Somalia and Somaliland are sexually abused. Until 1991, genital mutilation was prohibited, but nonetheless occurred. A new ban was introduced in the Provisional Constitution adopted in 2012.

The maternal mortality rate is high, 850 per 100,000 births. Female genital mutilation is considered to be one of the causes of so many serious infections and bleeding in connection with childbirth. About a percent of women are estimated to have access to modern contraceptives.

The war has also turned many women into widows, which has led to more women than ever before starting to work in order to support themselves. Among other things, half of the merchants at the large Bakara market in Mogadishu are women.

Rape is a problem, especially vulnerable women and children who live in the refugee camps or belong to the minority people.

Human trafficking is a problem. Somali men, women and children are smuggled to Djibouti, Kenya, Ethiopia and the Persian Gulf countries, for example, for sexual exploitation or forced labor.

In the lawless state that the country has been in since the early 1990s, crime, high and kidnappings and violent crimes are common. Somaliland and Puntland have been comparatively calm, but security has also deteriorated in recent years.

Consumption of the mild narcotic plant khat (qat) increased sharply during the war. In 2006, when several Islamic courts banned the use of the drug in their areas, it led to unrest. Al-Shabaab has also banned all use of khat.

Proportion of population with access to clean water: 40.0 percent (2015)

Proportion of the population having access to toilets: 38.3 percent (2017)

Many of the roads built in the 1960s and 1970s have not been maintained and are in poor condition today. In Somaliland some of the road network has been refurbished in recent years, especially in Hargeisa there are quite good roads. Transport within the country is mainly by bus or trucks.

Roadblocks set up by government forces, clan militia and al-Shabaab where travelers are often demanded for money or threatened with violence make it both expensive and dangerous to travel between different parts of Somalia..

In 2006, traffic resumed at Mogadishu International Airport, which had been down for ten years. In 2012, Turkish Airlines began flying from Istanbul to Mogadishu twice a week. It was the first international flight to land in Mogadishu in many years.

The largest ports include Mogadishu, Kismayo and Merca. In the north, Berbera in Somaliland and Bossasso in Puntland are the most important ports.

Medical students and several ministers are killed in terror attacks

At least 22 people are killed, including three ministers, in a suicide attack against a hotel in Mogadishu. Among the victims are two journalists, but most were medical students who gathered for a degree reception. al-Shabaab is suspected of the act, but denies any involvement. A few days later, hundreds of people protest to protest against al-Shabaab.

Islamists threaten with revenge in Uganda and Burundi

al-Shabaab attacks Mogadishu airport. The fire is answered with grenade fire from the AU forces. At least 20 civilians are killed. The Islamist militia threatens to be avenged by terrorist attacks in Uganda and Burundi.

About 20 people, including four assailants, are killed shortly afterwards by two suicide attacks against the AU forces’ location in Mogadishu.

In the middle of the month, US special forces carry out a helicopter attack on Barawe, south of Mogadishu, and say four men, including a suspected Islamist leader, a Yemeni-born Kenya, Saleh Ali Nabhan, have been killed. Nabhan is charged with involvement in terrorist attacks in Kenya in 1998 and 2002.

At least 30 dead in suicide

A suicide attack in the Hiraan region requires at least 30 lives, including the death of the security minister.

Grassroots movement intervenes on the government side

The grassroots movement Ahlu Sunna Waljamaca is taking up arms to defend the transitional government against militant Islamists. This has happened since the latter have destroyed the tombs of Sufic leaders. After that, new fierce battles erupt in the middle part of the country.

The battles are escalating

The violence is escalating further and from May 8 to May 25, about 60,000 people are estimated to have fled Mogadishu and up to 200 civilians have been killed.

Islamist leader Sheikh Hassan Dahir Aweys returns to Somalia in April after two years in exile. However, Aweys says no to talks with the president. A crack is also said to have occurred between al-Shabaab and Hezb al-Islam led by Aweys.

At least 11 AU soldiers are killed in suicide bombings

From the end of the month, fighting in the southern part of the country is increasing, including at least 11 Burundian soldiers killed in a suicide attack in Mogadishu. It is the fourth suicide attack directed at the AU force.

At the end of the month, the new transition parliament elects moderate Islamist Sharif Sheikh Ahmed as new president. Later, former diplomat Omar Abdirashid Ali Sharmarke is appointed new prime minister for a national unity government. The new government consists of both Islamists and secular nationalists, former warlords and Somalis who have returned from exile.

Ethiopian troops leave their sites in Mogadishu. They are occupied by Islamist groups. Government-loyal forces control only two locations in the metropolitan area. The last Ethiopian forces leave from Somalia on January 25.