Slovenes have the highest standard of living in Eastern and Central Europe and are also ahead of “old” EU countries such as Portugal and Greece. The welfare system is well developed.

In addition to pensions, there are contributions to the disabled, health care and health insurance and unemployment benefits. In addition, there are child allowances and paid parental leave. All residents have health insurance that covers most of the costs for health care and medicines. The retirement age is slowly adjusting upwards, from in some cases 57–58 years to 65. 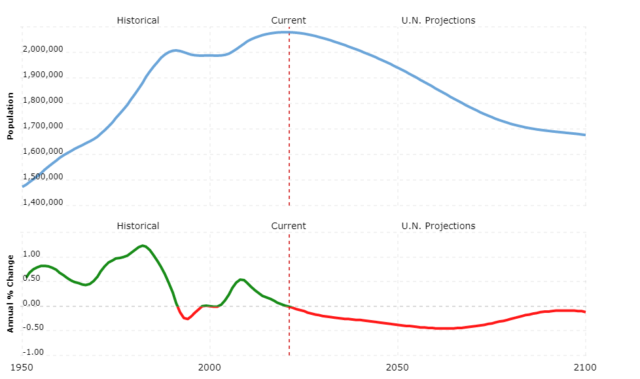 The economic crisis that hit seriously in 2012 (see Modern History and Economic Review) also affected the social security system to some extent. Among other things, the sickness benefit was reduced as well as the compensation during parts of maternity leave.

The Slovenian state has been criticized by human rights organizations for its treatment of the Roma. True, the Roma are guaranteed representation in 20 of the country’s more than 200 municipal councils, but only a few percent of the unemployed Roma have formal employment and the majority live without running water, toilets and cleaning.

Slovenia has also been criticized for the treatment of “the eradicated”, people from other former Yugoslav republics who were deprived of their citizenship by independence and who for many years stood alongside society. They had major problems with getting jobs and housing, and were without pension and social insurance (see also Population and languages).

In 2011, the National Assembly passed a law that gave homosexuals the right to adopt a partner’s biological children, but the change was halted by voters in a referendum the following year. Similarly, in 2015 Parliament gave the go-ahead for same-sex marriage, but a referendum put a stop to it later that year. Following an amendment to the bill, gay couples were allowed to marry in early 2017, however, without being allowed to adopt or undergo test tube conception.

Proportion of population with access to clean water: 99.5 percent (2015)

Public expenditure on health care as a percentage of GDP: 8.5 percent (2015)

Parliament approves budgetary tightening, which involves frozen pensions and salaries for civil servants during ongoing government negotiations. The goal is to reduce the budget deficit from 5.5 percent to 3.9 percent.

The newly started Party of Positive Slovenia led by Ljubljana’s mayor, the rich businessman Zoran Janković, unexpectedly wins the parliamentary election with 28 percent of the vote, giving 28 seats. Janez Janša’s right-wing party SDS comes second with 26 seats, while Prime Minister Pahor and his Social Democrats (SD) suffer a stinging defeat and lose two-thirds of their electorate. The party only gets 10 seats. Another four, smaller parties are entering Parliament.

The government is falling

Prime Minister Borut Pahor’s coalition government collapses after losing a vote of confidence in Parliament. The coalition is still waiting for re-election.

Parliament adopts a law that allows homosexuals to adopt their partner’s biological children.

Get off the government

Four ministers from Zares resign, remaining in the government are now only SD and LDS, 34 out of 90 seats.

No to retirement age

The government’s proposal to raise the retirement age to 65 is rejected by 72 per cent of voters in a referendum.

No to changed labor law

Eighty percent of participants in a referendum say no to changes in labor law, including increased opportunities for employers to hire people part-time. The government believes that the measure would increase labor market flexibility and facilitate the country’s economic recovery. Critics fear that the reform would lead to more jobs that could not be sustained.