There are many beautiful Mediterranean islands, but none is as diverse as Malta. The small island state south of Sicily offers ancient cultural assets, crystal clear water for swimming and diving, the Middle Ages to touch and of course a capital that combines knight tradition with EU modernity. Travelers can pay with euros in Malta and speak English everywhere, or they can sink into deserted places and try the unusual Maltese language.

The state of Malta consists of the main island of the same name, on which the airport and the capital Valletta are located, as well as the two secondary islands, Gozo and Comino, which can be easily reached by ferry, where nature was allowed to live undisturbed. Steep cliffs, racy surf, but also fine bays with sandy beaches – Malta is the holiday destination of contrasts. Anyone who then tries the classic rabbit ragout, walks in the footsteps of Apostle Paul or discovers ever more beautiful nostalgic door knockers, will have found a little treasure on their vacation.

In the following we present you the most exciting tours, the most beautiful attractions and the best sights in Malta.

The most famous port of call in Malta is the capital city of Valletta, on the north coast, or “Il Belt” in Maltese. Designed on the drawing board from the 16th century, Valletta today bears witness to the mystical Order of Malta with its knights, but also to traces of the EU with its modern parliament building. Valletta is wonderfully easy to explore, as the approximately 2 km long Republic Street leads through the walled headland.

Small shops line up against historical buildings, everything in a yellowish, glowing stone look. Towards the water, some of the staircases drop steeply and are ideal for a tour around Valletta in the dark. At the top of the capital is the fortification of St. Elmo, seemingly unimpressed by its long history. Valletta was inscribed on the UNESCO World Heritage List as early as 1980 due to its cultural richness.

If you think of Capri when you think of the “Blue Grotto”, you will be surprised by the namesake in the south of the main island. Here, too, the sea can be found in all facets between light and deep dark blue, framed by stately rocky cliffs. The Blue Grotto is about 25 meters high and is regularly approached by boats, from where an enchanting play of light can be experienced.

Along the stony south coast, you can drive through small, dreamy places with the rental car or take the very little ones to the Playmobil Fun Park. A visit to the Blue Grotto is admittedly a bit touristy, as you can only take part in guided tours, but the special play of colors is worth it!

3. The Hypogeum of Hal Saflieni

The impressive temples of Tarxien are in close proximity to Valletta. Here, inquisitive people can witness the Maltese megalithic culture, whose history dates back to the 4th millennium BC. Can be traced back. Exploring the deep ground, where Hal Saflieni’s Hypgäum can be found, is particularly exciting.

Unique in its age and state of preservation, this sight combines an underground temple with a mystical tomb and place of worship. Here you dive into human prehistoric times, a completely different world under the earth. Just like in the past, you can listen to the beautiful sounds in the acoustic room.

From the outside it hardly stands out from the usual Valletta, but inside St. John’s Co-Cathedral can hardly be surpassed in splendor. If you are looking for the most famous sights in this country, you will find the most beautiful ones in a side street of Republic Street in the capital. The co-cathedral owes its strange name to its position as the second bishopric of the archbishopric, which once again underlines the long history of the country, which has been shaped by different currents.

Inside the cathedral, guests feel like they are in the Vatican. Rich decorations, wonderful inlay work and magnificent grave slabs dominate the room. The Grand Masters of the Maltese Lodge rest here and a real Caravaggio can be admired in the oratory. A visit to Valletta cannot end without a tour of this extraordinary place of worship.

Located in the very center, the City of Silence is the counterpart to the planned city of Valletta. Mdina is the old capital of Malta and has been able to impressively retain its face from the past. Even from a distance you can see the slightly elevated fortress town, reinforced all around with a high city wall.

In fact, the awe-inspiring tourist first walks through a city gate and suddenly finds himself in another world. Narrow streets, completely preserved buildings, a magnificent cathedral transport you straight into the Middle Ages. Everything is quiet, even at peak times. Anyone who has seen Mdina understands the Maltese a little better.

Little Mosta is located a little north of Mdina, basically only separated from the national football stadium. In addition to the many other stone-shaped and historic-looking villages of Malta, Mosta basically deserves no special mention. But if you come to Mosta and have just had a coffee in a narrow alley, you’ll spot it straight away: the Rotunda Santa Marija Assunta.

St. John’s Co-Cathedral captivates with its interior, but the exterior view clearly dominates in this homage to the Roman pantheon. The Rotunda has the fourth largest church dome in the world and certainly the most impressive if you consider its limestone as a building material. The interior is a bit more Spartan, but creates a wonderful setting for the main protagonist, the dome.

7. The standing stones of Hagar Qim

If you are not enjoying the sea water in Malta, you will definitely have some form of stones in your field of vision. Perhaps the most attractive, because they are stately and functional, can be found in the south of the island in the cult center Hagar Qim. The golden yellow, quite soft limestone is omnipresent here. Quarry stone walls and watchtowers surround the area, which is characterized by dizzying quarries.

Hagar Qim is a rather lonely place from the past with large stone blocks that once functioned as a Stone Age temple. The entire complex used to be and is still a place of cult, oracle and religion. The view from outside of the open sea and the equally vast Maltese landscape is the same as it was thousands of years ago.

Gozo, Malta’s little brother, is easy to get to by ferry. Here everything is a bit quieter and the landscape richer and greener. It is important to breathe in the sunny island idyll and discover tranquil villages. Victoria (or Rabat) is Gozo’s main town.

Another of the many island attractions is Xewkija, whose domed church is not as big as the one in Mdina, but towers over the entire place even more. In the far west, at the tip of the Maltese Islands furthest from Valletta, the cliffs drop down steeply. The famous Azure Window stood here for a long time before it sank in the floods after a storm.

Comino is the little brother of Gozo, so the baby of Malta, and with its only 2.5 km² is hardly worth mentioning. If you book a boat tour here, you will find hardly any vegetation, only barren scree fields. That is why the path has to lead to the sea – more precisely to the Blue Lagoon, which not only sounds magical, but is also uniquely beautiful.

When the weather is good, the water here shines in the purest shades of blue and turns the waves of the Mediterranean into turquoise sights. There is only a very small sandy beach on the Blue Lagoon, most visitors settle in the cliffs and spend the day swimming and snorkeling in the water anyway. Comino is the most relaxed of the three main islands of Malta.

Anyone who needs a little distance from culture and bathing pleasure and is in the mood for a real curiosity should head to the northeastern tip of the main island of Malta. Here one bay follows the other and on one of them there is a small village that doesn’t fit in with the rest of the island.

Malta is a popular location for filming because of its unique landscapes and mild weather. In 1979 a Canadian fishing village was built here, which in the film was the home of Popeye the Sailor. The film was a flop, but the imaginative village still attracts with interesting details and a small amusement park – also ideal for families! 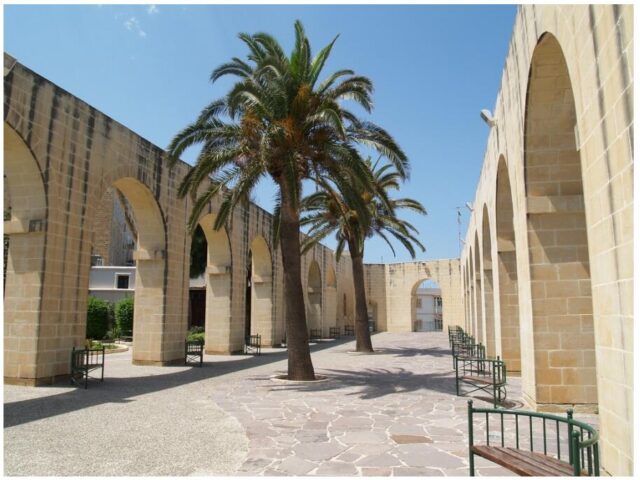