Poverty is widespread in Senegal, where nearly two-thirds of the population lives on less than two dollars a day. Health care is somewhat better than in surrounding countries, but far from adequate.

Public health is better in cities than in rural areas, and most doctors work in Dakar. About half the rural population lacks clean water, which leads to the spread of parasitic diseases and diarrhea. Around twenty children died before the age of one year. Malaria, tuberculosis and measles kill many lives. It is common for young children to die from diarrhea or pneumonia.

However, the AIDS epidemic has been fought with some success and Senegal is often cited as a positive example of AIDS prevention work. According to the UN agency Unaids, between half and one percent of the population between the ages of 15 and 49 are HIV infected. Brake medicines are heavily subsidized by the state. 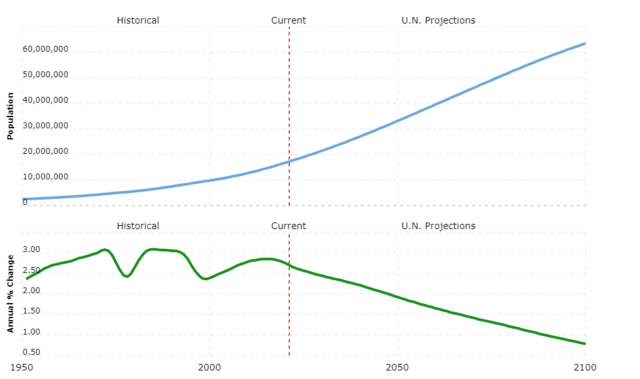 The social insurance system looks good in theory, with subsidized healthcare, maternity leave, child benefits and pensions. In practice, few residents have access to the benefits, as most people lack formal employment. Social networks are therefore important, both within the extended family and through groups for local development that especially women and young people form in both villages and vulnerable neighborhoods.

The situation of children and women

Child labor is common to bring families’ finances together. This applies primarily to work such as maids, street vendors, shoe polishers, or in family farming.

Tens of thousands of children in Koran schools are used by their teachers to beg on the streets instead of studying. The old custom of exploiting poor students in this way was banned in 2010 after pressure from the outside world, but the phenomenon is still common (see Education).

There is a long way to go for equality between women and men, although the development is progressing. Only two out of three women are employed. In the 2012 election, the proportion of female parliamentarians increased from a quarter to just over 40 percent. An increasing number of women are also appointed to high positions in the state administration.

Traditionally, rural work is divided between the sexes. During the dry season, young men clean the soil and prepare for sowing. When the rainy season comes, it is the women’s job to clean and harvest. The women also take care of most of the housework and take care of the children. In modern times, significantly more men than women have left the countryside to seek work in the cities, which has resulted in women more often taking full care of the economy and all agricultural activities.

Polygamy is common, and it is then that men have several wives. Especially in the countryside, traditional laws are often applied that disadvantage women in, for example, inheritance issues. Violence against women is widespread, especially in marriage. At the same time, the issue is increasingly attracted by human rights and women’s organizations.

About a fifth of women are estimated to have previously been subjected to genital mutilation, which often causes severe suffering. Female circumcision was banned in law in 1999. Thanks to information and attitude changes, genital mutilation is reported a few years into the 2000s almost ceased in Senegal.

Homosexuality has been banned since 1965, but the law has not previously been widely applied. In Dakar there used to be a high tolerance, and the homosexuals were a visible group, especially among wolof, even though they offended more traditional Muslims.

Several homosexuals have been arrested, and in 2009, nine men were sentenced to eight years in prison for homosexuality and for being part of a “criminal organization”. The latter was in practice interpreted as a criminalization of support work for HIV-positive and AIDS-sick homosexuals. The men were released in higher court after a few months, but many gay Senegalese perceived the verdict as a clear signal, and many have chosen to leave the country.

Proportion of population with access to clean water: 75.2 percent (2015)

Proportion of the population having access to toilets: 51.5 percent (2017)

Criticism against the new chairman of the Constitutional Council

The Opposition Socialist Party (PS) criticizes the appointment of a Wade ally as chairman of the Constitutional Council, which is the body to decide whether it is compatible with the constitution for Wade to stand for re-election in the 2012 presidential election.

France begins to withdraw its troops from Senegal.

New agreement to slow down desertification

Senegal and ten other countries sign an agreement to create a “green wall” through the Sahel, that is, the border region between the Sahara desert and the more fertile tracts south. Trees are to be planted along the more than 700-mile stretch from Senegal to Djibouti on the African East Coast, to slow down desertification.

A controversial 49 meter high statue is officially inaugurated in Dakar, to celebrate the 50th anniversary of the country’s independence. Muslim leaders believe that the statue is contrary to Islam. Others think the $ 27 million cost is too high. Many people are critical of the project being carried out by a North Korean company, as North Korea is a dictatorship.