Prosperity in San Marino is high and relatively well distributed. The country has no major class differences or social contradictions. The average standard of living is about the same level as in the most prosperous parts of Italy. Income tax is low, in line with one third of the average in the rest of Europe.

The social security systems are well developed, but in the euro crisis in recent years they have become increasingly burdensome for the state budget, not least the pension costs.

Health care is partly free or provided at a low cost. There is a hospital and several clinics. Although the quality of care is high, San Marinians have to turn to hospitals in Italy or other countries for certain forms of treatment. 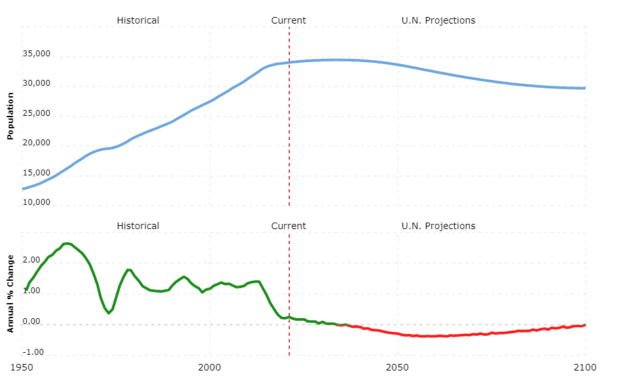 The road network in San Marino has a total length of just over 20 km. The most important route is the one that leaves from Rimini on the Italian coast, crosses the border in the northeast and winds up to Borgo Maggiore on the Titan mountain. From there, both a minor road and a cable car lead up to the capital. Public transport is by bus, and both rail and air traffic are missing. During the summer, however, both passengers and goods are transported by helicopter from Rimini.

Thanks to its picturesque location and its remarkable history, and with many historic buildings (several of which are however reconstructed in modern times), San Marino is a popular tourist destination. Almost two million tourists visited the country in 2015, many on a day trip from Italy. Tourism revenues account for an important part of the country’s GDP.

Number of foreign visitors per year