Before the 1994 genocide, Rwanda was one of the world’s least developed countries and social conditions are still poor. Nearly 40 percent of the population lives below the poverty line. However, since the turn of the millennium, living conditions have gradually improved for most Rwandans.

About a quarter of residents do not have access to clean water and around 40 percent do not have a functioning sewer system. It is nevertheless a clear improvement over 2010, when over half of Rwandans lacked such basic conditions for good hygiene. Conditions are generally worse in the countryside than in the cities. Stomach and intestinal diseases, intestinal parasites and respiratory diseases reap many sacrifices.

Nearly one in three residents are malnourished, but in the early 2000s, only half of the population had enough to eat. Child mortality is still high, but the country was able to reduce infant mortality to below average for sub-Saharan Africa in the 2010s. 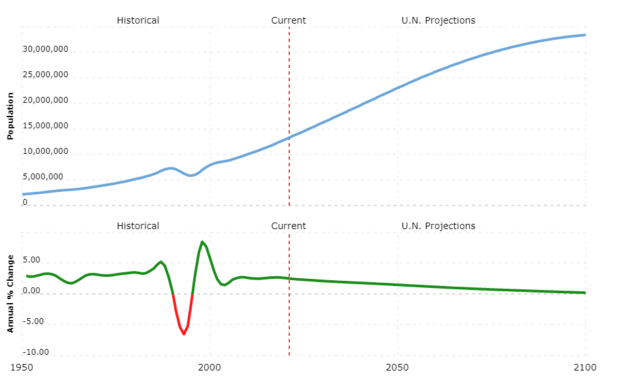 Rwanda has been severely affected by HIV / AIDS, but intensive work on the spread of the HIV virus has reduced the proportion of infected adults (15-49 years) to less than 3 percent, from about 13 percent in the 1990s. Access to brake medicines has increased significantly and is better than in most other African countries. Special efforts are being made to reduce the transmission of the virus from infected pregnant women to their children.

The reconstruction of health care after the 1994 genocide has gone quite a long way. Health care grants were increased during the 2000s and 2010s, but aid donors still account for a large portion of health care costs. Almost all residents now have access to health care and have health insurance that covers the most common healthcare needs.

The local health clinics are quite well stocked with medicines and have laboratories that can do blood and urine tests. Vaccination programs largely reach the entire population and are free of charge. Mosquito nets are also distributed free of charge.

There are still few doctors, but in return, a tens of thousands of “barefoot nurses” have been trained to treat common illnesses such as malaria and diarrhea, vaccinate children, provide advice on family planning and care for maternal health care in the villages.

The government has a vision and an action plan to make Rwanda a high-income country by 2050. Slum areas have been demolished on the outskirts of Kigali as part of the modernization of the capital. The slum dwellers have been promised new better housing, but many have protested that they were not sufficiently compensated in connection with the move. The modernization has also meant that street children, beggars and prostitutes have been placed in collection centers.

The position of women has been strengthened in the legislation, which is also evident in the administration and some other areas of society. Rwanda’s parliament has the largest proportion of female members in the world, largely due to quotas. In everyday life, however, women are still at a disadvantage, even within local politics. Violence against women is still very common.

In recent years, laws have been passed on women’s inheritance rights, which have traditionally been very weak. All property usually goes to the sons. In return, it is the eldest son’s job to provide for the welfare of the mother and any unmarried sisters’ welfare at the death of the father.

The position of children has also gradually been strengthened in recent years through a number of laws, but poverty means that child labor is still widespread. Sexual violence against children is also considered to be quite common.

In a country like Rwanda where society and culture rest on a traditional family formation, the tolerance of sexual minorities is low, although direct violence against LGBT persons is relatively rare.

Proportion of population with access to clean water: 56.7 percent (2015)

Proportion of the population having access to toilets: 66.6 percent (2017)

Public expenditure on health care as a percentage of GDP: 7.9 percent (2015)

In a UN report on the conflicts in Congo-Kinshasa, Rwandan forces are accused of murdering civilian Hutus. The report’s author writes that it could possibly be classified as genocide.

President Kagame wins the presidential election with 93 percent of the vote. The opposition, which is basically silent, urges the outside world not to recognize the election result. Election observers from the Commonwealth express “concern” over the lack of opposition candidates.

André Kagwa Rwiseerka, prominent member of the Democratic Green Party, is found murdered. His party is one of several opposition parties that refused to register for this year’s presidential election.

Journalist Jean Léonard Rugambage is shot to death by unknown perpetrators. Rugambage has been monitoring a case involving a former army chief who has fallen into disrepute with President Kagame and subsequently moved to South Africa. There, the commander of the army was subjected to a murder attempt, which he suggested was behind the regime.

Opposition leader Victoire Ingabire, who has been on the run, is arrested after her return to Rwanda, where she will run for office in the presidential election. Her lawyer is also arrested.

Presidential thinking is apprehended – and released

Agathe Habyarimana, widow of the country’s former president, is arrested in France where she has lived since the genocide. She is suspected of involvement in the planning of the massacres and has been requested to be extradited by Rwanda. She is released but is not allowed to leave France and must report regularly to the police.

French President Nicolas Sarkozy visits Rwanda. He admits that France made a mistake in the 1994 genocide but does not ask for forgiveness.