Living conditions in Romania are generally worse than in most European countries. When the entire society and economy were to change during the 1990s, living standards dropped from an already low level. Despite improvements since the turn of the millennium, many Romanians are still living in poverty, especially in rural areas.

The state social insurance system is relatively extensive, but there is a shortage of money and staff and the reforms that have been implemented have been insufficient. Health care is financed partly by the state and partly by payments by employers and employees to an insurance fund. This pays among other things the independent GPs who are usually responsible for the primary care. The state healthcare, which dominates large, is free of charge but the appropriations are too small, the administration is ineffective, the corruption widespread and the preventative care is neglected. Most hospitals have an informal price list that forces patients to pay “under the table” to receive treatment.

Romania has significantly fewer doctors per inhabitant than other EU countries. Every year, more doctors leave the Romanian health care than they enter the system. Wages in Romania are significantly lower than doctors earn in most Western European countries. 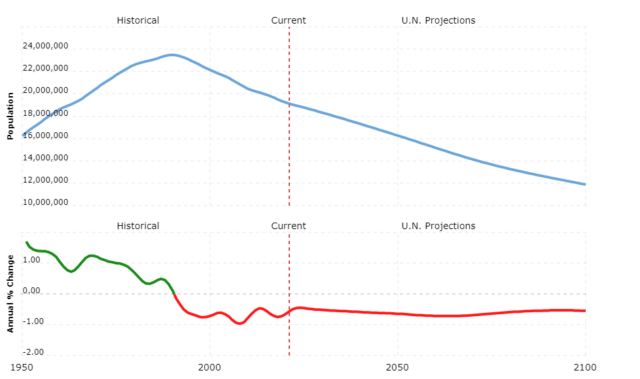 The general health level is low, partly due to cold and humid housing, poor diet, tobacco and alcohol and lack of medicines. Life expectancy is among the lowest in the EU. The most common causes of death are cardiovascular disease and cancer. Infant mortality has decreased significantly since the 1990s but is still among the highest in Europe. Many of the country’s Roma lack identity documents and therefore find it difficult to access social support systems.

The retirement age is 63 years for women and 65 years for men. Pensions are among the lowest in the EU, averaging 240 euros per month. The government has said that pensions will be raised to double that by 2022, but economists have warned that this plan is not realistic.

In order to increase the population, the dictator Ceauşescu introduced a ban on abortions in the 1970s. During this time, more than 10,000 women are estimated to have died from illegal abortions, while close to 200,000 children were placed in large institutions where they were often subjected to gross neglect. The ban on abortion was abolished in 1989 and until 1997 some 4.6 million abortions were carried out in Romania, the highest proportion in the world according to the UN. The number has subsequently steadily declined.

Children and Roma are socially vulnerable

Since it was discovered that parents and corrupt officials had begun trading with adoptive children, the business was restricted in 2001. By then, around 30,000 children had already been sent abroad. After repeated criticism from the EU, virtually all foreign adoptions were halted in 2005. Five years later, the number of prisoners under the age of 18 in the state orphanages was about 19,000 while about 43,000 lived in foster homes.

According to a report by the Council of Europe, trafficking in children in Romania increased in 2011–2015, identifying 4 622 minors who were abducted. More than half of the victims had been sold for sexual exploitation, while just over a third were used as slave laborers. A small part had been forced to beg. According to the report, the most vulnerable are Roma children and migrants. Although child labor is prohibited, many Roma children in particular work in agriculture and in household work.

Other social problems include harassment of ethnic and sexual minorities, violence against and discrimination against women, thousands of homeless children in the cities, and human trafficking, including prostitution abroad. A national authority for action against human trafficking was created in 2006.

The poor living conditions of the great Roma minority have driven tens of thousands of Roma to other EU countries after they joined the EU in 2007, trying to support themselves for seasonal jobs or begging. A five-year plan for the integration of Roma into Romanian society was adopted in 2010 but was considered to have had very limited effect. A new five-year plan was adopted in 2015 at a cost of the equivalent of EUR 95 million, partly with EU funding, but it was criticized by Roma organizations for being too vague. Romania has been criticized by the EU for not using the money made available.

Romania is a conservative country that characterizes the view of sexual minorities. Homosexuality was prohibited by law until the early 2000s. Since then, some progress has been made to protect the rights of LGBTQ people, but marriage between people of the same sex is still not allowed. The law does say that marriage can be entered into between “spouses” but in practice it means between husband and wife. In the fall of 2018, conservative forces received a referendum on a proposal that would permanently ban the same-sex marriage by replacing the word “spouses” with “husband and wife” in the law. The proposal fell when less than 20 percent of voters chose to participate. Of those who voted, 92 percent supported the proposal.

Proportion of the population having access to toilets: 84.3 percent (2017)

Public expenditure on health care as a percentage of GDP: 5.0 percent (2015)

The ex-wife speaks before Parliament

Ex-King Mihai (Michael) is invited to speak to Parliament. It happens on his 90th birthday and is the first appearance before the elected people since Mihai was forced to abdicate in 1947. Many parliamentarians applaud the speech and some shout “Long live the king!”

The application for entry into Schengen is rejected

Romania refuses to join the EU passport Schengen. The Netherlands and Finland veto an accession of Romania, despite the fact that the country fulfilled the formal conditions. The opposition calls for the departure of the Home, Foreign and Finance Ministers as a result of the failure to get the country acceded to Schengen.

The government announces new savings plans – now equivalent to about SEK 20 billion – for the state budget over the next two years. Government employees get rid of holiday money and bonuses and can only pay overtime compensation in vacation. Planned pension increases are halted for around one million Romanians.

The head of the customs office is dismissed

Around 60 customs officials and border police officers are arrested for involvement in cigarette smuggling. The head of the customs authority is dismissed after being accused of corruption.