The living standards of Poles in terms of purchasing power per person in the mid-2010s were about two-thirds of the average for EU residents as a whole. All basic healthcare is free or low-cost. The retirement age has been a political battle issue in recent years, it has been raised and then lowered again.

During the communist era, everyone would be guaranteed free health care, but because there were no resources for medical equipment and staff, the hospitals could not provide the care they would. Imported medicines were completely out of reach for patients with medium incomes.

Public healthcare costs are rising rapidly and the sector is constantly struggling with a lack of resources. It now receives competition from private practitioners and clinics. Long queues and poor public health service make the private alternatives popular, although only those who are better off can afford to use them. Healthcare financing and organization are subject to constant reform. Private insurance systems according to the American example are becoming increasingly popular. 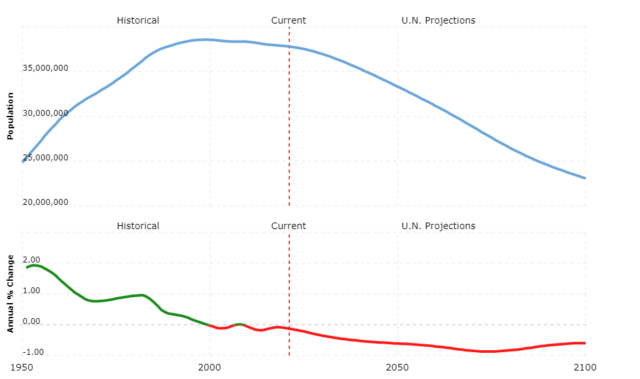 The proportion of overweight children and adolescents has increased rapidly and is estimated at around one fifth. In an effort to curb the development, Parliament banned serving junk food in the country’s schools from January 1, 2015. Despite campaigns of this type, the population’s consumption of sugar, red meat and even alcohol has increased, according to statistics from the GUS statistics in early 2019.

The pensions are paid directly from the Treasury and are financed through high employer’s fees. Several occupational groups (miners, military, police and other “uniformed officials” and others) are eligible to retire earlier, lowering the actual average retirement age of the Poles to 61 years for men and under 58 for women (among uniformed officials even lower).

Since 1999, employees’ pension funds have been accumulated in individual accounts with the State Insurance Agency ZUS, and then diverted to optional private pension funds. In 2011, transfers from ZUS to the individual accounts were lowered, which in the future will increase the pension burden in the state budget. The system of payments from the common state budget works in parallel with the individualized system.

There is a social insurance system with, among other things, sickness and parental allowance, child allowance and a special contribution to single mothers. There are also unemployment benefits. In 2016, the conservative PiS government introduced the “Family 500 plus” program. With the aim of increasing population growth, 500 zloty would be paid monthly for all children in a family except the firstborn, up to the age of 18. In families with incomes of less than 800 zloty, the child allowance would also be payable for the first child.

In public life, women are under-represented. Many women find themselves in a traditional role. Despite this, more than every third small business is run by women and there are relatively many women at middle management level in banks and insurance companies. Only a few women reach the highest positions in politics and business. Women usually have lower wages than men, and women are overrepresented in low-paid occupations in health care, schooling and care.

Abortion legislation is strict. Abortion is allowed in three exceptional cases: when the fetus is gravely damaged or malformed, when the mother’s life is in danger and when the pregnancy has occurred through rape or incest. Performing or participating in abortion can give up to eight years in prison. However, the woman cannot be prosecuted.

The law guarantees the rights of gay, bisexual and transsexual as well as queer persons, but in reality sexual minorities are not often exposed to harassment, threats and violence. There is no partnership law. Same-sex marriages are not legal and there are no laws on hate crimes involving sexual orientation. In a speech before the 2019 presidential election, President Duda compared what he called “LGBT ideology” with communism.

Proportion of population with access to clean water: 97.9 percent (2015)

Journalists are kicked for inaccuracies

The Rzeczpospolita newspaper dismisses its editor-in-chief and a journalist after an article incorrectly claiming that explosives were found in the wreckage after the Polish air crash in Smolensk in Russia in 2010.

Action against the economic crisis

The government is proposing a series of measures to combat the economic crisis, which is now beginning to be felt in Poland as well. Among other things, large state investments are made with funds from the sale of state property in industry.

Patriotic protests against the government

Around 50,000 people are demonstrating in Warsaw against the government under the motto “Awake Poland”. Opposition leader Jarosław Kaczyński uses harsh rhetoric, appeals to Polish patriotism and talks about “the cup of evil overflowing”.

The retirement age is being raised

Those responsible for martial law are convicted

Former Interior Minister Czesław Kiszczak is sentenced to two years imprisonment for his responsibility when Poland introduced martial law in 1981 (see Modern History). Former Communist Party leader Stanisław Kania is acquitted. General Wojciech Jaruzelski is also prosecuted, but the trial against him has been postponed for health reasons.