Society is dominated by a small wealthy elite, while many Filipinos live in poverty. The most vulnerable are the rural population, but in the cities more and more poor people are gathering in shanty towns. The regional differences are also large. At the beginning of the 2010s, 26 percent of residents were estimated to live below the national poverty line (ie less than $ 1.35 a day). According to the World Bank’s definition, 40 percent of the population was considered poor at the same time (less than $ 2 a day).

The severe storms that have risen across the islands have made the fight against poverty more difficult. For example, many of those who lost their homes in connection with the typhoon Haiyan in November 2013 still lived in tents or other temporary housing in August of the following year. Large groups had also lost their livelihood when stores, agricultural crops, fishing boats and other things had been destroyed in the storm. In the reconstruction initiated, efforts are being made to build better houses in the hope that they will be able to withstand new storms in the future and at the same time raise poor families’ living standards.

There is both public and private care. In recent years, the government has increased funding for healthcare. The then Aquino government was especially focused on reaching the poor population, but they still have limited access to care and lack money to pay for private alternatives. Infant mortality has nevertheless fallen from 72 per thousand born in 1965 to 24 in 2012. Maternal mortality is significantly higher in the Philippines than in other large South Asian countries. 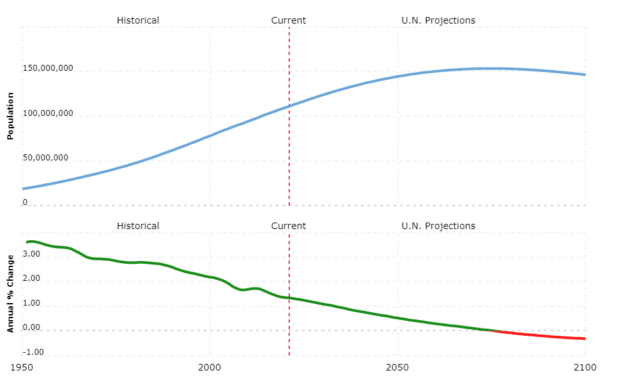 According to the UN agency Unaids, in 2014, there were estimated to be about 36,000 HIV-infected people in the Philippines, of whom as many as 85 percent of them had been infected since 2010. Although less than one percent of the population is infected, the number of new cases is increasing rapidly, especially among men who have sex with other men, a large proportion of whom are relatively young (25 to 34 years). About 12,000 people participated in various treatment programs in 2015. But darkness is believed to be high, when someone dies of AIDS, it is common for pneumonia, meningitis or tuberculosis to be the cause of death.

Unaids reported in 2017 that the Philippines has the fastest rate of HIV infection across Asia. The number of new cases was estimated to have increased by 140 percent between 2010 and 2016.

The retirement age is 65, but many employees quit working at the age of 60. For some groups, for example, miners working underground, 60 years apply.

In recent years, the position of women in society has been strengthened. In 1992, women got as much rights as men for inheritance. In terms of level of education and access to care, the gaps between men and women have decreased significantly. In the cities there are many women in prominent position. According to a report on world equality from the World Economic Forum 2017, the Philippines ended up in 10th place, largely because women and men have roughly the same level of education (including higher education), with the exception of some Muslim areas. When it comes to political influence, there is a bigger gap, but the Philippines still ended up in 13th place in the world.

In 2016, just over one in four congressmen were women, 86 of the 292 members of the House of Representatives were women and 6 of 24 senators. 12 women were elected governors that year. More women than men registered to vote and turnout was somewhat higher among women than among men.

Divorce is prohibited by law. It is common for men to have multiple families and it gives status to men to have many children. The courts usually approve divorces that have taken place in other countries if one of the spouses comes from another country. In a separation, the mother usually receives custody of children for seven years, unless a court decides otherwise. It is also possible to separate legal and claim divorce (civil annulment), but those who do so are not entitled to remarry and it is a lengthy process that costs a lot of money.

In Mindanao in the south, women have fewer rights than elsewhere in the country. It allows polygamy and arranged marriages. Boys can get married at age 15, while girls can be even younger. In the rest of the country, 18 years apply, but anyone under 21 must have parental permission. However, Muslim couples may differ, in accordance with Muslim family law.

Several legislative proposals to make contraception more accessible have fallen against opposition from the Catholic Church. In 2014, however, a new law allowing contraceptives could take effect. According to it, state-subsidized contraceptives should be distributed to poor couples, sex education will be compulsory in schools and health care personnel should be trained on family planning issues. Women who suffer from complications after illegal abortions are entitled to care. The hope is that the new law will help to reduce the high maternal mortality. According to WHO statistics, about 120 Filipino women die out of 100,000 in connection with pregnancies.

The government has been running a program since 2007, Pantawid Pamilya – inspired by similar projects in Brazil and Mexico – where poor families receive financial support if they let their children go to school, take them on regular health checks and make sure they are vaccinated.

In 2013, more than 1,600 rapes or rape attempts were reported. The number of abuses is believed to be considerably greater than that and few perpetrators are convicted of rape. It appears that women arrested by police are subject to rape or other sexual abuse.

Prostitution in connection with tourism is a major problem. In 2003, prostitution legislation was introduced that is similar to the Swedish one, that is, customers are criminalized. But the punishment is often mild, and few are sentenced except in cases where someone has exploited a minor. Since a new law was passed in 1996, the authorities have been actively working to combat child sex trafficking.

Human trafficking is another major problem. Many women are exploited in the sex industry in Asia, as well as the Middle East, North America and Western Europe. Other forms of forced labor also occur, abroad and within the country. The victims are usually poor Filipinos from the countryside who moved to the cities, especially those who fled the violence in the south.

In 2012, a criminal investigation was initiated against a pedophile network where the perpetrators, many of whom were in the western world, including Sweden, paid to see children being exploited sexually streamed over the internet. In 2012, a new law was introduced that forbids cybersex. About 60,000-75,000 children are believed to be exploited in the sex industry.

The crime rate is high. In many parts of the country, but especially in Mindanao, there are so-called death squads who carry out their own law enforcement and murder criminals, and often people from poorer conditions, thieves, drug addicts and gang members. The war on drugs started by Duterte at the time of his takeover in 2016 meant a stronger grip on these groups in other parts of the country as well. According to Human Rights Watch, up to 12,000 people had been killed by the end of 2017. Several thousand of them had been killed in connection with police operations, but the vast majority had fallen victim to death squads (see Current Politics and Political System).

LGBT rights organizations were started relatively early in the Philippines, and the first gay parade in Asia was held in the Philippines in 1994. However, there is some discrimination against LGBT people (homosexuals and transgender people). Ahead of the 2010 election, a political party, Ang Ladlad (Out of the closet) for LGBT people had to register after being twice rejected by the Election Commission, partly because of objections from the Catholic Church. The Supreme Court had then ruled that the Election Commission’s decision was contrary to international agreements on political rights. However, the party has failed to win any place in Congress.

Proportion of population with access to clean water: 90.5 percent (2015)

Proportion of the population having access to toilets: 76.5 percent (2017)

Public expenditure on health care as a percentage of GDP: 4.4 percent (2015)

The road network has major shortcomings. The country’s main road is the Pan Philippine Highway which extends from Laoag in the north to Zamboanga in the south. An upgrading of the roads is ongoing. Most of the passenger and freight traffic takes place by road. Despite the lively traffic, there is a great lack of transport in Manila and the surrounding area.

The commuter train system in the capital has been greatly expanded since the 1990s and several new routes are underway. Construction of a metro system in the metropolitan area began in 2019 with the help of Japanese money.

A special feature of public transport is the so-called jeepneys, which from the beginning were rebuilt military jeeps adorned with colorful patterns. However, older vehicles will be taken out of traffic from 2020, due to emissions and shortcomings in safety.

In the hinterland most people travel by bus. Train traffic is available at Luzon and Panay. The formerly worn railway on Luzon began renovating in 2006 and new sections are being built, partly with the help of Chinese money.

Maritime traffic is important. The largest ports are in Manila, Cebu, Iloilo, Cagayan de Oro, Zamboanga and Davao. The local ferries are often worn. In 2008, 800 people were killed when a passenger ferry crashed into a storm after ignoring a typhoon warning. The merchant fleet is worn out and many vessels are not seaworthy. In 2013, almost a thousand Filipino ships were registered.

International airports are located at Manila (Ninoy Aquino International Airport, named after the current president’s father who was shot dead there in 1986), Cebu, General Santos and Davao. The national airline Philippine Airlines flies both nationally and internationally. The airline market has been deregulated and new companies have started operating in recent years.

Former US military bases Subic Bay and Clark have established themselves as transhipment stations for freight traffic via ships and aircraft respectively.