Panama has a fairly high income per person compared to other countries in the region, but the distribution of income is one of the most uneven in the world.

Good economic growth has contributed to reduced poverty over a number of years. According to World Bank estimates, 14 percent of Panamans lived during the official poverty line in 2017, and about 6.5 percent were extremely poor. The differences are large within the country. Poverty is most prevalent in rural areas where indigenous peoples are in the majority. Afropanamans are also over-represented among the poor.

The social security system includes sickness benefit and pension, but it only covers two thirds of the population, mainly Panamans with formal employment. The system risks collapsing due to lack of money. An attempt to raise the retirement age from 57 years for women and 62 years for men was halted by widespread protests in 2005. 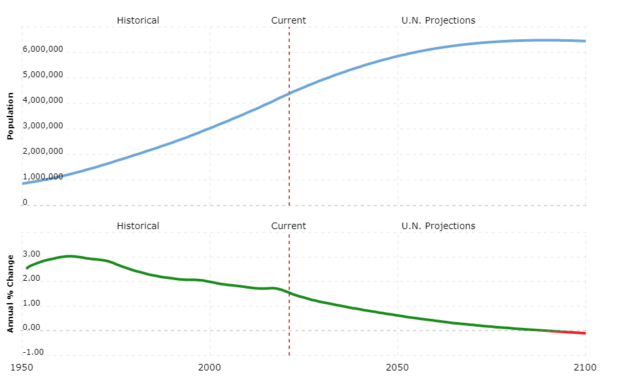 Health care has been expanded in recent years, but major differences remain between different regions, especially between the city and the countryside. Some of Latin America’s best equipped hospitals are located in Panama’s major cities, while resources are scarce in the countryside. Malnutrition is a common health problem.

Panama has many street children and an extensive child prostitution. Many women are also exploited in the sex trade. Violence against women in the home is a common problem and rarely leads to convictions.

Homosexuality was decriminalized in 2008, but homosexuals are often subjected to harassment and discrimination. Among other things, they are prohibited from becoming military or police officers. There is no partnership or similar legislation.

Abortion is permitted only if the woman’s life or health is in danger, if the pregnancy is the result of rape or incest, or if the fetus is severely damaged.

Proportion of population with access to clean water: 95.0 percent (2015)

Proportion of the population having access to toilets: 83.3 percent (2017)

Public expenditure on health care as a percentage of GDP: 7.0 percent (2015)

The Free Trade Agreement with the US enters into force (see July 2011).

New setback for the president

President Martinelli suffers another setback and is forced to pull back a recently passed law following violent protests that require the lives of three people, including a nine-year-old boy. The law would allow the sale of state-owned land in the Colón free trade zone. The government’s purpose is to stimulate development, but both Colón’s Chamber of Commerce and the trade union movement and various civic groups oppose the law, which they fear will strike jobs and drive down wages.

The National Assembly approves amendments to the electoral laws which, among other things, deletes the proportional element with party lists in the election to the National Assembly. It is further stated that primary elections must be held six months before the presidential election, which means that the time for the official election movement is shortened. The opposition is sharply critical and claims that the changes favor the incumbent government.

President Martinelli and the national police chief intervene to lift a blockade of the newspaper La Prensa, by workers from a construction company who surrounded the office with trucks. La Prensa had written that the company had received favorable government contracts worth millions of dollars.

Opposition alliances are formed before the election

The Revolutionary Democratic Party (PRD), the Panamist Party and the People’s Party (PP) form an opposition alliance – the Democracy Front – before the 2014 elections. The three traditional rivals come together in response to President Martinelli appointing three judges to the proposed new Constitutional Court (see January 2012), even though it has not yet been set up. Opposition parties are also protesting against the government’s proposal to sell half of the state’s 49 percent stake in a telecom company, which it believes is a way for the party to raise money before the election. Protests in Panama City against the proposal degenerate into violence and a parliamentary meeting is suspended after fights broke out between members. As a result of the protests, Martinelli withdraws both proposals.

The corruption scandal discovered in April leads President Ricardo Martinelli to sue Vice President Juan Carlos Varela for slander, at $ 30 million. Varela has said, among other things, that Martinelli asked him (when he was foreign minister) to appoint Valter Lavitola as honorary consul in Rome, which the president denies.

The president is suspected of corruption

President Martinelli gets involved in a serious corruption scandal when a former employee of Italy’s former Prime Minister Silvio Berlusconi is arrested in Italy, accused of fraud. Valter Lavitola, among other things, must have directed Martinelli to obtain valuable construction contracts. According to media reports, Martinelli, a cousin of him and Panama City Mayor Roxana Méndez, must have received suitcases filled with cash. Roxana Méndez is closely allied with Martinelli.

Following protests and several weeks of negotiations, President Martinelli concludes an agreement with the indigenous peoples of the Comarcan Ngöbe-Buglé, on the use of natural resources in the area (see February 2012). The agreement means that all new mining projects in comarcan are stopped and that future hydroelectric projects must be approved by the residents (see also June and July 2010).

Ex-president is sentenced for slander

Former President Ernesto Pérez Balladares is sentenced to $ 3,000 in fines or a year in prison for defamation of an audit chief he has called “drug offender” (see also April 2011).

Unrest erupts in connection with protests against mining and hydroelectric projects in comarcan Ngöbe-Buglé (see Political system). Two people are killed and dozens injured when police try to disperse members of indigenous peoples blocked by the Inter-American highway. Demonstrations occur in several places, the universities of Panama City are closed down, banana workers strike and police stations are set on fire.

A committee presents a proposal for constitutional amendments. Among other things, it is proposed that a constitutional court be established, and that the number of members of the Supreme Court be increased from nine to twelve. Furthermore, a ban on direct re-election of MPs is proposed. On the other hand, the proposal contains nothing about changed rules in the presidential elections, something that has been hotly debated. Many have speculated that Martinelli wants to change the constitution in order to be eligible for re-election in 2014 (see also Political system).

Human rights violations should be investigated

The Government announces that a Truth Commission established under the Government of Moscow (1999-2004) will be reactivated to investigate human rights violations during the military dictatorship 1968-1989.