In theory, North Korea is a classless society, but in practice there are large gaps. A unique classification system means that many citizens are excluded from economic and social benefits. Poverty is widespread and the population has suffered from severe malnutrition and even mass violence since the 1990s.

The political elite lives in great abundance. The highest ranking is Kim Il-Sung’s (1912–1994) family and family, followed by Kim’s old revolutionary comrades and their families.

Citizens are ranked according to a socio-political ranking system – called songbun – with some 50 subgroups. The system is based on something that can be described as an intermediate between class and caste. People are measured on the basis of family history and loyalty to the revolution and the supreme leader. The rank of a family determines an individual’s access to food rations, healthcare, housing, education and career. Songbun even controls who you have the right to marry.

The country’s growing economic problems from the mid-1970s eroded the social protection networks that were comparatively good. Economic mismanagement, flooding and drought led to more than one million people dying from starvation or famine-related illnesses in the 1990s (see Modern History). 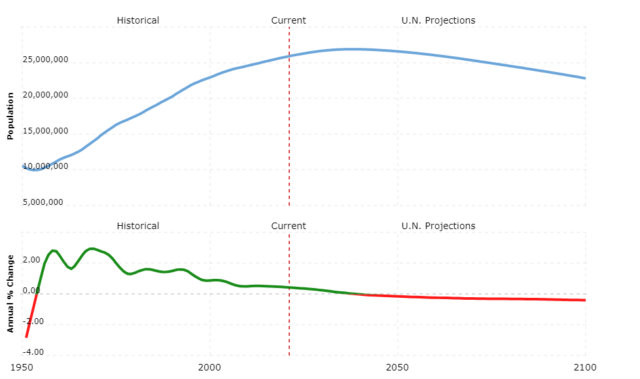 Since then, North Korea has received major food deliveries from, among others, the United Nations food program WFP. The proportion of people suffering from malnutrition has decreased, but it was estimated that by the middle of the 2010s it would still be around one third of the population. Every third child is small for their age. The state food rations are small, and the diet is nutrient-poor. A majority of the population is still at risk of acute food shortages.

There is a shortage of medicines, heating, water and electricity. Diseases such as tuberculosis, polio and malaria have again become commonplace.

Obligations towards the family have traditionally been overriding other duties. The father has been the head of the family and the eldest son has had special responsibility. Women have had lower status than men in traditional Korean culture. Even in today’s North Korea, men are more likely than women to pursue a career in politics, but the education system does not seem to discriminate against women, and the proportion of working women is high.

The ruling Labor Party acts as the moral guardian of the North Koreans and regulates their lives in detail. Everyone must belong to some political organization. The individual does not choose either place of residence or work freely. The application to the right authority is required for relocation but also for vacation travel or just weekend getaway. Ordinary families often have to wait for their vacation quota, while the most devoted to the party and the state can be rewarded with family holidays.

A newlywed couple is assigned a house or apartment, while others often have to wait to get somewhere to live. The dwellings are usually small, and it happens that three generations must live together.

In the past, North Korea – at least officially – had well-developed free healthcare and social care. Free daycare, paid maternity leave, sickness benefit, old-age and early retirement pension were formally guaranteed. Women were reported to have the same pay as men for the same work. The low wages were accompanied by heavily subsidized rents and food rations.

The South Korean vessel Cheonan loses after being hit by a torpedo fired from a North Korean submarine. 46 crew members die.