Malta has a well-developed social insurance system. Public healthcare and medicines are free of charge for all citizens.

Malta has a well-developed social insurance system. Public healthcare and medicines are free of charge for all citizens. The tens of thousands of boat refugees who have made their way to Malta since the 2004 EU accession often live in difficult conditions.

During the economic upturn of the 1990s, the standard of living of the Maltese rose and is now at the same level as in other southern European countries.

Although measured by Western European dimensions is not a rich country, it has a fairly comprehensive social insurance system. All employees are entitled to a minimum pension. Women born before 1952 can take their pension from the age of 60 and men in the same age group from the age of 61. For persons born from 1952, the retirement age is gradually increased, up to 65 years. But the pension system is not stable, especially when the population is aging at the current rate. Several measures, besides raising retirement ages, are likely to be needed to ensure the levels of future Maltese pensioners (see also Labor Market). The Government has called on the Maltese to take out private pension insurance. 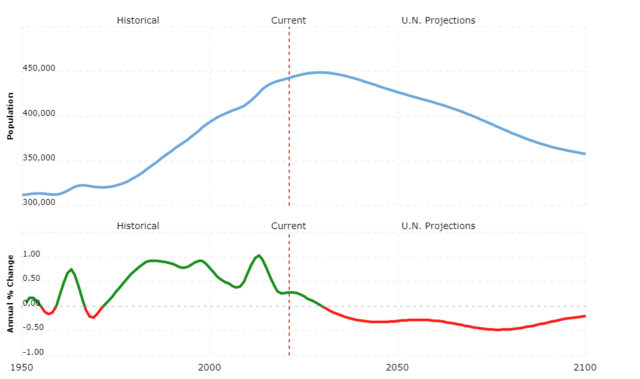 There are also sickness and accident compensation and unemployment insurance. Women who give birth are entitled to 14 weeks of fully paid maternity leave.

Social costs have risen due to population growth. A private healthcare sector has emerged. The country has a dozen larger hospitals with a total of over 1100 doctors. A new central hospital with research and teaching was inaugurated in 2007 and was then one of the most advanced hospitals in the Mediterranean region.

Increased violence against women in the home has resulted in increased penalties for this type of crime. A special commission has been appointed to monitor the development of women’s violence. There are state-sponsored women’s shelters for vulnerable women and children. Women are poorly represented in the labor market as well as in parliament, the government and corporate management.

The strong position of the Catholic Church is evident in the legislation. Abortion is illegal and can lead to imprisonment both for those who perform an abortion and for the woman herself. However, there are no restrictions on contraception. Divorce was allowed only after a law change in 2011. In 2014, it became possible to register partnerships and in 2017 it became legal for gay couples to marry.

Public expenditure on health care as a percentage of GDP: 9.6 percent (2015)

Divorce bans are voted off

Parliament voted with 52 “yes” to 11 “no” to legalize divorce. The vote figures are seen as a surprisingly big victory for the yes side. The proposal has been tabled by a member of parliament from the Nationalist Party, despite the fact that the party opposes the legalization of divorce. A majority of Nationalist Party members vote yes and thus go against the party’s official stance. The Labor Party is also on the yes side. Among those who vote no are Prime Minister Gonzi, who believes the law would weaken the family. Malta is the last EU country to abandon the ban on divorce. The law comes into force in October 2011.

Yes to a divorce in a referendum

In an advisory referendum, 54 percent of Maltese say yes to allowing divorce, which is still illegal in the Catholic country at the time of the vote.

Refugee flows from Africa to Malta are increasing due to the democratic uprising in North Africa and the civil war in Libya.