According to the UN agency UNDP, Mali is among the world’s ten least developed countries. Malnutrition and inadequate health care contribute to low life expectancy. The hygienic conditions are poor, which causes diseases such as malaria, cholera, tuberculosis and various gastrointestinal disorders to flourish.

Half of Mali’s population lives in poverty (that is, less than $ 1.9 a day) according to the UN agency UNDP. If one also takes into account factors such as health, living standards and education, eight out of ten residents are poor according to UNDP.

Less than half of the population is estimated to have access to basic health care within a reasonable distance from home. The lack of care is particularly great in northern Mali.

In the 2000s, the state began to invest more money in health care, including vaccination campaigns and measures to prevent the spread of AIDS. The proportion of HIV-infected males is low compared to the spread of the AIDS virus in southern Africa. 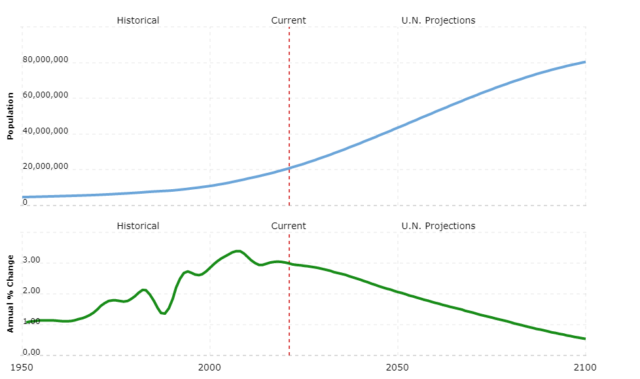 The armed conflict that has plagued Mali since 2012 (see Current Policy) has resulted in increased suffering and deteriorated social living conditions for a large part of the population. Access to food, clean water, medicines and education has decreased. Millions of people are in need of humanitarian food aid. In April 2020, the United Nations food program WFP described the situation as “extremely worrying” when the country was also hit by the corona pandemic.

The small group of males who have a formal employment is covered by a system that covers the most basic social insurance. For the rest of the population, there is no social safety net at all beside the family.

Traditionally, Mali has been a strict class society where slaves were at the bottom of the social ladder. Although slavery still exists today, this class divide is about to be loosened up and social mobility is increasing. Many ethnic groups are divided into clans, which consist of several households that hold together under a respected older male clan leader.

It is allowed for a man to have up to four wives, and it is not uncommon for at least two. The wives usually have separate homes near each other and often share in the housework. The husband either has his own house where the wives come or he moves between the wives’ houses.

In the cities, some people now live in nuclear families instead of in large families. Most often these are highly educated couples with a Western influenced lifestyle.

Seasonal workers and guest workers abroad generally maintain good contact with their family in the home country and usually send home money to their relatives there.

Discrimination against women is prohibited by law, but is still common. Women generally have a lower level of education than men, and are poorly represented in politics and business. Abuse and abuse of women is not uncommon. Almost all women have been subjected to genital mutilation, which is not prohibited by law. However, the state is campaigning against the intervention. Women in the law have the same right to inherit as men, but in practice the daughters are often discriminated against at the time of inheritance. On average, a Malian woman is 16 when she marries. Arranged marriages occur, especially in rural areas.

After major popular protests, the then President Touré in 2009 chose not to sign a new law passed by Parliament aimed at strengthening women’s rights. The bill had been harshly criticized by Muslim groups who considered it to be Islamic and forced by Western countries. It was returned to Parliament for a review, which led to a complete reversal. The new Family Law that the President finally signed in January 2012 states that the husband is the head of the family, that a wife must obey her husband and that girls have the legal right to marry at the age of 16. Among others, the International Human Rights Federation (FIDH) described the law as “the exact opposite of the principle of equality and non-discrimination”.

Child rearing is to a large extent the responsibility of the village collective, almost as much as that of the parents. Up to the age of 2-3, children are often given an easy education and are rarely punished.

Many Malian children are forced to work even though child labor is prohibited. The children work primarily in agriculture and in homes. Trafficking in children occurs, especially for work on plantations, but also in the homes and mining industry. Thousands of children were sold during the 2000s to plantations in Ivory Coast. The children are tricked away from their families with promises of wage labor but are instead bought by plantation owners, who force them to work under slave-like conditions. Even more children are forced to work in households in neighboring countries. Mali has tightened the legislation against child trafficking with a sentence of up to 20 years in prison.

The armed conflict in the 2010s has hit the children hard. In April 2020, the UN Children’s Fund published a report showing that hundreds of children were killed, mutilated or separated from their parents in 2019 alone.

Mali’s laws and customary law do not explicitly prohibit homosexual, bi or trans sexuality, but in society, conservative attitudes towards LGBT people are widespread and homosexuality is almost taboo.

Prejudice and discrimination make it extremely difficult to live as openly gay. There are no laws that prohibit hate crimes or discrimination. It is not allowed to form organizations that work to strengthen the rights and protections of LGBT people. It is forbidden for gay couples to adopt children.

Proportion of population with access to clean water: 74.3 percent (2015)

Proportion of the population having access to toilets: 39.3 percent (2017)