More than half of Malawians live in poverty with an income below $ 1.25 a day, according to the World Bank. Poverty is worst in rural areas in the north, while income disparities are greatest in cities.

Four out of ten children are chronically malnourished, and child mortality is high. The most common direct causes of death are malnutrition and malaria. Tuberculosis is also common. Health care is one of the largest items in the state budget, but the funds do not go far enough. There are two doctors and 28 nurses per 100,000 residents.

About 10 percent of Malawians over the age of 15 are said to be infected with HIV. The number of orphans is estimated to be over 1.3 million, of which about half have lost their parents to AIDS. In a decade from 1996, life expectancy dropped from 52 years to 38 years. Since then, the state-funded distribution of free anti-AIDS brake medication has increased significantly, which has reduced the death toll. In 2013, half a million Malawians received free brake medication compared to 4,000 people in 2008. The lifespan has now increased to 55 years. 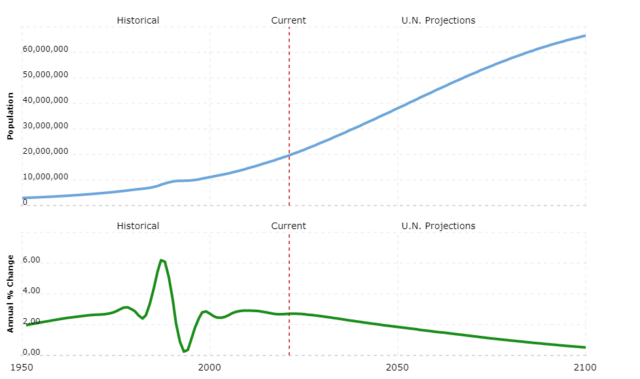 Malawi has no social security system. A law on pensions for those who have a formal employment has been adopted but not implemented.

Malawi is a male-dominated society despite the fact that the majority of residents live in matrilinear communities (see Population and Languages). In practice, women are discriminated against and are often subjected to violence. Girls are not given the same right to education and women are expected to run the home. Trafficking in women and children occurs, and girls are not often subjected to sexual abuse, both at school and at home. Poverty drives families to borrow money or livestock from elderly rich men by selling young daughters. By law, girls are required to be 18 to get married, but the law is not complied with, and child marriage is common.

Child labor becomes more common, even though the law prohibits the employment of children under 14. The children work mainly in agriculture. About 80,000 children are estimated to work on harvesting tobacco. They usually lack protective clothing which can lead to nicotine poisoning when the leaves come into contact with the skin.

Proportion of population with access to clean water: 67.2 percent (2015)

Proportion of the population having access to toilets: 26.2 percent (2017)

Public expenditure on health care as a percentage of GDP: 9.3 percent (2015)

Ex-President Muluzi is prevented from running for election

Several opposition politicians and former security chiefs have been arrested since President Mutharika accused his representative Muluzi of a conspiracy to oust him. Muluzi is interrogated by police, placed under house arrest, but later released.