The population was severely affected by the wars in the 1990s and early 2000s. Hospitals and health centers became poorly accessed and hundreds of thousands of people lacked the opportunity to receive care; there is still a shortage of medicines and equipment. The Ebola crisis of 2014–2015 showed major shortcomings in the health care sector and in addition seized large parts of the few existing health care resources.

To be able to provide basic care to everyone would require at least ten times as many doctors as today – many of today’s doctors are foreigners working for international organizations. Although the number of clinics doubled between 2006 and 2012, only about a quarter of Liberians have access to healthcare within five kilometers or an hour on foot; only close to half of the clinics have reliable electricity or can safely dispose of contagious waste; 13 percent lack access to clean water.

Malnutrition is a serious problem, as are diseases such as HIV / AIDS, TB, cholera, malaria and yellow fever. A large part of the population has been driven away from their homes in rural areas and forced to live under poor sanitary conditions in the refugee camps of cities. Child mortality is high, but from 2009 there has been a dramatic improvement, thanks in part to vaccination campaigns and vitamin supplements. However, according to the UN Children’s Fund Unicef, 15 percent of children still die before they turn one year old. 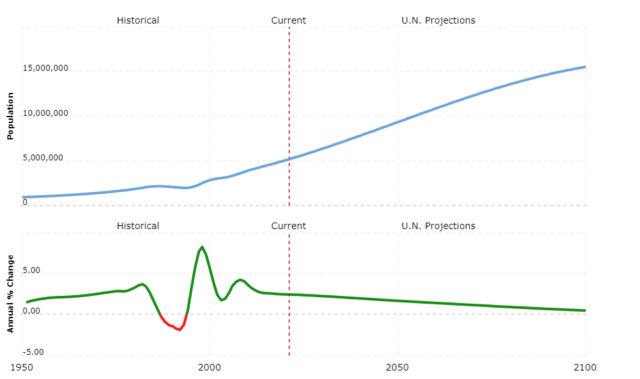 HIV / AIDS increased rapidly over a number of years, not least because of rape and a general social breakdown during the civil war; The UN estimates that around 40 percent of all girls and women were then raped. While the UN agency Unaids estimated the proportion of adult HIV infected in the population to 5.9 percent in 2003, then-president Ellen Johnson Sirleaf claimed three years later that the percentage increased to 12 percent. However, other statistics indicate that the spread has slowed down significantly in recent years; About 1.2 percent of residents between the ages of 15 and 49 were expected to live with HIV in 2014.

The outbreak of the contagious disease Ebola had, until October 2015, when it was largely considered over, required almost 5,000 lives (see also Calendar). In addition, the Ebola contributed to the fact that the formerly high mortality rate in a cot, which had decreased substantially after the war, increased sharply again.

Liberia also has among the highest figures in the world in terms of post-traumatic stress, a result of 14 years of civil war. During the wars, all military forces conducted extensive forced recruitment, often by minors. Unicef ​​has estimated that ten percent of the rebel groups’ soldiers were children under 15 years. Often they were dragged to stand out and dare to participate in battle. The result has been severe drug problems among former soldiers.

In addition, the crime rate is high after the war. The most common are armed robberies and rapes. But relief workers and staff in peacekeeping forces have also been accused of forcing young girls to sex in exchange for food or money for school fees. Most of the rape victims have been for twelve years, some even younger.

At the beginning of 2018, female genital mutilation was banned, while a new law was passed to strengthen the protection of abused women.

With limited resources, efforts are now being made to rehabilitate war-traumatized child soldiers and raped women.

Gay relationships are condemned by society at large and are prohibited by law.

Proportion of population with access to clean water: 69.9 percent (2015)

Proportion of the population having access to toilets: 17.0 percent (2017)

Public expenditure on health care as a percentage of GDP: 15.2 percent (2015)

The president is appointed

The Truth and Reconciliation Commission names President Sirleaf Johnson as one of about 50 people who should be banned from public office for 30 years for helping fund the civil war.

Former Interim President Gyude Bryant and four others are being indicted on a $ 1 million fine from the state oil refinery. (In September, Bryant is also acquitted of $ 1.4 million theft from the Treasury.)

Former President Charles Taylor’s son “Chuckie” is sentenced in the US to 97 years in prison. The verdict concerns torture that must have been carried out during the father’s time in power. Chuckie Taylor then led a semi-military security force.