Resources are unevenly distributed in Kenya, more so than in most neighboring countries. Almost half of the population lives in poverty while there is a relatively large middle class. The richest tenth of the population controls around 40 percent of the assets.

An unusually large proportion of the rural population for the region has no land at all, which contributes to many families living in deep poverty. More and more people are moving to the larger cities, where the slums are spreading. The reason why many are landless is that large land areas have been seized, during the colonial era but also under the governments that have ruled since independence (see also Older History and Current Politics).

High population growth, drought, floods and ethnic conflicts have worsened living conditions for many Kenyans. The AIDS epidemic contributed to the expected life expectancy falling during the 1990s, but now it is increasing again. Nearly half of the population does not have access to clean water.

In the wake of the economic crisis, crime has increased rapidly. 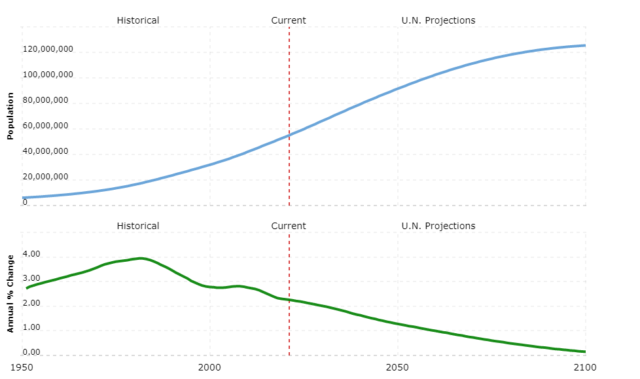 In health care there has been a focus on primary care. Free care is to be offered to the poorest in the population, but in rural areas many people do not actually have access to health care. There is a great lack of medical equipment and medicines.

Immune deficiency disease AIDS has hit Kenya hard. The AIDS epidemic has contributed to increased infant and maternal mortality. Almost twice as many women as men are HIV infected. However, both the spread of infection and the mortality in the disease have slowed down; the proportion of infected persons is estimated to have dropped from about 14 percent in the mid-1990s to 6 percent in 2012. Kenya has, among other things, invested in brake medicines, information and male circumcision for preventive purposes.

Diseases such as malaria and tuberculosis also pose major public health problems. In addition, the mortality in traffic is very high, the figures are among the worst in the world.

Drought is a recurring problem in agricultural dependent Kenya. The most severe drought of over half a century hit the region in 2011. Nearly one tenth of Kenyans lived according to the UN during the famine in late summer. The situation was exacerbated by sharply rising world market prices for food.

Gender discrimination is formally prohibited, but in reality it is far from gender equality. Women often contribute most of the family’s income and are simultaneously responsible for the children as well as for heavy work, such as fetching water and firewood. Widows often inherit the traditional right to use the land, while legal ownership is usually inherited by the husband’s family. In the event of a divorce, the woman often loses access to the land. About a third of the country’s households are led by women. A large proportion of them live in poverty. The men often leave the family to look for work in the cities.

Multiple marriages occur but have become less common, partly because of criticism from the church and partly because it is expensive for a man to have several wives. In 2014, however, a new law was passed that makes it legal for a man to marry several women, without having to consult with former spouses. At the same time, people under 18 were forbidden to marry, women were entitled to half of the assets acquired during the marriage.

Genital mutilation of girls under the age of 18 has been prohibited by law since 2002 and is completely prohibited since 2011. However, the procedure is still being carried out, although the latter law also criminalizes both failure to report genital mutilation and stigmatization of those affected. Around one-third of Kenyan women are estimated to have undergone surgery.

Violence against women is a widespread problem. According to women’s rights organizations, rape included more than half of the violent crimes reported in connection with the 2008 outbreak (see Modern History). In the majority of cases, police were charged with committing the abuse. Men were also subjected to sexual violence.

Women are also under-represented in politics. However, the new constitution that was adopted in 2010 stipulates that one third of all members of elected parishes must be women. After the 2017 election, the 22 National Assembly’s 290 directly elected members are women. Three women were also elected to the Senate, and three of 47 governors are women.

Many children live in difficult conditions due to poverty. According to official estimates, around 30,000 children are exploited in the sex trade.

In 2014, Kenya stopped all foreign adoptions of Kenyan children.

Same-sex sexual relationships are prohibited by law and can result in long prison sentences of up to 14 years.

Proportion of population with access to clean water: 58.5 percent (2015)

Proportion of the population having access to toilets: 29.1 percent (2017)

A bomb thrown into a bar in the tourist town of Diani south of Mombasa injures ten people. No group is to blame for the attack, but the authorities suspect militant Islamists.

The president protests against a new law

Kenyatta vetoes the controversial media law and says via a press release that some changes must be made to the new law.

The International Criminal Court (ICC) is changing and decides at the end of the month that President Kenyatta must be present throughout the trial against him.

UN Refugee Agency UNHCR concludes agreement with Somalia and Kenya to persuade more than half a million Somali refugees in Kenya to return home over a three-year period.

A rape case in October attracts a lot of attention, when three men who raped a 16-year-old girl by the police were punished for cutting the grass outside the police station. At the end of the month, a million signatures have been collected to bring the perpetrators to justice.

The ICC demands the presence of Vice President Ruto

The International Criminal Court (ICC) decides that Ruto must attend most of the trial against him, even if it would mean that the vice president misses important meetings. The issue of Ruto’s presence in court must be decided on a case-by-case basis, the court announces. Thus, the ICC tears up an earlier decision that gave Ruto greater opportunities to be absent.

The International Criminal Court (ICC) is meeting Kenya to a certain extent, saying that Kenyatta does not have to be present throughout the trial. However, the Court points out that it must be in place when it starts and when a possible judgment is served

Kravaller breaks out in Mombasa after a leading Muslim minister, Ibrahim “Rogo” Omar, and three more people were shot dead.

Journalist is suspected of trying to mutate ICC

The International Criminal Court (ICC) issues an arrest warrant against a journalist suspected of attempting to bribe the prosecutor’s witnesses in the case against Vice President Ruto. The journalist, who hails from President Kenyatta’s hometown of Eldoret, has previously worked for a newspaper purchased by a media company where the Kenyatta family has strong ownership interests. ICC Prosecutor Fatou Bensouda calls on Kenya to immediately extradite the man to The Hague.

Attacks in Nairobi lead to many deaths

At least 67 people are killed, including 61 civilians, and 170 injured when a group of people attack the Westgate Mall in Nairobi, in a drama that lasts for almost four days. The Somali Islamist group al-Shabaab takes on the blame for the attack.As Kenyan security forces intervene, fires fire. The Kenyan security forces are supported by Western experts, including Israeli experts. When the drama is over, four assailants have been killed and eleven arrested.

The trial of Ruto and Radio Chief Joshua arap Sang begins on September 10 with the Kenyan Vice President in place.

Decision to leave the ICC

Parliament votes for Kenya to leave the International Criminal Court (ICC); Most of the opposition, however, will go ahead of the vote.

Another two of the dozens of witnesses the prosecutor called for the trial against Uhuru Kenyatta are retiring because of the fear of their own safety. The prosecutor releases a third witness who is no longer useful.

Compensation is paid to Kenyans

Britain agrees to pay damages to over 5,200 Kenyans who were tortured in connection with the mau-mau uprising in the 1950s (see October 2012). A total of almost £ 20 million will be paid to the victims. British Foreign Minister William Hague also apologizes to the victims of the abuse.

MPs on both sides are voting at the end of the month to approve a sharp pay rise, with a salary equivalent to $ 10,000. The proposal goes through despite President Kenyatta urging members to agree on wage cuts to create room for new job-creating efforts.

Two police officers and three civilians are killed in an attack on a post in the border town of Liboi between Kenya and Somalia. al-Shabaab claims to be behind the attack

ICC is asked to prosecute

In a letter to the UN Security Council, Kenya’s ambassador appeals to the ICC to put down all charges against Kenyan officials for the violence after the 2007 election.

Eight people were shot dead in an attack on a hotel in the city of Garissa.

Kenyatta will take over as president on April 9.

On March 11, the ICC announces that the litigation against Francis Muthaura will be closed (see CC trials after the 2007 election). Kenyatta’s attorneys urge the ICC to also bring charges against him.
On March 30, the Supreme Court ruled that Kenyatta won the election. Odinga says he accepts the court’s ruling.

The election result is appealed

Odinga turns to court to appeal against the results of the presidential election, as he believes that everything has not gone right to

The election results are published

On March 9, the Election Commission announces that Kenyatta has won the election with 50.07 percent of the vote against 43.31 percent for Raila Odinga. Since Kenyatta received more than half of the vote, there will be no other ballot. The anniversary alliance also received the most votes in the elections to both the National Assembly and the Senate (for distribution of seats see fact box). However, Cord wins 23 of 47 governor posts, including in the three largest cities of Nairobi, Kisumu and Mombasa.

The result is delayed due to problems with the new and expensive electronic voting system. Up to 6 percent of the votes have been annulled for various reasons, about 300,000, but the number is significantly reduced when the voting is done manually.

Focus on security during elections

The election will be held as planned on March 4. About 100,000 police officers have been deployed to ensure voter safety. Unrest mainly occurs in the coastal province of the city of Garissa.

At least five people are shot to death in a restaurant in the town of Garissa in the east. The local police suspect that the Somali Islamist group al-Shabaab is behind the act.

New disturbances are reported from the Tana area (see December 2012) where at least ten people are killed in the violence between pokomo and the snake people.