One area where Japan is lagging behind other developed industrialized countries is gender equality, despite the fact that the Constitution prohibits gender discrimination. The position of women is traditionally weak and business and high social positions are dominated by men. In the family, women are usually financially dependent on the man, and the pay gap between men and women is greater than in comparable countries. However, slowly this is changing.

Traditionally, women have often become housewives when they get married. In households, wives have usually taken care of the household cash register, given their spouse weekly money and devoted a lot of time to children and the older generation. It is also the women who managed and placed much of the household savings in Japan. However, ingrained gender roles are slowly changing, as is the attitude towards marriage.

The fact that more and more women are working or obtaining higher education has affected marriages. The proportion of unmarried women in their 20-30s is increasing, and the average age of both men and women entering marriage has risen. Many are also waiting to have children, and the women are on average just over 30 when the first child is born. A major problem is also the difficulty in finding childcare that can be combined with a job. 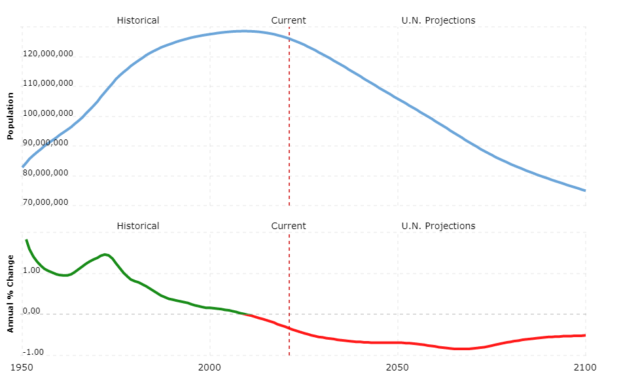 The state’s welfare system was not very developed in the past. Many had to rely on private health and pension insurance. Today, the social insurance system is expanded and includes both compulsory health insurance and national pension, child allowance, unemployment insurance and occupational injury insurance. The general insurance is supplemented by private, often more generous health insurance at the workplace. All citizens are insured through one of these schemes.

Since 1985, all citizens have been covered by a general pension system with retirement pension at the age of 65. The state accounts for one third of the basic pension and the rest comes from premiums paid by the retired self. Often, companies provide more favorable pension insurance for their employees for retirement already at 60 years. The national pensions paid are on average 40 percent of the final salary. In recent years, society’s pension costs have risen sharply as the proportion of elderly people in the population has increased.

The country’s rapid economic development has greatly affected old family patterns. In the past, three or more generations often lived together in families where parents had unquestioned authority. A married woman was expected to loyally obey her husband and in-laws. With new lifestyles, much of this has changed. Nuclear families with only children and parents or childless couples have become increasingly common, which has increased the number of households.

Another change is that child birth has declined, which has caused population growth to stop. On average, only one child is born per woman in Japan. One consequence of the ever-increasing average life expectancy and the disappearance of the large family is that the old people living alone are increasing.

The transformation of society and, in recent years, tighter economics have created social tensions with sometimes tragic consequences. The number of suicides has dropped in recent years but is still high. Many of them are considered to be rooted in financial problems or difficulties in meeting new, tough demands in a changing society. At the same time, sociologists say that more and more Japanese people, both men and women, are dissatisfied with how old gender roles still shape their lives.

The standard of living in Japan is high and nine out of ten Japanese people see themselves as middle class. Disposable income is still large and taxes are low. While the standard of living has risen sharply in just a few decades, the improvements are relatively evenly distributed. The difference between highest and lowest wages is smaller in Japan than in any of the world’s leading industrialized countries – at least on paper.

On the minus side there is the housing shortage. The dream of owning a house is being broken for most of the high house and land prices. In the rental market, apartments are usually small and rents are high. Problems finding a home near the workplace are forcing many Japanese to make long, tiring daily commuter trips.

Public expenditure on health care as a percentage of GDP: 10.9 percent (2015)

Nuclear power plan should be reviewed

The new government says it will review the plan for a gradual decommissioning of nuclear power proposed by the previous government. The Minister of Industry says that the now shut down reactors will be put back into operation if the Nuclear Authority considers them safe. Prime Minister Abe has promised bold measures to boost the Japanese economy.

The LDP government is approved

LDP wins a landslide victory in the House of Commons election on December 16. The party gets 294 seats and its alliance partner New Komeito gets 31 seats. For the DPJ government, things are going much worse; it only manages to retain 57 of its 230 seats in the last election.

Economic statistics show that the economy has re-entered a recession with shrinking growth during the year. The figures are released just a week before the parliamentary elections.

A stimulus package of measures aimed primarily at creating new job opportunities and providing support to small businesses is pushed through in Parliament.

Ichiro Ozawa is acquitted by a Tokyo appeals court from charges of violating campaign finance laws.

Minister of Justice Keishu Tanaka resigns only after a couple of weeks as Minister of Justice, officially due to failing health, but it has also been discovered that he has been in contact with crime syndicates many years ago.

Prime Minister Yoshihiko Noda receives a majority of the votes in a DPJ party leadership vote.

On September 26, opposition party LDP elected Shinzo Abe as its new leader. Abe was prime minister in 2006-2007 and is known as one of the more nationalist politicians in the party.

The infected conflict with China over the Senkaku archipelago (in China called Diaoyu), which received a new launch in August, escalates. After the Japanese government announced that it will buy three islands from a private Japanese owner, China responds by sending military ships to the archipelago and violent anti-Japanese demonstrations are held in Chinese cities. Japanese companies such as Canon and Panasonic shut down factories due to the unrest. There is concern about the economic impact the protests could have on Japanese companies and investors in China.

At the end of the month, Japanese government officials will meet representatives from North Korea in the first talks in four years.

In mid-August, 14 Chinese from Hong Kong, who joined the disputed archipelago Senkaku (Diaoyu in Chinese) (see Foreign Policy and Defense), are arrested for setting up a Chinese flag there.

The government calls the ambassador to South Korea in protest against the South Korean president visiting the island group Dokdo (called Takeshima in Japan), which is controlled by South Korea but also claims by Japan.

Nuclear accident could have been prevented

A parliamentary inquiry states that the disaster at the Fukushima nuclear power plant in March 2011 was caused and exacerbated by the human factor and cannot be considered merely a natural disaster. The nuclear accident could and should have been prevented and its effects could have been minimized through more effective response from the authorities and the company Tepco, which was responsible for the power plant’s operation, explains the investigation.

A faction of 49 MPs (37 from the lower house, 12 from the upper house) leaves the ruling DPJ. Even if the party retains its majority in the lower house, the drop-off will weaken DPJ’s influence. The leader of the dropped faction is Ichiro Ozawa, who a week later forms his own party. The reason for the dropout is stated to be the faction’s resistance to an increase in VAT. The new party gets the name People’s Life comes first (Kokumin no seikatsu ga daiichi) and becomes the third largest in Parliament’s lower house. Ozawa says he wants to work to reduce Japan’s dependence on nuclear power.

In early June, Prime Minister Noda replaces five government ministers in an attempt to get the opposition’s support for a VAT increase. At the end of the month, the lower house approves the government’s proposal to increase VAT from 5 percent to 10 percent within three years.

The last nuclear reactor is closed

Authorities are closing the last reactor at the Tomari nuclear plant at Hokkaido for routine inspection and maintenance. As a result, all nuclear reactors in Japan are at a standstill.

The government concludes an agreement with the United States on the much-debated Okinawa issue (see Foreign Policy and Defense); Thousands of US Marines are to be relocated from the island’s air base.

At the end of the month, powerful politician Ichiro Ozawa is cleared of charges of breaking political funding laws.

Three sentenced to death are executed. These are the first executions since 2010.

Economic statistics for 2011 show that Japan had a trade deficit for the first time in 30 years.