Despite weak economic growth over a longer period, the social indicators are relatively good. Jamaica invested early in building a welfare system for all residents.

Already in 1938 the minimum wage was introduced and in 1966 a social insurance system was established with old-age pensions, accident insurance and other benefits.

The economic crisis in the 1990s eroded the system, but later poverty decreased. Every tenth Jamaican was considered poor in 2007, the lowest figure to date. The international financial crisis that ensued subsequently doubled the proportion of poor people in a few years and it has remained high.

Since 2002, a system of cash grants has been co-financed by the World Bank. It is aimed at the poor and includes, among others, schoolchildren (see Education), elderly people without a pension, persons with disabilities, pregnant and new mothers. 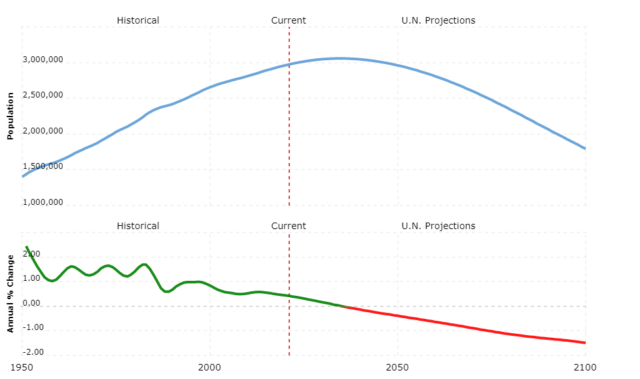 One of the biggest social problems is the great crime, not least in the capital Kingston (see Current policy). The link between crime and drugs is clear. Drug smuggling is widespread and drug abuse is widespread.

Violence and discrimination against women and girls is a serious problem. Laws against female violence are not widely applied. Women are discriminated against in working life and earn less than men. Only 11 out of 63 members of the lower house were women after the 2016 election.

Prostitution is prohibited by law, but it is still common among women and children, especially in tourist resorts. Trafficking in women and children for sexual exploitation also occurs. Sexual harassment is not illegal, both women and girls are often exposed. Children are subjected to both sexual and other physical abuse, and the number of police reports has increased.

Sexual acts between men are explicitly prohibited by a law of the 19th century and can give up to ten years in prison. Homophobia is widespread in society and LGBTQ people are subjected to extensive discrimination and harassment. A milestone on the road to increased acceptance was a pride parade held in Kingston 2015.

Abortion is only allowed if a woman’s life is in danger or if she risks health problems. Illegal abortions are common and contribute to high maternal mortality.

The health care is mainly state. Since 2008, all state care has been free of charge, except at a university hospital. Medicines are subsidized by the state, but there is a constant shortage of medicines and healthcare is not always enough.

Proportion of population with access to clean water: 92.9 percent (2015)

Proportion of the population having access to toilets: 87.3 percent (2017)