Before the war against Iran broke out in 1980, Iraq had one of the Middle East’s most elaborate welfare systems. There were pensions and other social benefits for employees in the public sector, industry and commerce. The health care was free of charge and held a high quality for the region.

Since then, social conditions have greatly deteriorated for the Iraqis. The Kuwait War of 1990-1991 and the subsequent UN sanctions created a food and health disaster in the country. In 1998, the Iraqi Ministry of Health claimed that at least 1.5 million Iraqis, most of them children, had died from illness and malnutrition as a result of the sanctions. Until 1996, basic food was rationed to about half the daily need. The social safety nets largely stopped working. The result was growing social problems such as crime, smuggling, prostitution and begging. The conflicts that have shaken the country since 2003 have continued to adversely affect the country’s social conditions. Life expectancy dropped from 71 years at the end of the 1990s to 69 in 2012.

The country’s large oil revenues during the 1990s have not had a major impact in the population, although poverty problems have decreased somewhat. In 2010, the Baghdad government launched a poverty reduction program, which was reported to comprise 23 percent of Iraqis. Poverty is not evenly distributed in the country. 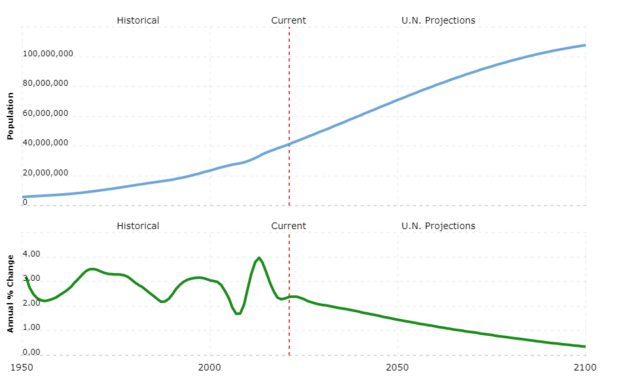 The lack of clean water was another major threat to public health during the years of sanctions. The chlorine for water purification was not allowed to be imported as it was considered to be usable in the manufacture of prohibited weapons. Even today many problems remain. In 2010, the World Bank announced that fewer than seven out of ten Iraqis outside Baghdad had access to potable water and that every fourth household in the capital lacked access to municipal water. Outside of Baghdad, fewer than one in ten households are connected to the drainage systems.

Yet in 2005, one-sixth of households suffered from food shortages and hunger according to the UN. Millions of people, mainly children, were estimated to be chronically malnourished. The situation improved in 2008; then 3 percent of households were threatened by starvation. Nine out of ten Iraqis had access to free food rations from the government that year. The situation worsened again in 2014 due to the large refugee flows triggered by the fighting between the government, the Kurdish forces and the Islamic State.

The upgrading of health care after the 2003 US-led invasion has been slow, and the medical profession became the target in the violence that followed in the years following the invasion. The Iraqi Medical Association stated in 2007 that almost 75 percent of all doctors, nurses and pharmacists had abandoned their workplaces. More than half of them had moved abroad. Diseases that have increased in scope include diarrhea, diphtheria and typhoid fever. Around 70 percent of all children who died in 2006 – in addition to daily violence – suffered from relatively easily treated diseases such as diarrhea and pneumonia.

A particular problem is all the mines that have remained in the terrain after the war. Most were laid out during the Iraq-Iran war or other conflicts a long time ago. More than 4,000 cities and villages had problems with landmines in 2013, according to the UN agency Unicef. One million children are believed to live in an environment where land mines exist.

Two thirds of Iraqis live in urban areas, one third in rural areas.

No proper censuses have been made since 1997. The issue is controversial as the different religious and political groups have different views on the composition of the country. Particularly sensitive is the issue of the majority of people in the disputed areas between the Kurdish authorities in the north and the central government in Baghdad.

Arabs, Kurds and other groups in society now live more geographically separated than before 2003. Within each group there are large gaps between rich and poor. For those who are part of the elite, or who want to try to climb there, it is crucial to have the support of relatives or friends in the government or ministries in Baghdad or in the provinces. Without high-level contacts, it can be difficult to get a coveted job or start a business.

Religion plays a major political role. Among Shi’ite Arabs, the religious leaders, whose higher ranks are called Ayatollahs, are also very important as political leaders. This is also true among religious minorities such as the Christian churches and Yazidis, as well as among Sunni Muslims, although there is no such clear hierarchy among the religious leaders in Sunni Islam.

The educated, urban middle class has experienced difficult years since 2003 and many of that group, mainly Sunni Arabs, have moved away from the cities from the violence. At the same time, the proportion of poor and unemployed in the cities has grown. A new wave of refugees took off in 2014, when IS spread. According to the UN, by mid-2014, around 1.9 million Iraqis had been displaced from their homes as a result of the war. In Iraq, there are also small groups of Palestinian refugees who have been hit hard by the war since 2003, as they are often associated with Saddam Hussein’s fallen regime. Since 2011, refugees have also arrived from Syria. In December 2017, the UN refugee agency UNHCR estimated that there were nearly 250,000 Syrian refugees in Iraq, many of them Syrian Kurds who have taken refuge in northern Iraq. Just in Northern Iraq has received a very large proportion of internal refugees,

Iraq is very much a clan society, although it differs between different parts of the country and between city and country. Traditional Sheikhs and other leaders have the decisive influence in their home areas, which can be large areas. Some clans have joined some of the political parties and thus expanded the social networks.

Alongside the larger sound community, the large family, often with several generations living together, is the basis of community life. The typical family includes a married couple, their sons with wives and children, and unmarried daughters. Other relatives may also be included in the group. Traditionally, it is the oldest man who makes the decisions about real estate and possible land, as well as about the young people’s education, work and marriage. The women in the house are often jointly responsible for the household and care of the children. The older woman has the right to decide on the wives and children of her sons.

It is not uncommon now that younger couples in the cities have their own households – if they have advice and opportunity; The housing shortage is great – but they can still be part of the big family when it comes to family and community decisions.

In the extended family it is central to preserve the family unit. The needs and interests of the family go before the will of the individual. The elderly guard the younger, the men guard the women, and the one who “shamed” the family can be severely punished. Honor-related violence, including murder, is not uncommon. This has been particularly noted in the Kurdish region, despite the authorities trying to stop it.

When parents make decisions about their children’s marriage partners, they are happy to choose a cousin or other relative who is considered to have both social and economic benefits. Many educated in the cities find themselves a partner, but formally still require permission from the parents.

According to Muslim family law (Sharia), it is easy for men to apply for divorce but almost impossible for a woman. A man is to inherit twice as much as a woman, which is justified by the fact that the husband will in future have a livelihood, while the woman is taken care of by male relatives and later by her husband (see also Political system).

Iraq has major gender equality problems, as a result of both poverty problems and a widespread, strongly conservative view of gender roles and women’s position in society. Women have very little political and economic influence. More than two out of five men have upper secondary education (or higher), while this only applies to one in five women. Women are quoted in the parliamentary elections, which means that a quarter of the seats are currently held by women. Very few women have their own work and income (see Labor Market). There are feminist groups that fight for women’s equal rights, but they work in the headwinds.

Iraq is a very young country. Two out of five Iraqis are under 15 and population growth is high, which puts great pressure on the education system and the labor and housing market. However, family sizes in Iraq have dropped, as are most countries in the region, but the numbers are still relatively high. In 1970, an average Iraqi woman gave birth to 7.4 children. In 2010, that figure was down to 4.2 children per woman.

The constitution guarantees the rights of the children, but in practice the tradition weighs heavier. Marriages with minors (under the age of 18) occur and Islamist groups, especially Shi’ites, have been campaigning to remove the lowest permissible marriage age. It happens that children leave school early – or never start school – to work instead, even though children under 14 are only allowed to work in small family businesses.

Gay acts are not mentioned directly in the constitution, but since the law must follow the values ​​of Islam, there is a great risk of discrimination on the basis of sexual orientation. The view of homosexuality is strongly negative within the Iraqi public. Since 2003, Islamist groups have attacked, harassed and murdered gay Iraqis, mainly gay men. Attacks have also been directed at young people accused of homosexuality, atheism and the like, for no other reason than to have adopted Western popular culture and fashion.

Proportion of population with access to clean water: 86.1 percent (2015)

Proportion of the population having access to toilets: 94.1 percent (2017)

Public expenditure on health care as a percentage of GDP: 3.4 percent (2015)

Approves a security agreement between Iraq and the United States on an upcoming US retreat from Iraq; The Washington government is forced to back down at some point, most notably about having military bases in Iraq. According to the agreement, the US combatants must have been withdrawn from all Iraqi cities by the end of 2009 and have left Iraq completely by the end of 2011.

The US-led military is formally handing over control of the Anbar province in the west to the Iraqi government. The US military now has the highest command over only five of Iraq’s 18 provinces, including Baghdad.