Overpopulation, widespread poverty, violence, lack of work and natural disasters have resulted in more than one in eight Haitians (mainly the well-educated) being abroad – most in the United States, Canada and countries in the Caribbean, especially the Dominican Republic.

Although small improvements in living standards can be seen during the 2010s, these have come from a very low level. According to the UN Social Development Index, Haiti ranked 168th among 189 countries in 2017. A large proportion of the population lack access to clean drinking water and only one in four Haitians have access to a proper toilet. About 60 percent of residents, most in rural areas, lack primary care. Around seven in a hundred children die before the age of five, most in Latin America. One reason is that just over half of children are vaccinated against measles before the age of one, compared to over 90 percent in most other Latin American countries.

Through relief efforts, diseases such as malaria, tuberculosis and measles have declined, but Haiti has the highest proportion of AIDS patients among the countries of the Caribbean. About 150,000 adult Haitians were estimated to live with HIV / AIDS in 2016, while 4,600 the same year died of the disease, which has made almost 90,000 children orphans. In the wake of the severe earthquake in 2010, a cholera epidemic also arose, the origin of which was UN soldiers (see Modern History). The cholera epidemic also regained momentum after Hurricane Matthew in the fall of 2016. Nearly one million people are estimated to have been infected with cholera since the outbreak of the epidemic and more than 10,000 have died in the disease. The Zika virus has also taken root in Haiti. 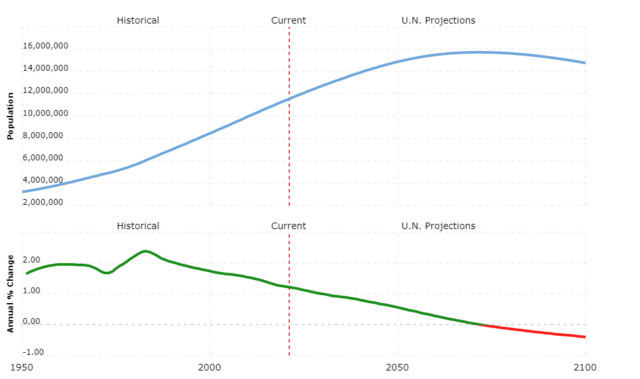 For state and private employees there is a defective social insurance system, and at least on the paper, farm workers have accident insurance. The social contributions made by NGOs are of greater importance.

After all, a first assessment of the country’s poverty after the earthquake disaster showed little signs of a clearing. In the report presented by the World Bank and the Haitian organization Onpes at the end of 2014, extreme poverty was reported to have dropped from 31 to 24 percent between 2000 and 2012, mainly due to better education. In addition, the report points to better paid jobs in the construction, transport and telecommunications sectors, especially in Port-au-Prince, as well as foreign aid and money shipments from Haitians abroad. But close to 60 percent of residents were below the national poverty line of US $ 2.44 per day in 2016, while almost a quarter were below the extreme poverty threshold of US $ 1.24 a day.

The devastation after the 2010 earthquake also led to an extensive wave of refugees within Haiti. At most there were 1.5 million internally displaced persons, at the beginning of 2018, almost 40,000 remained.

After the 2010 earthquake, children’s vulnerability became the focus. Thousands of children became orphans or moved away from their families and were in urgent need of both medical help and psychological support. There were also reports, partly possibly based on rumors, of how children were adopted to other countries without proper judicial review.

But already in the past, the children’s situation in Haiti was difficult and several hundred thousand children are estimated to have been used for housework under almost slave-like conditions. Not infrequently, they have been subjected to both physical abuse and sexual abuse. Children who are thrown out or escaped from households where they have been housed make up a large proportion of street children who usually end up in prostitution or crime.

Thousands of adult Haitians also fall victim to human trafficking, usually following promises to get good jobs or study places in other countries.

Homosexuality has been allowed by law since 1986 for people over the age of 18, but the tolerance among the public is small and most LGBTQ people are believed to maintain a low profile of fear of harassment.

Haiti is one of a handful of countries in the world where abortion is totally prohibited, even if the mother’s life or health is at stake.

Proportion of population with access to clean water: 64.2 percent (2015)

Proportion of the population having access to toilets: 34.7 percent (2017)

Proportion of women in parliament: 3 percent (2018)

The Senate replaces the head of government

Prime Minister Pierre-Louis is dismissed by the Senate who believes she has not done enough to rebuild the country’s economy. Jean-Max Bellerive is appointed as successor.

The World Bank and the IMF donate 1.2 billion of Haiti’s debt, or 80 percent of the total debt. The country is considered to have met the conditions for economic reform and poverty reduction.

The election that applies to one-third of the Senate’s seats takes place between April and June, after being postponed since November 2008. Only eleven percent of voters participate, and unrest erupts. Most Senator seats receive the Lespwa government party, which after the election changes its name to Inite.

The electoral authority disqualifies all candidates from the ousted President Jean-Bertrand Aristide’s Fanmi Lavalas party before an election involving parts of the Senate. The reason is that Fanmi Lavalas has split and handed in rival ballots and it is unclear which faction is the legitimate one.