Ordinary Guineans, unlike the small elite that have been able to enrich themselves, have not been part of the improvements in the economy that have taken place since the beginning of the 2010s. In 2018, Guinea was one of the 15 countries at the bottom of the UNDP Development Index, which takes into account such things as income, literacy, average life expectancy and child mortality.

The Ebola epidemic in Guinea between 2013 and 2016 hit the population hard. More than 2,500 people died in the disease, cutting off 3,800 who had been infected. Many smallholder farmers and others in the informal sector lost their income when trade with neighboring countries ceased when borders were closed to prevent the spread of infection. At the same time, the number of deaths in other diseases, especially malaria, also increased when people did not dare to seek care for fear of being infected by Ebola.

Health care has major shortcomings, especially outside the cities. Private care is available for those who can pay. Every fifth child under five is malnourished and child mortality is high: in 2018, more than 100 children out of 1000 died before the age of five, which was nevertheless a clear reduction compared to the 1960s when about every third child died before the age of five. Dirty water and diseases such as malaria, tuberculosis, polio and cholera contribute to this. However, the proportion of children who are vaccinated against diseases such as measles and polio has increased in recent years. Many women also die during childbirth. 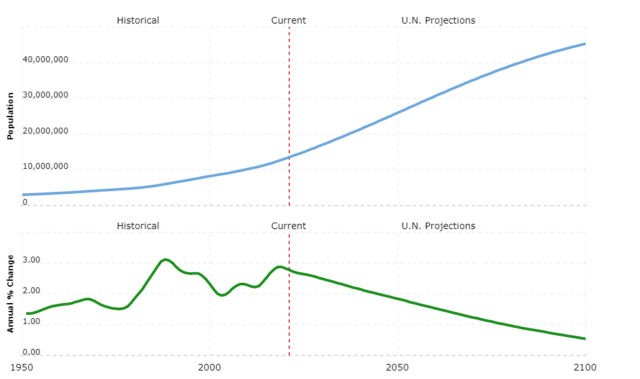 The HIV and AIDS epidemic has hit Guinea less severely than some other African countries: about 120,000 people were estimated to be infected in 2016. Being affected by the disease is considered disgraceful and it is common for women whose men have died of AIDS to be abandoned by their families.

There is a social insurance system with, among other things, pensions and disability, sickness and occupational injury insurance. However, this safety net covers only those who are employed.

Women are generally in a worse position than men in Guinea. Although the law prescribes equal pay for equal work, women usually earn less than men. In litigation and in inheritance, women are usually disadvantaged.

Polygamy occurs in all parts of the country and in all classes of society. Nearly two-thirds of women get married before they turn 18, some as young as 11. But it has become more common for girls to stay in their parents’ homes until they have graduated from high school.

Women gained voting rights in 1958. In the government that took office in 2016, seven of 31 ministers were women (just over 22 percent).

Violence against women is common. The number of rapes has increased in recent years, but few reports are made and hardly anyone is convicted of these crimes. Especially vulnerable are girls between 11 and 15 years.

Sexual mutilation of girls is formally prohibited but is still common, especially in rural areas. Several local organizations, one of which is called Tostan, are working to abolish the custom. Among the more educated groups in the cities, only a symbolic intervention is made.

It is also common for young women to get married early, despite the fact that a new law was passed in 2016 which states that no one can get married before the age of 18. Forced marriages are also common.

A new law allowing polygamy was passed in 2019, despite opposition from President Alpha Condé. Many others also opposed the change in laws that they feared would violate women’s rights. The original bill was amended so that a man who wants to marry several women must get his wife’s permission to do so. Up to now, polygamy has been formally punishable and able to provide imprisonment for between five and ten years.

Child abuse is common. There are no children in schools or in homes.

Child labor occurs extensively, especially in agriculture and the so-called informal sector. There are also some street children, but no one really knows how many, who are often forced to beg outside mosques and markets.

There is also trafficking in women and children, primarily in the country but also to other parts of West Africa and to Europe. The boys who are affected are often forced to work in mines, while women and children are exploited in the sex industry, in other West African countries, Europe and the Middle East.

Homosexuality is prohibited by law, both for men and women, and can be punishable by a fine or imprisonment for up to three years. Formal prosecutions are unusual, but there are reports of harassment and violence against homosexuals.

Proportion of population with access to clean water: 67.4 percent (2015)

Proportion of the population having access to toilets: 22.7 percent (2017)

Public expenditure on health care as a percentage of GDP: 4.5 percent (2015)

The report of the UN Commission investigating the massacre leaked to the media in December. It states that the junta leader Camara, Abubakar “Toumba” Diakité and the head of the country’s anti-drug force Moussa Thegboro Camara have direct responsibility for the massacre in September. It confirms data from human rights organizations that there have been at least 109 cases of rape. According to the report, women have also been mutilated and kidnapped and subjected to new rapes. Hundreds of people have been tortured.

Government power is temporarily taken over by Colonel Sékouba Konaté.

In early December, Camara was shot after being shot by a close associate, Aboubacar “Toumba” Diakité, in what the regime describes as a coup attempt. Camara is brought to Morocco for care. Diakité is on the run and over 60 people connected to him are arrested.

Food prices are rising rapidly in Conakry, in just a few weeks many basic commodities have become 15-40 percent more expensive.

At the end of the month, the EU faces an arms embargo on Guinea and sanctions on some 40 individuals, including Camara. The US, Ecowas and AU also sanction the junta.

Juntan announces that Guinea has signed an agreement with a Chinese company. This is given the right to exploit natural resources in exchange for the cost of several infrastructure projects (see also Finance).

Commission is appointed to investigate the massacre

Juntan decides to appoint a commission to investigate the shooting deaths in October. However, the opposition refuses to participate. The unions are announcing a general strike until October 12 and 13 to honor those killed. According to a report by Human Rights Watch , most of the victims belong to the Fulani group.

At the end of the month, 50,000 people will gather in Conakry to protest against Camara’s coup leader, since he has hinted that he intends to run for president. According to human rights organizations, at least 157 people are killed and over 1,000 injured when the military shoots straight in at the protesters. According to the authorities, 57 fatalities are required (most of which must have been trampled to death), and information is also denied that soldiers must have raped and abused female protesters.

At the same time, reports come of soldiers plundering shops and homes, shooting at all who venture out into the capital. The massacre is condemned internationally. France cancels all military cooperation with Guinea. Opposition leaders said former rebels from the Liberian militia group Ulimo participated in the shooting deaths.

In April, two army officers arrested are accused of planning a new coup. Junta leader Camara, who is on her way to Libya, cancels her trip.

Former ministers are accused of embezzlement

On March 23, three former Ministers of Conté’s government, including former Prime Minister Ahmed Tidiane Souaré, are arrested and charged with embezzlement of more than $ 5 million in state funds.

In February, former President Ousmane Conté’s son and several high-ranking police officers were arrested and charged with being involved in cocaine smuggling between Latin America and Europe via Guinea. At the same time, information that the junta leader Camara has been subjected to a murder trial will be reported, and there is a reported dissatisfaction among soldiers who have not been promoted in connection with the 2008 coup.

On January 15, the junta appoints a new government that was largely made up of military and professionals. The military retains control, among other things, of the defense, the finances and the judiciary. However, responsibility for the mining sector goes to a civilian minister.

Guinea is not allowed to attend meetings of a cooperative organization

At the beginning of the year, the Ecowas Regional Cooperation Organization announces that Guinea may not participate in any of its meetings for the time being.

The US stops aid

The United States stops most of its aid to the country.