Few countries have such an uneven distribution of income as Guatemala. Although it is considered a middle-income country, a large proportion of the population lives in deep poverty due to the oblique distribution of resources. Half of all children under five are chronically malnourished, the largest proportion in all of Latin America and the sixth highest figure in the world.

Particularly miserable are the conditions in the countryside where the indigenous peoples dominate. Among them, around three out of four children suffer from five years of chronic malnutrition. They often manage on a nutritious diet consisting mostly of tortillas (corn bread). Many are hampered in their development, are short of their age and suffer permanent damage from nutritional deficiencies.

Poor nutrition and hygiene also cause illness. Diarrhea is a common cause of death, as are complications associated with pregnancy and childbirth. Infant mortality is high. 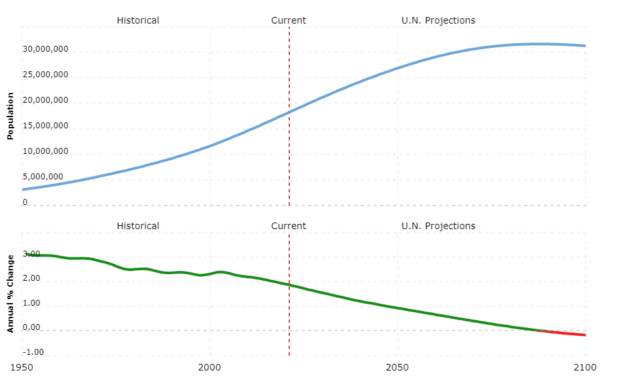 The proportion of poor people in the population decreased over a number of years in the 2000s, but the trend then reversed. Nearly 60 percent of the population is estimated to live in poverty today. Almost one in four people live in extreme poverty – a higher proportion than 1989.

Health care is poor and access to care is much worse in rural areas than in cities. The UN Population Fund estimates that only about a third of married women use modern contraceptives. Only half of the women who give birth receive help from trained health care professionals, in the countryside most give birth at home. The state’s health care budget is one of the slimmest in all of Latin America. Since 1947, there is a compulsory social security system, but in practice it will rarely be the most needy because most work in the informal sector and do not have access to the systems.

The woman’s position is weak in politics, in the labor market and also in homes where abuse is common. An increasing number of women report abuse, but the dark figures are considered to be large. Sexual harassment is common in workplaces and is not prohibited by law. The proportion of teenage pregnancies in Guatemala is among the highest in Latin America, and they are often the result of rape. Abortion is not allowed unless the mother’s life is at stake.

Although the government has allocated a number of resources, including special police stations and courts, to deal with the violence against women, it is widespread and rarely leads to prosecution. In Latin America, the term femicide is used to murder women just because they are women. These murders are characterized by brutality and hatred of women, and are very common in Guatemala.

It is not illegal to be gay, but same-sex marriage or partnership is not allowed. LGBTQ people are discriminated against in various ways, including when it comes to access to health care and education. Hate crimes, such as murder due to the victim’s sexual orientation, are not uncommon. Especially vulnerable are female transgender people.

Proportion of population with access to clean water: 93.6 percent (2015)

Proportion of the population having access to toilets: 65.1 percent (2017)

Public expenditure on health care as a percentage of GDP: 5.7 percent (2015)

In the pure declaration of war against the political establishment, Cicig chief Iván Velásquez says that the UN Commission will now concentrate its work on investigating the involvement of organized crime in politics and on the funding of political parties. The link between politicians and shady business interests has long been identified as a problem in Guatemala.

The Minister of Finance resigns

Finance Minister Pavel Centeno leaves his post following harsh criticism from business representatives against the tax reform that he largely behind (see February 2012). It is hoped that Centeno’s resignation will help to alleviate congressional work that worsened during the year. Pérez Molina’s party PP has only 57 of the 158 mandates and is dependent on support from other parties to pass legislative proposals. The business lobby Cacif has tried to get different parts of the tax reform declared unconstitutional, but only succeeded in a few cases.

Drug king Eduardo Villatoro Cano, one of Guatemala’s most wanted men, is arrested in Mexico and handed over to the Guatemalan police. Cano and his gang are charged with a robbery that claimed the lives of eight police officers in June 2013. A ninth police officer was abducted.

President Pérez Molina announces that the UN has appointed Colombian lawyer Iván Velásquez as new head of Cicig. The President makes clear that Velásquez’s main task is to ensure that the UN-supported Commission can hand over the investigative work to the Guatemalan judiciary when Cicig’s term expires in September 2015. The Costa Rican Dall’Anese is reported to leave the post of Cicig because of contradictions with the country’s economic and political elite – not unlike its predecessor (see June 2010).

Genocide verdict is torn down

The Constitutional Court raises the ten-day-old genocide verdict against former dictator Efraín Ríos Montt. The district court decides that the trial must go back to the point it found on April 19, the day a dispute arose between two judges over who would hear the case. The decision is the result of an appeal from Ríos Montt’s defense lawyers.

A tribunal with three judges sentenced Efraín Ríos Montt to 80 years in prison for genocide and crimes against humanity. The judgment specifically concerns 1,771 persons belonging to the Mayan people ixil, as well as the displacement of 29,000 people and several cases of sexual coercion and torture, during the years 1982-1983. During the trial, many people testified about brutal abuse. According to the judgment, ixil was regarded as the state’s enemies and a lower standing people. Many relatives of the victims and leaders of indigenous people rejoice when the judgment is proclaimed. It is the first time a former head of state has been convicted of genocide in his own country. Former military intelligence chief Mauricio Rodríguez Sánchez, charged with Ríos Montt, on the other hand, is acquitted.

Ex-President is extradited to the United States

Former President Alfonso Portillo is extradited to the United States where he is charged with money laundering. Just before that, an appellate court in Guatemala has upheld the acquittal, which means that he is no longer a criminal offender in his home country (see May 2011).

Violence in connection with mining protests

The government faces a state of emergency in San Rafael Las Flores and three other cities in the southeast following clashes between police and people protesting plans to open a silver mine. A police officer and a demonstrator have been shot dead and several protesters have been injured. The protesters have also kidnapped 23 police officers. The UN High Commissioner for Human Rights expresses concern about the violence surrounding the mines.

Historical trial against the dictator

The trial begins against the now 86-year-old former dictator Efraín Ríos Montt, who has been in house arrest for a year (see January 2012). According to UN Commissioner for Human Rights Navi Pillay, the trial is historic: it is the first time a former head of state has been tried in a national court in his own country for crimes such as genocide and crimes against humanity.

In a speech to the nation, President Pérez Molina says that a “historic reduction” of the violence occurred during his first year in power. In 2012, almost 5,200 murders were recorded, a decrease of 10 percent. The number of kidnappings decreased by 33 percent and many criminal gangs were dissolved according to the president.