Figures relating to social conditions and public health show that Ghana is a poor country, but the situation has improved in many respects. The country managed to meet the UN’s so-called Millennium Development Goals by halving poverty by 2015. Almost a quarter of Ghanaians were considered living in poverty in 2014, compared to over half in 1992.

In the big cities, there is a group of Western-influenced and well-educated Ghanaians, while poverty prevails in many of the suburbs. A large proportion of rural residents are also poor, especially in the north. The Norwegians often have poorer education and are usually content with low status jobs when they move south. The savannah region in the north has largely been outside economic development. It is estimated that over half of Ghana’s poor live in the savannah region, although it only houses about a quarter of the country’s population.

Child mortality has decreased and life expectancy has increased. Almost all children are vaccinated against diphtheria, polio and tetanus. Child mortality is mainly due to preventable diseases and dirty water. Nearly nine out of ten residents had access to clean water in 2012. 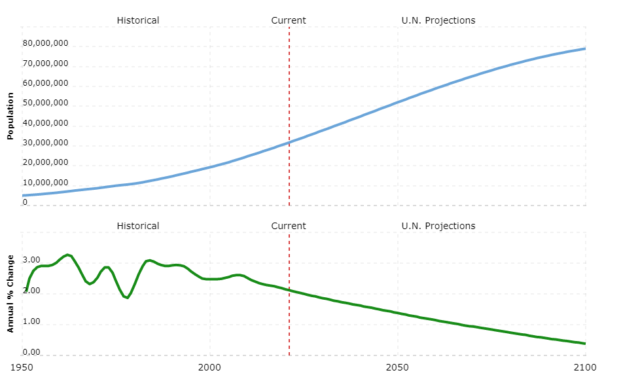 Health care is lacking in resources, even though government grants have increased since the 1990s. In 2003, a decision was made to introduce national health insurance, while a large proportion of the population lacked access to health care. Many newly trained doctors and nurses apply abroad, mainly to the UK, where they earn far more and receive regular pay.

The clan is the base of society

The AIDS epidemic in Ghana has not assumed the same proportions as in southern Africa, and the situation is considered to be under control. In 2013, 1.3 percent of the adult population (15-49 years) was estimated to be HIV infected.

The big family (clan) forms the basis of society. The land is owned by the clans and society is ruled by a chieftain, whose position is inherited and whose family constitutes a kind of upper class.

Gender discrimination is prohibited. In the cities, there are well-educated women in important positions in government and business. Among ashanti and other Akan people, the lineage is matrilinear, that is, the lineage of the mother weighs heavier than the ancestor. This should not be confused with matriarchy, which means that it is the women who decide, but it can still give women an esteemed position in certain contexts.

At the same time, the demands on women are tough, and customs and social patterns mean that women are still inferior to men. In rural areas, women often do not have the right to own land or inherit assets. One custom that human rights groups want to prohibit, partly because it can increase the risk of HIV infection, is that in some cases a widow can claim to marry a sister to his deceased wife.

Beliefs about witches still exist in some quarters, and it happens that women as polling places as witches are expelled from the villages and forced to live in special places where forced labor occurs. The trocosis system, which means that young girls are given away as slaves to the local temple to atone for crimes committed by someone within the family, are still alive.

Children are sold for forced labor

Female genital mutilation has been banned since 1994. Through information campaigns, the authorities are trying to stop the phenomenon, and several prison sentences have been awarded for violating the law. Between 10 and 30 percent of women are believed to be sexually abused, mainly in Northern Ghana.

Abortion is permitted in certain circumstances, but the rules are strict, and especially poor women are therefore often forced into illegal abortion. Some aid organizations work to give people access to contraceptives, and to help vulnerable women get medically safe abortions by breaking existing laws.

The notion that children are the property of the local community or family makes it acceptable for parents to give a child away to a neighbor or relative. A degeneracy of this system has led poor parents to sell children to forced labor in some cases. In 2005, a law was passed prohibiting this.

Homosexuality is illegal and not accepted by large sections of the population. British Prime Minister David Cameron threatened in 2011 with reduced aid to countries that punish homosexuals. Ghana’s then evangelical Christian president John Atta Mills, however, declared that he would never agree to legalize homosexuality.

Proportion of population with access to clean water: 77.8 percent (2015)

Proportion of the population having access to toilets: 18.5 percent (2017)