Germany has a well-developed social insurance system, so generous that it has become a heavy burden for the state. As the working population declines while retirees grow, a number of changes have taken place.

The German social insurance system dates back to the end of the 19th century, when health and accident insurance was first introduced. Today, the general system includes unemployment, accidents at work, health care, the elderly and pensions. For each area there are special autonomous insurance funds that include all employees and to which they allocate a certain proportion of their salary. Employers also make payments to the funds. The insurance system is compulsory, but high-income earners are entitled to take out their own private health insurance instead of the state. The state health insurance includes doctor visits, hospital stays, medicine and dental care.

Health care is of good quality and access to nurses and doctors is high, not least because the proportion of doctors with a foreign background has increased in recent years. 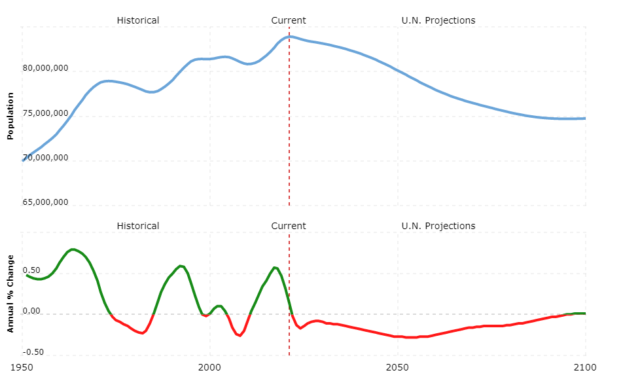 The retirement age is now 65 years, but it should gradually be increased to 67 years by 2029, as a way to adapt the system to the proportion of older people in the population. Germany is projected to spend the equivalent of 12.5 percent of GDP on pensions in 2050. The amount paid to an average-wage earner is expected to be lower than today, despite the increase in pension payments in recent years. In 2015, however, the level of pension payments was slightly lowered. The proportion of elderly people who are still working has increased in the 2010s, hoping to facilitate the financing of the pension system. From 2014, new rules were introduced that allow those who have worked for 45 years to retire already at the age of 63. However, this only applies to those born before 1953.

Germany is lagging behind compared to many other Western countries in terms of women’s participation in the labor market. Although almost three-quarters of women of working age gain employment, the proportion of part-time workers is 37 percent, compared with the average in the OECD countries of 22 percent. In addition, Germany is one of the countries in Europe that has the largest income gap between women and men: women earn an average of 22 percent less than men. Since 2016, at least one-third of the board members of listed companies must be women.

Parents can take child leave according to the Swedish model since 2007. Parental allowance, which corresponds to about two-thirds of the net salary up to a ceiling, is paid for 12 months to a parent or for 14 months if the father takes at least two months of parental leave. Since 2015, it is also possible to be parental leave at half-time for 28 months.

Germany was long one of the few Western European countries that did not allow same-sex marriage, but in the summer of 2017, the Bundestag passed a new law that approved this.

Proportion of the population having access to toilets: 99.2 percent (2017)

Public expenditure on health care as a percentage of GDP: 11.2 percent (2015)

Germany is involved in the fight against IS

The Bundestag voted in favor of Germany taking part in the fight against IS in response to France’s plea for help after the terrorist attack on November 13. The German operation includes six Tornado fighter aircraft to be used for surveillance as well as military personnel (1,200 people). No bombing will be carried out by Germany. The first aircraft and troops will be sent to Turkey on December 10th. The left-wing parliamentarians vote against the initiative, partly because it is considered ill-prepared.

A friendly match between Holland and Germany that was to be held in Hannover is canceled after credible information has been received about a bomb threat, just days after 129 people died in the terrorist attacks in Paris.

Tensions between Austria and Germany

The German government criticizes the Austrian for allowing refugees to cross the border into German Bavaria.

The leaders of the three government parties meet to try to agree on a common refugee policy, after CSU leader Horst Seefhofer threatened with severe consequences unless the government does nothing to limit the flow of refugees in the country. Most refugees enter the country via Austria and further into Bavaria. A few days later, the government coalition agreed to speed up the handling of asylum applications. In addition, refugees should be sorted at the border based on their strong asylum reasons. Three to five new migrant camps will be formed where migrants who are not regular political refugees will be sent, many of whom will be sent back after three weeks. A few days later, Angela Merkel announces that asylum-seeking refugees must expect that it may take a long time for their families to follow suit.

At the end of the month, German police report that refugee admissions in the country are subject to an increasing number of assaults. A candidate for the mayor’s post in Cologne has recently been stabbed in the neck, probably as a result of her work for refugees. In July-September alone, 285 attacks were made against refugee facilities, which was more than during the entire 2014 when the number was 198. In addition, 576 different crimes against refugee housing had taken place since the beginning of 2015.

Rules for intelligence cooperation are tightened

An investigation commissioned by the government comes with its report showing that there has been too close cooperation between the German intelligence service BND and the US intelligence organization NSA. However, there is no evidence that BND would have assisted the NSA in spying on Germans and Europeans, as has been claimed from various quarters earlier in 2015. BND has in many cases, on its own, been systematically spying on allies in different parts of the world.

Try to reduce the refugee stream

Among other things, the German government restricts the right to obtain asylum for those who come from Albania, Montenegro and Kosovo, and those asylum-seekers who have refused their applications should be rejected more quickly. Towards the end of the month, the coalition’s disagreement is growing as to how the crisis should be handled. While Merkel and the CDU want the country to open the doors to refugees, Christian Democrats in Bavaria, CSU, and their leader Horst Seehofer want to see a more restrictive policy.

US Environmental Protection Agency EPA announces that German Volkswagen, Europe’s largest car manufacturer, has manipulated its emission systems to make it look as if the cars have less emissions than they actually have in tests. Several diesel-powered variants of different car models are affected, a total of about 11 million cars worldwide. Volkswagen’s share prices fall by over a third. Later in the fall, it appears that gasoline-powered cars have also been tampered with and that a total of 800,000 cars may be affected.

The boundaries are opened

Germany, together with Austria and Hungary at the beginning of the month, decide to temporarily open the borders so that the tens of thousands of migrants who have arrived in Hungary in the recent past can move on to Germany, where many want to seek asylum. Many of the refugees are Syrians. Merkel also promises to allocate an additional EUR 6 billion for asylum reception, of which a large part of the money will go to states and municipalities. Tens of thousands of refugees come by train to Munich, where they are transported to the rest of Germany. At the same time, the German government demands that the EU introduce a quota system for asylum reception. After two weeks, the German government temporarily introduces passport and visa checks at the borders with Austria, the Czech Republic and Poland. The influx of migrants can thus be limited in an attempt to maintain security and order, according to the government.

A record number of refugees

Calculations from the Ministry of the Interior show that the number of asylum seekers in 2015 could reach as many as 800,000. Earlier in the year, the forecast was around 450,000. Most asylum seekers come from Syria, but also from the Balkans and Africa, the number of migrants has increased. At the same time, the German government announces that refugees from Syria will be allowed to seek asylum in the country, although it is not the first country they have come to within the EU. The system of sending back refugees who have already been registered or applied for asylum in another EU country in accordance with the Dublin Regulation has become too heavy and does not work, they say.

A majority of the members of the Bundestag voted yes to the third rescue package for Greece. Some 60 members of Angela Merkel’s conservative bloc had warned that they did not intend to support the package.

The prosecutor is kicked

Attorney General Harald Range’s decision to investigate whether the blog Netzpolitik.org published secretly stamped information on German Internet surveillance leads to widespread protests from politicians and journalists. The judicial inquiry is seen by many as a way of trying to stop journalists’ scrutiny and as a blow to freedom of the press. The storm of protest leads to the government publicly renouncing the legal investigation. The State Prosecutor contests criticizing Justice Minister Heiko Maas for jeopardizing the judiciary’s independent position. Justice Minister then announces that he no longer has confidence in Range getting fired.

The Bundestag votes to start negotiations on a third rescue package for Greece, which is struggling to stay within the euro zone (see Greece, calendar).

The State Prosecutor announces that the investigation of the US intelligence organization NSA’s suspected interception of Angela Merkel’s cellphone is ending. The reason stated is the lack of evidence, which would hold in a trial.

Intelligence cooperation with the United States

Information is leaked to German media that the country’s intelligence service BND 2008 will help the US intelligence organization NSA to monitor the French president’s palace, the French Foreign Ministry and the European Commission. Both intelligence agencies must have collected data jointly. The Greens and the Left demand that Secretary of the Interior Thomas de Maiziére resign. He was the highest responsible minister for BND’s operations during the years when the monitoring took place. The information is being widely circulated in German media and Merkel and the German government are accused of bringing the people behind the light in connection with the scandal surrounding the US interception of Merkel’s mobile phone (see October 2013).

The Ministry of Defense announces that hundreds of tanks purchased by the defense industry after the end of the Cold War will be repurchased and modernized to be included in the defense equipment. The measure is seen as a response to the threat posed by Russia during the Ukraine conflict.

Many dead in air crash in France

72 Germans, including 16 schoolchildren, die in a plane crash in France.

Germany has received half a million more migrants than last year. Most of them came from Romania or fled from Syria’s civil war. Over 200,000 of the immigrants applied for asylum, which was a 60 percent increase compared to 2013. Germany has the most asylum seekers in Europe and is the second most popular immigration country after the US.

More money for the defense

Lutz Bachmann resigns after expressing disdain for asylum seekers and after posting photos of himself dressed up for Hitler in 2012.