Almost two out of three Central Africans live in poverty. Life expectancy is among the lowest in the world, while child mortality rates are among the highest. Less than half of the residents have access to basic medical care.

The United Nations Development Agency UNDP placed the Central African Republic in 185th in 187th place among 187 countries in terms of human development.

The general state of health of the population is poor. Extensive malnutrition has reduced people’s resistance to disease. Infectious diseases are common including typhoid, hepatitis A and E, dengue fever and tuberculosis.

Life expectancy is lower than in other countries in the region. In 2000, the life expectancy was only 44 years. In 2013, it had increased to 50 years. 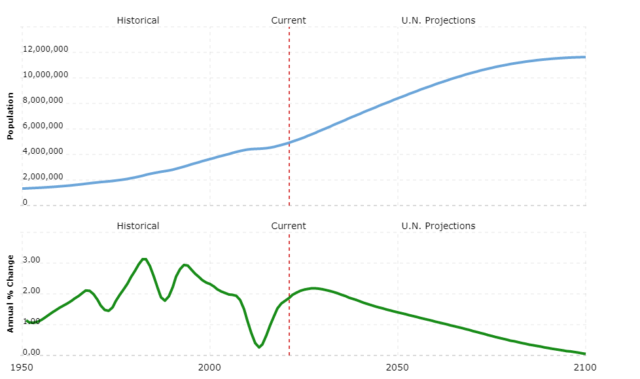 According to the World Bank, maternal mortality, infant mortality and mortality among children under five have decreased since the mid-1990s, but nonetheless, the figures for the Central African Republic are among the highest in the world.

The most common cause of death is malaria, followed by AIDS, polio and insomnia. In 2010, around four percent of adults were living with HIV/AIDS.

Many diseases could be prevented with vaccines and medical treatment. But the healthcare resources are completely insufficient.

There is a great shortage of doctors. There are half a doctor with 10,000 residents and the vast majority are in the capital Bangui. Outside the cities, there are almost no doctors, except a few from international aid organizations.

At the end of 2011, the organization Doctors Without Borders (MSF) raised alarms about the high death rates in the country. One reason for this was that both the state and international aid organizations, despite their promises to the contrary, had cut back on care.

With the civil war that broke out in 2012 (see Modern history), the situation for most people has turned from miserable poverty to a humanitarian disaster. Over 5,000 people have been killed and many more have been injured in battles and assaults. The violence has to a large extent gone beyond civilians.

Up to one million people have been forced to flee their homes and thus lost their livelihood. Farmers have been forced from their lands. Livestock keepers have left their pastures. Workplaces have been destroyed or closed down. Making a living on trade is difficult – and dangerous – when armed groups often rob travelers on the roads.

For several years, the United Nations Food Program (WFP) has distributed food to the needy. But with the war, the need became enormous. More than half of the population depended on international emergency aid for food in the years 2012-2014. Up to 40 percent of the population was estimated to be malnourished. As the aid organizations’ resources diminish, they have become increasingly difficult to obtain food.

Even though the worst fights are over, there are still many threats to human security. Criminal violence has replaced the regular civil war. The militias often act as bandit gangs. They rob, kill and rape beyond the view of the weak police and international peacekeepers.

Rape is common even in peacetime. In a 2009 study, one in seven women in non-conflict-affected areas reported having been raped in the past year. Trafficking in women is also common, as is child abuse. Crimes that happen in the home are rarely reported to the police. Prostitution is common among women. Child prostitution and trafficking in children also occur.

Women are discriminated against in terms of inheritance law and they are underrepresented in public life. Only one in ten government employees are women. Only eleven of the 140 members of the National Assembly are women. Although genital mutilation is prohibited, it is performed on 40 percent of girls.

Proportion of population with access to clean water: 54.1 percent (2015)

Proportion of the population having access to toilets: 25.3 percent (2016)

Public expenditure on health care per person: 16 US dollars (2016)

The United States sends a few hundred military advisers to Uganda, to assist Ugandan, Central African, Congolese and South Sudanese military in the pursuit of the LRA (see also Uganda: Foreign Policy and Defense). Since 2008, according to relief organizations, the LRA has killed at least 2,400 civilians and kidnapped approximately 3,500 children in the Central African Republic, South Sudan and Congo-Kinshasa.

The CPJP rebel group enters into a ceasefire agreement with the government to start peace talks.

Prime Minister Faustin Archange Touadéra forms a new government where most ministers come from the National Kwa Na Kwa National Assembly. Representatives from opposition parties also get seats in the government, and the former rebel leaders from the AFRD and UFRD who entered the government in 2009 retain their ministerial posts.

Former President Ange-Félix Patassé dies in Cameroon as a result of illness.

Kwa Na Kwa wins his own majority in parliament

The second round of parliamentary elections is held. The Bozizétrogna partial alliance The national unification movement Kwa Na Kwa gets its own majority in parliament.

The Constitutional Court approves the choice

The Constitutional Court rejects the opposition’s allegations of electoral fraud and confirms the election result.

Presidential and parliamentary elections are held. Bozizé wins the presidential election already in the first round. The opposition accuses the government of electoral fraud and gets support from international observers.