More than one in three Cameroonians live in poverty and many more live on the border to be considered poor. The social differences are large between different country ends and between city and countryside. However, infant mortality has fallen since the turn of the millennium and life expectancy has increased significantly.

Although Cameroon has many resources, the country falls far short of the UN agency UNDP’s list of human development in the countries of the world, the so-called HDI index. The assessment is based on finances, access to education and care and more.

More than a third of all residents are estimated to live in poverty, according to the World Bank, but significantly more have so little income that they are close to the limit to be classified as poor. In the north and east, poverty has increased in recent years. 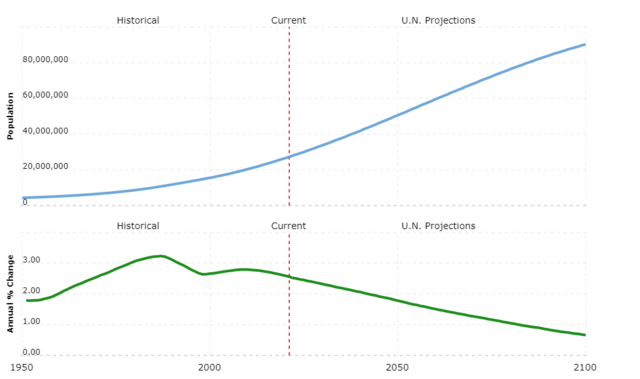 The refugee streams from Nigeria and the Central African Republic (see Population and Languages) have diluted the problems. The refugees live in difficult conditions in camps in the north or along the border with the Central African Republic. Many have also ended up in the slums around the larger cities. The influx of refugees has increased the fight for sources of income and other resources. Even before the refugees arrived, food shortages were prevalent in some parts of the country and it has now worsened. Many children are malnourished.

Access to healthcare is scarce and unevenly distributed. It is most underdeveloped in the northern and western parts. Only a few have access to medicines, which are mostly imported. Many people therefore use traditional natural remedies.

However, some health progress has been made. Child mortality has dropped significantly since the late 1990s and life expectancy has increased. However, around 76 out of 1000 children still die before they turn five compared to 3 out of 1000 in Sweden.

Common diseases include AIDS, malaria, TB, jaundice and gastrointestinal disorders. With international support, vaccination campaigns are being carried out against measles and polio. Malaria and AIDS are the most common causes of death. Nearly 4 percent of adults are estimated to be HIV infected. The vast majority do not have access to free brake medication. They are referred to buy the medication but it costs far more than most people can afford. The prejudices against HIV-infected people are spread and they are often socially isolated.

A social insurance system with, among other things, pensions, child benefits and health insurance covers only those who have a formal employment (about a tenth of the workforce). For the vast majority, the family is the only social safety net.

The woman’s position is weak. Traditionally, women are considered man’s property, and polygamy for men is permitted. A man can prevent his wife from working and she can be deprived of her inheritance. There are no laws that prohibit domestic abuse, and violence against women in the home is common. Rape is also common both inside and outside the home. The paper contains strict laws against rape, but in reality few perpetrators are brought to justice.

About 90 percent of Cameroonian couples are not expected to be formally married, but merely wed according to traditional rules. It often leads to a widow, in the absence of official documents, losing everything she owned with her husband when his relatives seize the property. The government is trying to increase women’s legal security through marriage campaigns. Sometimes hundreds of couples who have lived together for years can be joined together in mass weddings to reduce costs.

Trafficking in human beings occurs. Women are attracted abroad by Western men who spit on them but marry them to pimps. Families are also tricked into giving away their children to unscrupulous people who say they want to stand for their education, but who then sell them to employers in other locations.

Homosexuality is a criminal offense

Marriages are legal from the age of 15, but in the most northern parts of the country it is common for families to marry younger girls. In the north, it is also not uncommon for girls from the age of nine to become pregnant, which poses serious health risks. There are no sure statistics on child marriage, but according to the UN, one third of all teenage girls in the north are forced to get married early. Genital mutilation of girls occurs in some parts of the country, including the furthest north, but to a lesser extent than in neighboring countries.

Children under the age of 14 are not allowed to work, but many still do, especially in agriculture where they work on family plots or on larger plantations such as cocoa cultivations. In urban areas, children often work as street vendors, shoe polishers or servants of the wealthy. Many children are forced to prostitute themselves. Child abuse is common. Particularly vulnerable are lonely refugee children living on the street.

Gay acts can be punishable by years of imprisonment, and gay men are routinely jailed. Discrimination and harassment are common, and therefore homosexuals do not usually display their sexual orientation openly.

Proportion of population with access to clean water: 65.3 percent (2015)

Proportion of the population having access to toilets: 39.1 percent (2017)

Public expenditure on health care as a percentage of GDP: 5.1 percent (2015)