The transition to market economy during the 1990s meant severe hardship for a large part of the population. During the acute crisis in 1997, famine occurred. After the turn of the millennium, living standards increased steadily, but the recent years’ s fluctuations in the world economy have again worsened the situation.

About one-fifth of Bulgarians live below the national poverty level and almost one in ten live in extreme poverty. Half of the pensioners are considered poor. Every fourth of them can pass the minimum pension, which in 2016 amounted to 80 euros a month – a bottom record in the EU.

The situation is particularly difficult also for the unemployed, disabled, street and orphanages and Roma. In 2015, the EU estimated that just over 40 percent of the country’s residents were so poor that they risked social exclusion. Child mortality is significantly higher than the EU average. 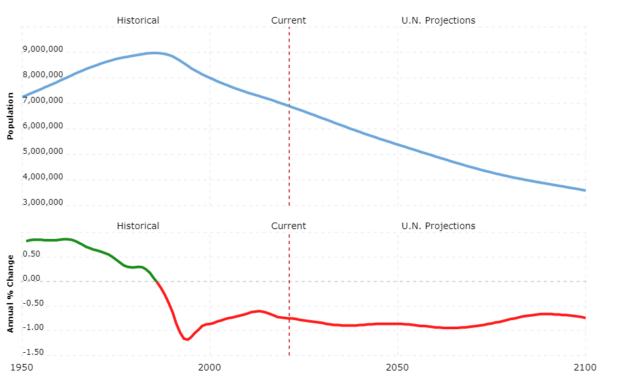 A particularly socially vulnerable group is the Roma. Among them, at least 80 percent are considered poor. The state of health of the Roma is considerably worse than the average in the country, the average life expectancy several years shorter, and the infant mortality rate more than twice as high. Many Roma live in poor housing with poor sanitary conditions. Almost half have no bathroom. Children often quit school early.

The health care system and social security system have been fundamentally transformed since communism, when everyone was entitled to free healthcare. Drastic cuts have been made and the standard of public service is low. The general health insurance is compulsory. Fees are low in primary care.

High crime is a problem. Organized crime syndicates operate in the country. These groups engage in serious crimes, such as drug smuggling, child and women trafficking, illegal gambling, counterfeiting and prostitution.

Despite a goal to close all state orphanages by 2014, the same year nearly 10,000 children were in Bulgarian orphanages. Attempts are made to find foster or adoptive parents, and to support socially vulnerable parents so that they can take care of their children themselves. Many of the abandoned children have physical or mental disabilities.

Proportion of population with access to clean water: 99.3 percent (2015)

Proportion of the population having access to toilets: 86.0 percent (2017)

Public expenditure on health care as a percentage of GDP: 8.2 percent (2015)

The government decides to stop the construction of a new nuclear power plant due to running costs. The decision is made even though one of the two planned reactors is largely complete. The project is put in a bag and revived five years later (see June 2018).

Five Israeli tourists and one Bulgarian bus driver die and some 30 are injured when a suicide bomber strikes a tourist bus at the airport in Burgas on the Black Sea. Israel accuses Iran and claims that the perpetrator belonged to Lebanese Hezbollah. Bulgarian authorities later confirm that Hezbollah was behind the attack. Two men who used passports from Australia and Canada are suspected of planning and conducting the attack.

Former EU Commissioner Meglena Kuneva is transforming Bulgaria’s citizens’ movement into a political party. Kuneva was a candidate in the October 2011 presidential election.

Mafia bosses are punished and disappear

The Supreme Court makes judgments against the “Galevi brothers”, two mafia bosses who were initially released but then sentenced to four and five years in prison respectively. The court also decides on fines and seizing one-third and one-fourth of the men’s assets. A few days after the verdict was announced, the Galevi brothers disappear and become internationally wanted.

The European Commission again criticizes Bulgaria for insufficient work against corruption and organized crime, weaknesses in the country’s electoral system and misappropriation of EU funds.

Gas extraction by fracking is prohibited

Following widespread protests around the country, Bulgaria is withdrawing a permit granted by US energy company Chevron in 2011 to extract natural gas in shale storage. Like other countries in the world (after France), Bulgaria prohibits extraction by so-called hydraulic fracturing, or fracking, which is considered to cause excessive environmental damage (see also Natural Resources and Energy).