The Angolan population suffered severely during the long civil war of 1975–2002 and most residents are still tormented by the suites of the war years. Angola places itself in the bottom tier of the world’s countries in the UN agency’s UNDP ranking of human development. About half the population is expected to live in poverty, that is, survive on less than two dollars a day.

During the Civil War, millions of Angolans were forced to flee – within the country or abroad. It was only the southern provinces of Namib and Huila that largely escaped the war actions. The vast majority of refugees returned home after the end of the war, but there they were usually met by demolished housing and schools, and both healthcare and agriculture were devastated.

The social consequences of the war are still evident, not least among young adults. A large part of these could not attend school during the war years and many orphaned children were exploited by the warring parties as child soldiers. 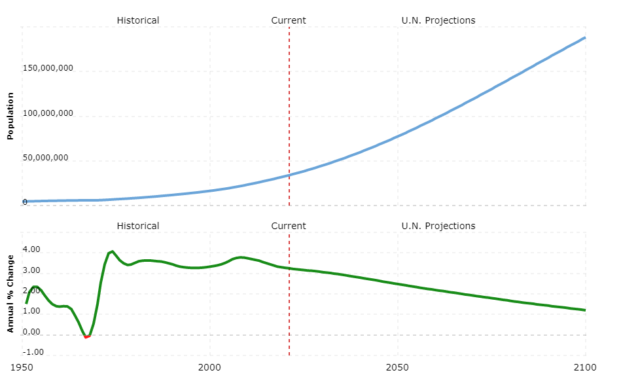 Thousands of children have been driven from rural poverty to urban slums, where they live as begging street children. The children who remain in the countryside often work in agriculture.

Health care is under construction, but work is slow. Most Angolans do not have access to care at a reasonable distance from the home, and although they do, they usually cannot afford to pay for the care. Many people therefore seek help from traditional medicine men. In many places, clean water is also missing at a reasonable distance from the homes.

Angola earns large revenues on the sale of oil, natural gas and diamonds, but the profits are rarely shared by the majority. Instead, the country’s economic and political elite are enriched, and as a result, the social gaps in society are growing.

In the capital Luanda, oil revenues have led to a construction boom. New residential areas and skyscrapers have grown up in the 2010s, often with the help of Chinese money. Luanda has become one of the most expensive cities in the world to live in. Today, the city that was built for a few hundred thousand people is in need of more than six million. Kåkstäder has also grown up in the city center. To prepare land for new construction, thousands of poor Angolans have been relocated to suburbs far outside the center, where all infrastructure and access to water are lacking.

Four out of ten Angolans suffer from malnutrition. Among children under five, about half are malnourished. Infant mortality and mortality among children under five are among the highest in the world. Nowhere else do so many women die during childbirth as in and around the capital Luanda. However, the biggest cause of death is malaria. Tuberculosis, cholera and diarrhea also often lead to death. These diseases have their source in poverty, as they spread where clean water and functioning sewers are not available. Epidemics of polio as well as deadly marburg fever also occur.

Angola has few HIV-infected residents compared to neighboring countries. More than 2 percent of the adult population carry the AIDS virus according to calculations from 2014. The reason for the relatively low proportion of HIV infected is likely that the country was quite isolated from the outside world during the war years. In provinces near the borders, for example towards Namibia, the proportion is several times higher. The government has conducted large awareness campaigns on HIV.

At least 70,000 residents have been forced to amputate any body part as a result of mines exploding. No other country in the world has an equally high proportion of residents who are amputated due to mines. Although efforts have been made to clear mines, a large number of undetected mines are estimated to remain in the ground. It is mainly women who are hit by the mines when they are out to fetch firewood or water.

The Angolan women have a relatively strong position in society and they often take an active part in both political and economic life. The legislation gives men and women equal rights and gender discrimination is prohibited. Despite this, women usually have lower education than men and more girls than boys leave school early. This is often due to teenage pregnancies or the need for girls to work in the home. Especially in the countryside there is violence and abuse of women. Child abuse is also common. Sexual sexual intercourse is prohibited by a law from colonial times, but penalties are not imposed.

The family and the family are central social and economic networks in a country where society’s common social security networks do not work. Only a small part of the Angolans have wage jobs and those who have a job often share their income to unemployed relatives. Several generations usually live together in the same household. Cousins ​​are often described as brothers and sisters, and more adults than parents take part in the children’s upbringing.

Many Angolans have lost family members in the war and many homes have been torn apart due to the fighting. After the war, there are significantly more women than men, and in rural areas, women often act as heads of families. Divorce is common in some areas, not only because of the war but also of tradition. Often, spouses live apart because they have to seek livelihood in each direction.

Proportion of population with access to clean water: 41.0 percent (2015)

Proportion of the population having access to toilets: 49.9 percent (2017)

Public expenditure on health care as a percentage of GDP: 2.9 percent (2015)

Parliamentary elections are held for the first time in 16 years

Parliamentary elections are held. The MPLA government wins as expected a landslide victory and receives 175 of the 220 seats.