The gap between poor and rich is great in Algeria. Around a quarter of the population is estimated to live in poverty. The most widespread is poverty among landless farmers in the mountains in the north and in the border areas to the desert in the south.

The civil war in the 1990s hit the Algerians hard. Up to 200,000 lost their lives, most civilians. Thousands of the victims were children. Violence has declined sharply since the 1990s.

The housing shortage is screaming and is partly due to the rapid move into the cities. Congestion helps to prevent infectious diseases such as tuberculosis. 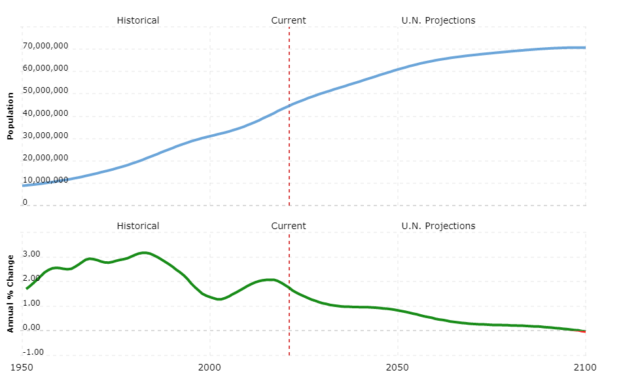 Health care improved significantly after independence in 1962, but the standard soon dropped again due to a shortage of trained personnel, technical equipment and medicines. During the 1990s civil war, the care situation worsened even more and medicines for huge amounts had to be imported from France. Nowadays health care in the big cities is far better than in rural areas, where the shortage of staff, medicines and equipment is still great. Health care has been free since the 1970s. Success is also being reported for disease control, such as the country being declared malaria-free in 2019 after three years with no cases identified.

Algeria’s long-standing political ties with China (see Foreign Policy and Defense) also leave traces in the health field. Shortly after independence, there is a permanent exchange, where Algeria has access to Chinese doctors in areas such as obstetrics and surgery. Staff are recruited in Hubei Province, which happened to be the starting point for covid-19 disease. In connection with the virus pandemic 2020, part of the assistance to Algeria came from China.

The average age of the population is low, and youth unemployment is one of the country’s major problems.

Government employees and certain occupational groups are covered by a social insurance system with the right to, among other things, pensions and disability benefits, but pension systems are insufficient.

According to the Constitution, women and men are equal, but in reality women are discriminated against. The law is partly based on strict Islamic law, Sharia. Women have the right to seek work, divorce, own their own home and take care of the children on their own. A man may have several wives, but it is unusual. Most marriages are arranged. Forced marriage is not allowed. Nowadays, the nuclear family does not live with the man’s family of origin to the same extent as before independence, but creates their own home. It is not uncommon for many children. Child rearing is usually taken care of by the women.

The women who work outside the home are mainly found in education, health care and the judiciary.

Violence against women is common. According to Algerian statistics, 100–200 women die a year after domestic abuse. Women were also disproportionately hit by violence and abuse during the civil war. Many who were subjected to sexual violence were displaced by their families and have found it difficult to get help from the state.

Domestic violence, including marital rape, is not punishable. It is difficult to run a legal process within the family.

Abortion is prohibited except if women’s health is at stake.

Homosexuality is prohibited by law and predominantly taboo in society. Despite this, there are open networks with support features for gays.

Proportion of population with access to clean water: 93.5 percent (2015)

Proportion of the population having access to toilets: 87.6 percent (2017)

Public expenditure on health care as a percentage of GDP: 7.1 percent (2015)

Purge in the intelligence service

Bouteflika deprives the DRS intelligence service of three sub-units, and three DRS officers were forced to retire while a fourth was put under investigation.

The state prosecutor issues an international arrest warrant for former Oil Minister Chakib Khelil for his role in the now widening corruption scandal within Sonatrach (see January 2010). Khelil’s wife and two children are also among a total of eight people who are wanted. Khelil is abroad.

Worried at the border

Algeria strengthens its troops presence in the border area against Tunisia, after eight Tunisian soldiers were killed on the other side of the border. Algeria and Tunisia have also increased the exchange of intelligence information on Islamists active in the area.

President back after sick leave

President Bouteflika returns from France where he was taken in April after being described as a mini-stroke. The 76-year-old president’s absence has caused some criticism. Both doctors and Prime Minister Sellal have assured that there is no danger.

More than 30 al-Qaeda- linked terrorists attack the Tigantourine natural gas plant in In Amenas, in the southeast near the border with Libya. Over 800 employees are taken hostage. The army surrounds the facility and a hostage frame follows. When the drama is over after three days, at least 39 foreign nationals and 29 terrorists have been killed. The foreigners include citizens from, among others, Norway and the United Kingdom; the gas field is managed by the state-owned oil company Sonatrach together with British BP and Norwegian Statoil. The perpetrators are said to have been Algerians who crossed the border from Libya. Their leader Mokthar Belmokthar is a former commander of Aqim who now leads a group called al-Murabitoun.