Albania is usually referred to as one of Europe’s poorest countries. However, thanks to strong economic growth during the first decade of the 2000s, poverty has been at least partially combated. Nowadays, about one in seven Albanians are estimated to live in poverty.

Most of the poor live in the isolated mountain regions, although poverty also occurs in slum-like areas of the cities. Many can only do it thanks to their own farms and money that relatives abroad send home.

Conditions are generally worse for the Roma population than for other residents. The Romans have the worst housing, receive the worst education and are more often than others exposed to crime. Anti-discrimination laws exist but are often inadequate or often not complied with.

Child mortality has decreased but is still slightly higher than in most neighboring countries. 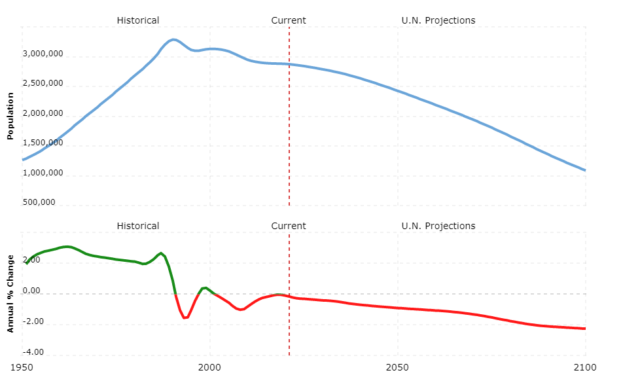 When collective agriculture was discontinued and the detention camps were closed after the fall of the communist regime in 1991, the urban population is estimated to have increased by half a million people, which meant that slums grew with limited access to water and sewage. Nowadays, most Albanians have access to clean water and simpler wastewater systems, although there are many disruptions in water supply.

Health care is inadequate, especially in rural areas. The hospitals are often in poor condition and lack equipment. There is just over one doctor per 1,000 residents, the lower figure in the Balkans.

The social security systems give entitlement to pension, sickness benefit and parental leave. There have been investments in introducing social assistance and unemployment benefits, but the resources for this are small. Contributions are low and include only certain groups. Pension payments are a heavy expense for the state. Reforms from 2014 and 2015 mean that the retirement age will be raised to 67 for both men and women by 2056.

Albanian society is largely characterized by customer thinking. Especially in the countryside, the residents’ loyalty to the family and the clan is strong. These social networks have been important when society’s insurance system fails. An old law of revenge, the canon law, which means that a murder is answered by killing a male relative of the murderer, has come to life after the fall of communism. Especially in northern Albania, many families are believed to live isolated in their homes because of fear of revenge. According to the canon, the home is a protected zone, but outside it children also risk being murdered.

Albania is often described as a distinctly patriarchal society, where the woman is subordinate to the man. This is particularly evident in the countryside and the north. Forced marriage occurs. Domestic violence and discrimination against women are among the country’s most common violations of human rights. The gender differences are most noticeable in the labor market and in education. However, the representation of women in Parliament has steadily increased during the 2000s and 2010s.

Governments have made efforts to strengthen children’s rights, but there are still many shortcomings. Child labor occurs. Most of the street children are of Roman origin.

Homosexuality was decriminalized in 1995 and LGBT people are protected by law against discrimination, but same-sex couples have neither the right to marry nor adopt children, nor do they have the same legal protection as heterosexual couples. The tolerance of same-sex couples is limited among the general public.

Proportion of population with access to clean water: 91.4 percent (2015)

Proportion of the population having access to toilets: 97.7 percent (2017)

The EU rejects Albania’s request to be a candidate country for membership but abolishes the visa requirement for Albanian citizens who wish to enter the Union.

The Minister of Economy is forced to resign

Finance Minister Dritan Prifti is accused of involvement in a corruption business and is forced to leave his post.

The Socialist Party PS launches a civil disobedience campaign against the government to get a recast of the votes in the 2009 elections. A number of leading PS politicians are starving. Ever since the election in July of the previous year, PS members have periodically boycotted the work in Parliament in protest of what they consider to be election fraud.